Finding adventure and solace on the Altamaha River The Altamaha River cuts a winding swath through the Georgia wilderness.

We stood leaning on our paddles, wearing boonie hats and life vests and the floppy tutus of our kayak skirts. We were posing for a photograph, like so many bright-eyed paddlers before us, ready to slide our boats into the “Little Amazon” of Georgia—the Altamaha River.

It was March 2003, and the river was running high and cold and dark, growling at its banks. This 137-mile serpent of freshwater slithers and kinks across the state toward the coast, delivering the alluvium that helped build the Georgia sea islands—my birthplace. There are bald eagles here, glaring from their roosts, and alligators sun themselves along the banks. Old-growth cypress trees stand as tall as castle turrets, and the depths are storied for century-old sturgeon the size of ships’ cannons. Some even say the river is home to a sea monster: the Altamahaha. A survivor of the Mesozoic era,
not unlike the creature of Loch Ness, “Altie” still swims on a greening billboard near the visitors’ center of Darien, Georgia, urging interstate travelers to stop for a visit.

At that time, I was at the University of Georgia, and this was my spring break, a three-day paddle trip down the Altamaha with three of my closest friends. I had no idea that, a decade later, this waterway would morph into the foundation of my second novel, The River of Kings.

The second afternoon, we stopped to rest at a bend in the river, climbing a small bank in search of shade. There, to our surprise, we found a footpath leading into the woods. We were miles from any known settlements or residences. The Nature Conservancy has called the Altamaha one of the seventy-five Last Great Places on Earth, and this lack of civilization is the main reason. The river is undammed—the largest such river in the South, and one of only about forty major free-flowing rivers left in the country. Roads cross it just five times along its course, and in the nineties, the state outlawed the float houses (“shanty boats”) that once lined the banks. Curious, we followed the trail into the woods. Soon we were crossing the gutted carcass of an alligator gar—a dinosaur of a fish, with armored skin and a toothed snout—left like a warning across our path. A message more powerful than any posted sign.

What we found next stopped us dead. Before us stood a pair of saplings, lashed to form a makeshift arbor over the path. The skulls of small animals dangled on lengths of fishing line, their eye sockets twisting back and forth in the breeze, as if keeping watch. Beyond them stood a rudimentary shed, log built and tin roofed, with a burlap flap for a door.

Because we were fearless and dumb, we decided to explore the place, armed with only a tiny popgun and our overabundant hormones. The shack was empty, thank God. But the question of what it was there for, and why its owners had tried so hard to warn us away, haunts me still.

A decade later, I returned to the Altamaha, intending to write a short story set on the river. I had been gone for years, living and working in Buenos Aires, San Francisco, and Asheville and Wilmington, North Carolina, with fewer visits home than I would have liked. Three months earlier, I had watched my wife and rescued bird dog, Waylon, leave for Texas for good. I felt hollowed out, strange, the ground slippery beneath my feet. I was searching for something firm. A way forward.

We traveled in a powerboat this time, upstream. I was with the men who first led me to the river, and whose love of it remains undiminished. Men I regard as brothers. There was my oldest friend, Whit Dawson, who was on that college paddle trip, and the renowned coastal photographer Ben Galland.

I watched them squint into the wind, the boat pounding up the old bends they knew so well. I have known these men since boyhood, their faces weathered now with the first riverine creases of age and grief. As was mine. We were changed, as was the river, but so much remained. The old creeks and bluffs and sloughs. Our old friendship. Our pain.

So began a rash of research trips, as my short story evolved into a novel. We would search the scrawling waters for landmarks I was writing into the book, visiting Alligator Congress and Rifle Cut and Stud Horse Creek. We would witness what we thought for one surreal moment to be the Altamaha-ha herself—and which, in fact, turned out to be nearly as strange: a large feral hog swimming across the river. We would be trapped far upriver by a grounded boat and have to navigate home by flashlights, watching the bright jewels of alligator eyes burn along the banks. We would search the river for ancient logging equipment and virgin cypress more than a millennium old.

We never found that shack again, but we discovered so much more. Here was a river with its own mythology, complete with Spanish conquistadores and Nazi submarines, mutant catfish and trees born a thousand years before the American Revolution. A river rumored to harbor its own sea monster, not to mention the site of the oldest fortified European settlement in all of North America, Fort Caroline. Here was a river that had abetted the deforestation of my home state, carrying timber rafts the size of basketball courts down to the coastal sawmills. A river itself endangered by pulp mills and nuclear power plants. A river as beautiful and wild and savage as anything left on this earth.

Here was the best medicine of all. Home. 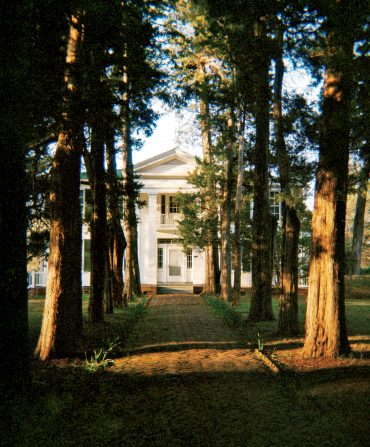