A deep dive into the architecture of Jefferson County, West Virginia, inspires a handsome, historic puzzle of a house 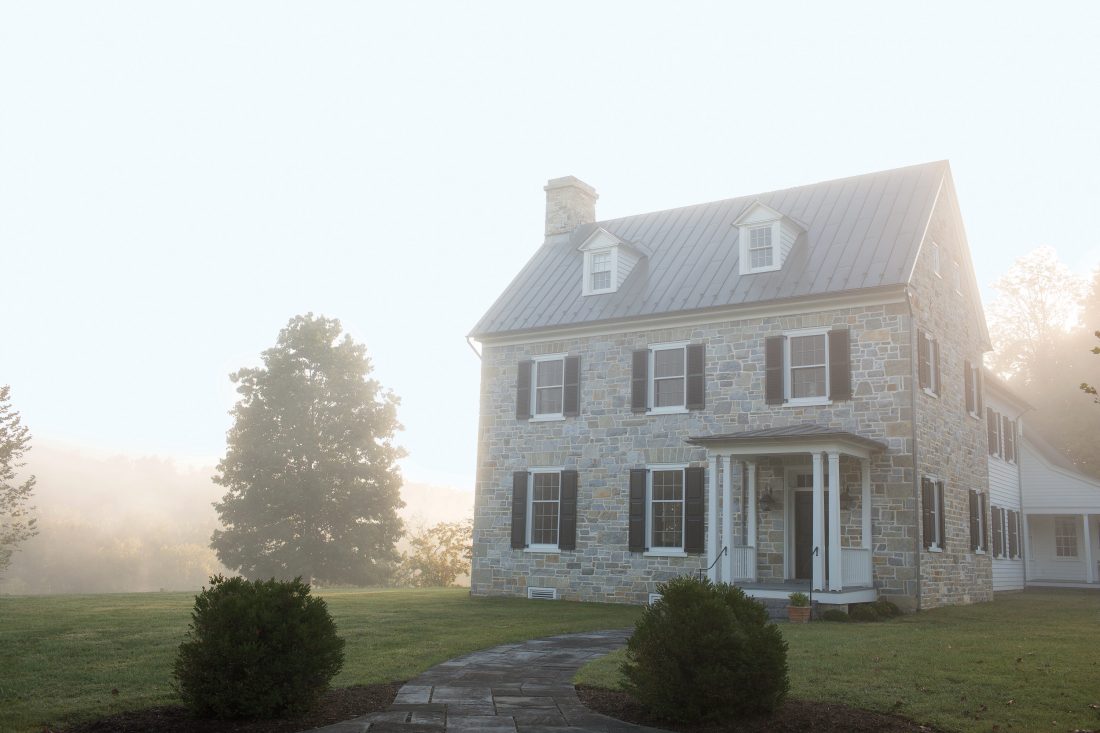 The facade of John C. Allen, Jr.'s twenty-first-century, in locally mined limestone, was built to look as if it were constructed in the early 1800s.

John C. Allen, Jr., lives in a ten-year-old house with a two-hundred-year-old backstory punctuated by milestones—construction of a handsome circa-1800 limestone main wing, loss due to fire of an attached log kitchen, rebuilding of a frame addition around the surviving kitchen chimney, a mid-nineteenth-century roof upgrade from wood shingles to fire-resistant metal thanks to the arrival of the B&O Railroad in 1835. The history is meticulously specific and also completely fictional. Allen and Andy Lewis, a partner in the Middleburg, Virginia, firm of Neumann Lewis Buchanan Architects, fabricated the whole timeline. But for a good reason.

As with all stories, a little context helps. The best way to make a brand-new 7,000-square-foot house fit in with its period neighbors, the architect realized, was to have it “evolve over generations.” Hence the storyboard, which guided the design by acting as a wayfinding system through the home’s imagined past. Allen’s odyssey began fifteen years ago, when he moved from Georgia back to his home state of West Virginia to join the family highway contracting business. He purchased 270 acres near Shepherdstown, in the Eastern Panhandle—a particularly stunning piece of land across the Potomac River from the hallowed Antietam National Battlefield—and began planning a new house. Allen, who is now forty-five, envisioned something traditional.

“I didn’t want it to be a blight on the landscape,” he says. “I wanted a house that belongs here.”

While studying local architecture, the amateur preservationist grew curious about how tiny Jefferson County came to boast so many fine eighteenth- and early nineteenth-century houses, most of them made from hand-finished limestone. What factors, he wondered, shaped the local architectural vernacular? He learned about the region’s geographical isolation, its limestone underpinnings, its concentrated wealth from wheat exports. The deeper Allen dug, the more he hungered to know.

By 2003, Allen was obsessed and embarked on an exhaustive survey of every pre-1835 Jefferson County house still standing, that being the year railroad access changed everything. He knocked on doors and asked strangers if he could measure rooms, crawl around attics and basements, and sketch floor plans. He began to recognize recurring patterns in the masonry, joinery, and molding profiles and, he says, to identify “house types in Jefferson County that you wouldn’t find ten miles into the next county over.” Allen was so taken with the unique architecture of the area that he penned a book on the subject, Uncommon Vernacular, in 2011.

Two wings added to the limestone facade were made to look as if they were built over many decades.

Visitors to Vandalia, which Allen named for a proposed eighteenth-century British colony that would have included parts of what is now West Virginia and Kentucky, encounter an unpretentious three-bay limestone facade designed to match those built between 1800 and 1815. The rest of the house telegraphs behind in shotgun style. The middle wing, designed to resemble an 1840 renovation, reflects the Greek Revival aesthetic popular at the time. The plain, working kitchen “dates” to the early twentieth century and features a large open cooking hearth that survived the fictional fire.

The historical detail continues in the finish work. Andy Lewis custom-designed period-appropriate shutter dogs and light fixtures and commissioned a local metalsmith, Daniel Tokar, to craft them. He even harvested walnuts from the property and made an old-fashioned stain for the stair railing—messy, labor-intensive work inspired by his collaboration with Allen. “At the beginning of this project, my knowledge exceeded John’s,” Lewis says, “but by the end, his vastly exceeded mine. He’s an excellent scholar.”

Both homeowner and architect admit they didn’t follow the storyboard to a point of rigidity with the interior, where they made concessions to modern living. For example, Vandalia has air-conditioning, although Allen and his son can often wait until August to turn it on, thanks to the home’s siting, which helps it catch river breezes.

To strike a balance between past and present with the furnishings, Allen brought in the Washington, D.C., interior designer Darryl Carter. Carter added the right amount of modernity with a few sleek items and by covering Allen’s antique pieces in linen. For the walls, Carter chose a soft palette. “Neutrals don’t compete with the architecture,” he says. “They create a crisp envelope that sets off the antiques’ classical forms.”

If Allen’s original goal was to build a house perfectly suited to its surroundings, he succeeded and then some. “Vandalia,” he says, “makes us feel like we belong.”