A Louisiana maverick brings an antebellum Creole cottage back to life

By David Thier
Styling by Suzonne Stirling 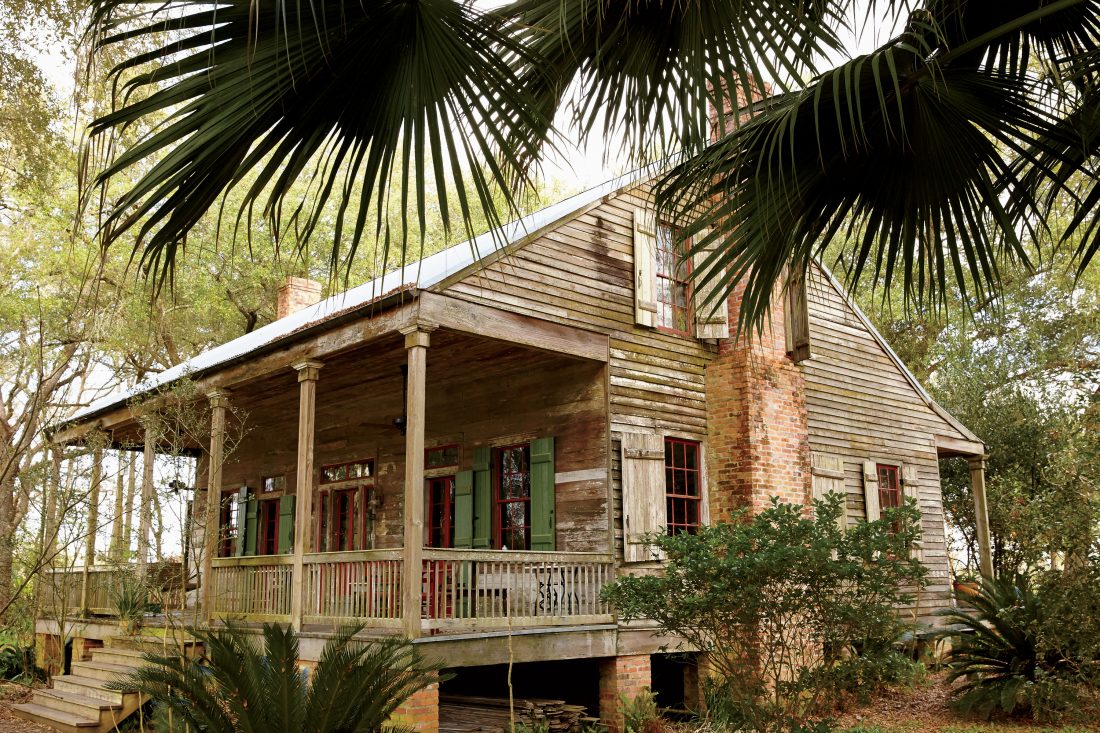 Built in the 1840's, Stephen Stirling's cottage is made of cypress and designed to weather whatever Louisiana dishes out.

The loan officer was staring at a photo of a wrecked nineteenth-century cottage. Beaten and broken, it had flooded in two hurricanes. The roof was caved in. When Stephen Stirling said he planned on living in it, the officer was incredulous.

“But it had a good floor plan!” Stirling says, enthusiasm bubbling out of a ruddy face wreathed by a salt-and-pepper beard. “Big rooms, a center hallway, tall ceilings, and it had porches!” A chemical plant operator from Franklin, Louisiana, Stirling grew up in a suburban tract home, of the sort that you might see anywhere in the country. But he had long been fascinated by the old Creole homes nearby—unique and dripping with a sense of place. “I used to always see these houses vacant,” he says. “They called to me.” And here was his chance. “This is my project, and I’m going through with it,” he told the loan officer.

Today, Stirling’s house, a Creole cottage built in the 1840s, stands as a monument to feverish preservation. Set between a sugarcane field and Bayou Teche, it’s a modestly sized home by modern standards, but the peaked tin roof and forty-two-foot-wide gallery porch hold their own against the impressive live oaks that flank the long dirt driveway. Built for the Louisiana climate, the cottage is raised about three feet off the ground to guard against flooding, the roof steeply pitched to quickly funnel rain. Every room opens to the outside to keep a good breeze flowing in the stifling heat. Walls and floorboards are made of cypress, capable of withstanding humidity and regular summer downpours.

Stirling still laughs when he remembers how naive he was at the beginning. A carpenter in his off time, he trucked the home twenty miles from the coast to his property, thinking the project might take a year’s worth of work. It turned into five years of sanding, nailing, painting, rebuilding, and reconfiguring alongside his wife, Suzanne. They had to nearly dismantle the entire porch at one point, sticking a playing card on each beam to keep the pieces in order. “I think I had to touch every board in that house at least once during the process,” he says.

Stirling with his dogs, Billy and Sally.

He was equally meticulous when it came to the home’s furnishings, filling each room with antiques authentic to the cottage’s age and place. Some pieces were found at auction, like the twelve-foot-tall walnut cabinet that came out of Mount Carmel Convent in New Orleans. Others were castoffs. “There’s a running joke that I’m the only guy who goes to the garbage dump and comes back with more than I left with,” Stirling says.

His older son sleeps in a particularly sought-after hand-tooled cherry Creole bed with brass feet from the 1830s that a buddy found in nearby Washington. There are only about fifty of them in the world. Tabletops are covered with the spoils of Stirling’s relic hunting, a hobby that involves combing the cane fields after a good rain. “You’ll always find marbles and little porcelain doll arms and legs,” he says. “But the Civil War bullets are the most exciting.”

Stirling pulled the Polito’s sign in his kitchen out of a garbage pile after the local hamburger joint got an upgrade.

A stroll out to Stirling’s workshop shows that he’s not quite finished yet. It’s stacked high with antique shutters, scraps of wood, doors, and fixtures, which he’s saving for his next project, an old sugar boiler’s bunkhouse that he recently rescued and moved to the property. He plans to renovate it for use as a garçonnière, a traditional Creole structure built to house the oldest son of the family. In his front hallway, a print of a home almost exactly like his by the famed Louisiana artist Marie Adrien Persac hangs as a kind of true north for his efforts.

But although antiques and artifacts abound, this is not a museum. Stirling has raised three children here, along with two dogs and a couple of cats. For him, those kids are a large part of why he does what he does. “I want my children to grow up with the things that meant something to me,” he says.