Anyone whose football team has been on the receiving end of what we in the South like to call a good old fashioned whuppin’ will have sympathy for the 1916 Cumberland University squad, such as they were. A football commemorating the historic game.

This Friday, October 7, marks the 100-year anniversary of Georgia Tech’s 222–0 win over the Lebanon, Tennessee, school, a feat that still goes down as the most lopsided victory in college pigskin history. But as a Chicago Tribune account of the matchup relates, this was more than just a simple game gone awry—it was revenge.

The legendary John Heisman—he of the trophy—coached the Georgia Tech football and baseball team. In the spring of 1916, when his boys hit the diamond against Cumberland, the latter team ran up the score on his Yellow Jackets. Heisman was livid; he suspected Cumberland had rigged its roster with pros from Nashville. By fall, Cumberland, then on the brink of bankruptcy, had suspended its football team—but forgot to tell Heisman. When it came time for them to play Georgia Tech, Heisman demanded the game still go on, or Cumberland would have to pay a $3,000 penalty—a potential death blow to the already strapped school.

So a student manager recruited thirteen Kappa Sigma fraternity brothers—and good sports—to head to Atlanta. In an August interview with The Tennessean, Lebanon resident and Cumberland grad Sam Hatcher—who recently released a fictionalized take on the contest called Heisman’s First Trophy—credited the decision to play with keeping the school open. The bad news: The slapdash group wouldn’t just be pitted against a good football team. Heisman’s squad was great—comprised of kids who would go on to win the National Championship the next year. What followed was a drubbin’, a thrashin’, a shellackin’, whatever dropped-“g” gerund you prefer. Neither team tallied a first down. Tech scored on each of its possessions before requiring one, and Cumberland simply never got that far. At one point, the overwhelmed Kappa Sigs decided just to punt as soon as they got the ball. 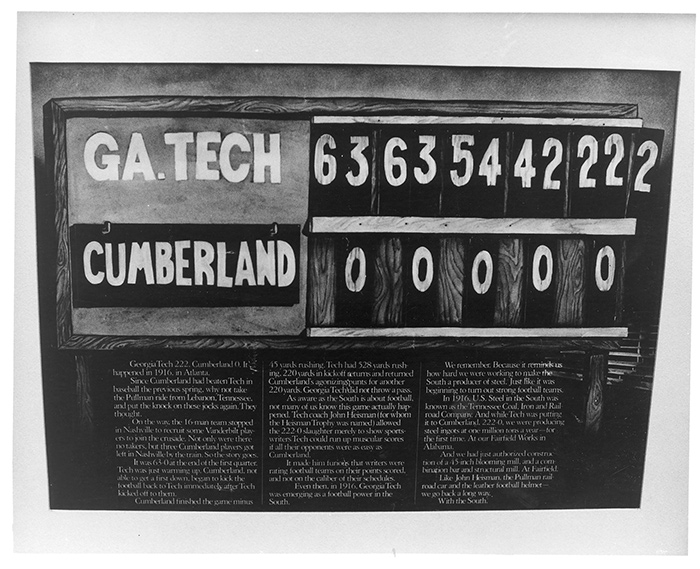 Even the scoreboard from the game looks lopsided.

Thankfully, Heisman green-lit the mercy rule, cutting the final two quarters to twelve minutes instead of fifteen, a policy already used a few times in the 2016 season by the likes of the ACC’s Clemson, in its 59–0 defeat of South Carolina State, and the SEC’s Missouri Tigers, during a 79–0 takedown of Delaware State.

High scores, yes. But at least no fraternity members were harmed.