The Magic of Moss 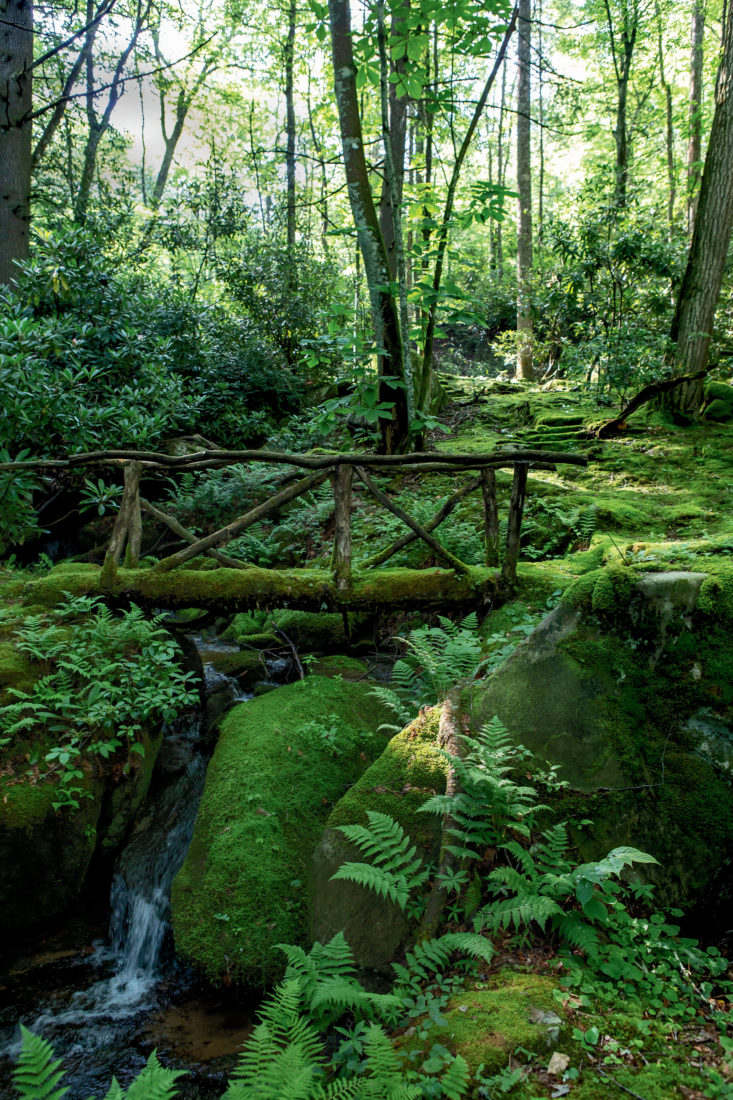 A narrow bridge above the creek that divides Jacquelyn Rogow’s moss garden.

There is no room for bad feelings in the moss garden. No anxious thoughts are allowed, explains Jacquelyn Rogow as she stretches out her arms and balance-beam walks a narrow wooden bridge over a tinkling creek. Swaths of moss in every shade—olive, lime, sage, chartreuse; you never knew there could be so many greens—climb the hill above her, over logs and down rocks, a nearly two-acre mountainside nirvana of soft tufts. “Under the trees here can be ten degrees cooler than outside the garden,” Rogow says, her eyes wandering across a carpet of moss edged by ferns. “It’s a place of personal refuge. If things get hectic or harried or out of control in my life or on my farm or with the news, I can come in here, take a deep breath, and cool off, temperature wise and emotionally.”

Rogow’s farm rolls over six hundred acres in Western North Carolina near DuPont State Forest. More than anywhere else on her property, this little patch of green nuzzled beside a creek and cascading falls draws Rogow back again and again. In the shadow of maples and birches, at least thirty types of bryophytes—mosses and the similar (and perhaps appropriately fairy-tale-sounding) plants called liverworts and hornworts—grow here, along with pockets of native flowers such as creamy white rhododendron, yellow trout lily, and scarlet trillium.

Although it looks like an oasis that sprang organically from the mountainside, Rogow, her husband, Bruce, and local landscaper Mike Lee started the garden two decades ago. After purchasing the land in 1994, Rogow explored the creek’s path after hearing local rumors about a moonshine operation that once thrived near here. She found a tangle of muscadine vines, laurel, and blackberry brambles covering a boulder-studded hillside, and was at first tempted to let it grow wild. Then travel inspired an idea. “Bruce and I took a trip to Cambodia, and while visiting the temples of Angkor Wat, we saw these huge rocks with moss and trees growing over them,” Rogow says. “When I came home to this spot that had seemed impenetrable, I asked Mike to help me clear a space to take a chair back there.” Sitting beside the creek, Rogow dreamed up a quiet haven, a place that honored the mountain landscape and the hundreds of moss varieties native to the area. Over the following months, Lee trimmed away the overgrowth. At the same time, as he and Rogow worked on shaping other areas of the land into a homesite and entertaining spots, they gathered moss, gnarled roots, trimmed limbs, and rocks of all shapes and sizes, and carried them to the shaded creek. “We picked up moss from all over the mountain, and we would put it down here,” Rogow says. “Then I might find a special rock or a piece of wood that looked like driftwood and incorporate it. The moss would cover it, a natural topiary.”

Using tree limbs, stumps, and rocks, Lee built bridges, seats, walkways, and steps into the hillside. “Jacquelyn was certain we would find all the materials on the property, and she didn’t want me to buy anything,” Lee says with a laugh. “But I did buy bolts and screws and hardware to build the little bridges all over, and those are the only nonnatural things in the whole garden.”

The moss meandered over months and years to cover nearly every surface, the damp, shady forest the ideal environment for the bryophytes. Lee nicknamed and can describe each: There’s pincushion moss, log moss, wolf’s moss, turkey brush moss, princess pine moss, apple moss that has a little stem and yellow spores, and lacy moss that looks like miniature ferns. In the fall, as leaves turn gold and orange around the property, the moss stays green. The garden’s only major annual maintenance requirement is blowing away the fallen leaves so the moss can breathe and see sun. On cool evenings, Rogow invites friends to ramble through the garden at cocktail hour, and she listens to their reactions. “They’ll start talking about mystery and magic, and they might even look for fairies,” Rogow says. She feels the enchantment, too. “I notice the little things that happen here—a bug crawling or a leaf floating down and landing on the moss. If there’s a gentle mist, it’s like walking in a snow globe. Everything here is framed in a beautiful calmness.”