Ride along with Jessica Lange as the award-winning actor and photographer captures the Mississippi Delta with her camera, one striking image at a time About twenty minutes before I pulled into the Memphis airport to pick up my then-acquaintance Jessica Lange, I was nearly stopped dead by an unnerving thought. It was 2012 and Jessica, who is also an accomplished photographer, had been working on a book of black-and-white images loosely pegged to Highway 61, the road that parallels the Mississippi River from her birthplace (Minnesota) to a couple of hundred miles past mine (Mississippi). I’d happily agreed to serve as her guide through the highway’s most fabled stretch—the one running through the Delta, where Robert Johnson is said to have sold his soul to the devil, where Bessie Smith was killed in a car wreck, where countless bluesmen penned odes to “the longest road I know.” Late as usual, I’d been driving like a crazy person, concerned, primarily, with getting there. And then it occurred to me that I was about to spend four days in a car with a woman who is not only the most gifted actress of her generation, but also a full-fledged movie star, winner of Oscars and Emmys, breathtaking portrayer of Frances Farmer and Patsy Cline. We’d met many times, but now we’d be bunking together in my childhood home. Jessica Lange with her Leica on an Indian mound overlooking the Mississippi River in Memphis.

I needn’t have worried. A road trip through my lifelong stomping grounds is one of my very favorite ways to spend time, and Jessica proved to be the most stalwart of companions. She’d just been through a breakup, I was warily contemplating one, and we were both ready to blow off some steam. (I’m pretty sure the first sentence I uttered after we’d thrown her bags in the trunk was “Everything in my life is up for grabs.”) We laughed at ourselves and roared out of Memphis en route to Tunica and lunch at the Blue & White Café (bacon and eggs for her, a cheeseburger for me). Next up was Lula, nineteen miles south, where we’d heard word of a picturesque graveyard. While Jessica snapped away at the disorderly pile of 150-year-old headstones with her Leica, I repaired to the only two remotely visible business enterprises in town: one beat-up house trailer selling beer and the other selling cigarettes.

Thus plied with two packs of Marlboro Lights and a sack of ice-cold Buds, we made our way to my hometown of Greenville, stopping along the way first in Alligator and then Duncan, where we detoured onto Highway 1, a virtual ghost road that even more closely hugs the river. We ate dinner every night at Doe’s Eat Place and hit the trail every morning with only the loosest itinerary in mind. We discovered abandoned churches and primeval cypress brakes, hung out in blues bars and juke joints (including a packed Po’ Monkey’s a few years before its owner died and it was locked up indefinitely). We dipped our toes in the Mississippi, watched cotton being ginned, and encountered no end of heartbreaking stray dogs that I struggled to keep Jessica, an inveterate softy, from immediately adopting.

It was a trip we’d repeat at least five more times in as many years, both of us pulled back and back again to the Delta’s stark landscape and the river that rumbles close by. As it turns out, we’ve both “got muddy water in our blood” (to borrow a quote from my friend the songwriter Jimmy Phillips) and a homing instinct to match—each of us has a place in New Orleans (she negotiated the purchase of hers from the passenger seat of my Cadillac), while she keeps a cabin in northern Minnesota and I’m currently building my own place in Greenville. I loved that she loved “my” part of 61 as much as I did; I was in awe of her utter intrepidness. On our first trip, when a planned boat ride to a sandbar was rained out, we took off in the downpour to Howard Brent’s vast hunting camp near Yazoo City. An alligator hunt had just ended—if we drove fast, Howard told us over the phone, we’d get there in time for Jessica to shoot the skinning. So it was that I held the umbrella as she documented the deft removal of the hide of a gator so big it had just chomped on the motor of a jon boat. Afterward, we joined the waterlogged hunters in the kitchen for egg casserole and coffee and biscuits to fortify us for our next stops, the ruins of Windsor and Vicksburg’s Civil War battlefield.

Though her book is almost finished (and at this point she could make at least three more out of the Delta photos alone), I know neither of us will ever tire of our sojourns. Over the miles, I’ve been witness as she’s narrated—in images that so eerily illuminate a moment and a place—my very history. “She’s really that old-fashioned thing,” says Hilton Als, the Pulitzer Prize–winning critic for the New Yorker. “She has an immense love of storytelling. When you think of her as an actor or a photographer, there’s not a lot of difference.” She’s also deeply connected to the soil itself. “When she plays Jewell Ivy in Country or Mary Tyrone on Broadway, she knows the land better than anyone,” Als says. “That’s why this project is so great. It really speaks to her love of America in all its weirdness and loneliness and grandeur. Somebody should give her one of those presidential medals.” 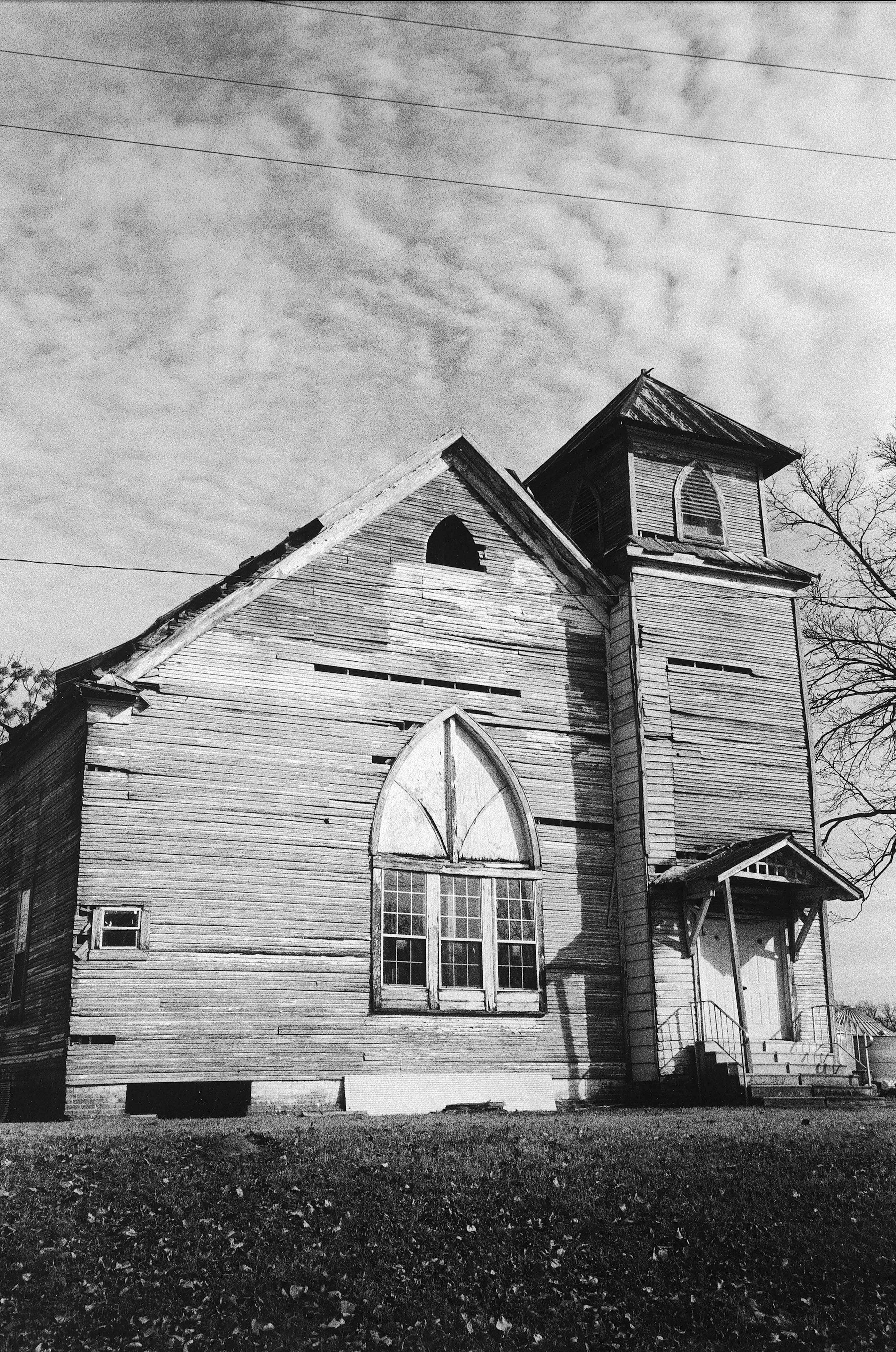 Estill, Mississippi, was once a thriving little town, an agricultural hub with a busy cotton gin and this once-active Baptist church that would have been the “church home” to hundreds of African Americans who mostly labored on the surrounding farmland. These days maybe fifty people remain, and the church, located on Old Highway 61 just across from Deer Creek, has been empty for decades. In my childhood, the landscape was marked by countless of these structures, but too many have since fallen into disrepair or disappeared altogether. This particular church is in better shape than most but also a tiny bit spooky. We peered through windows that revealed hymnals on the pews and an open Bible in the pulpit—as though the members walked out one Sunday only to be swept up by the rapture. The grain bin just visible on the right is a nice reminder that churches and agriculture were the twin pillars of these Delta communities. 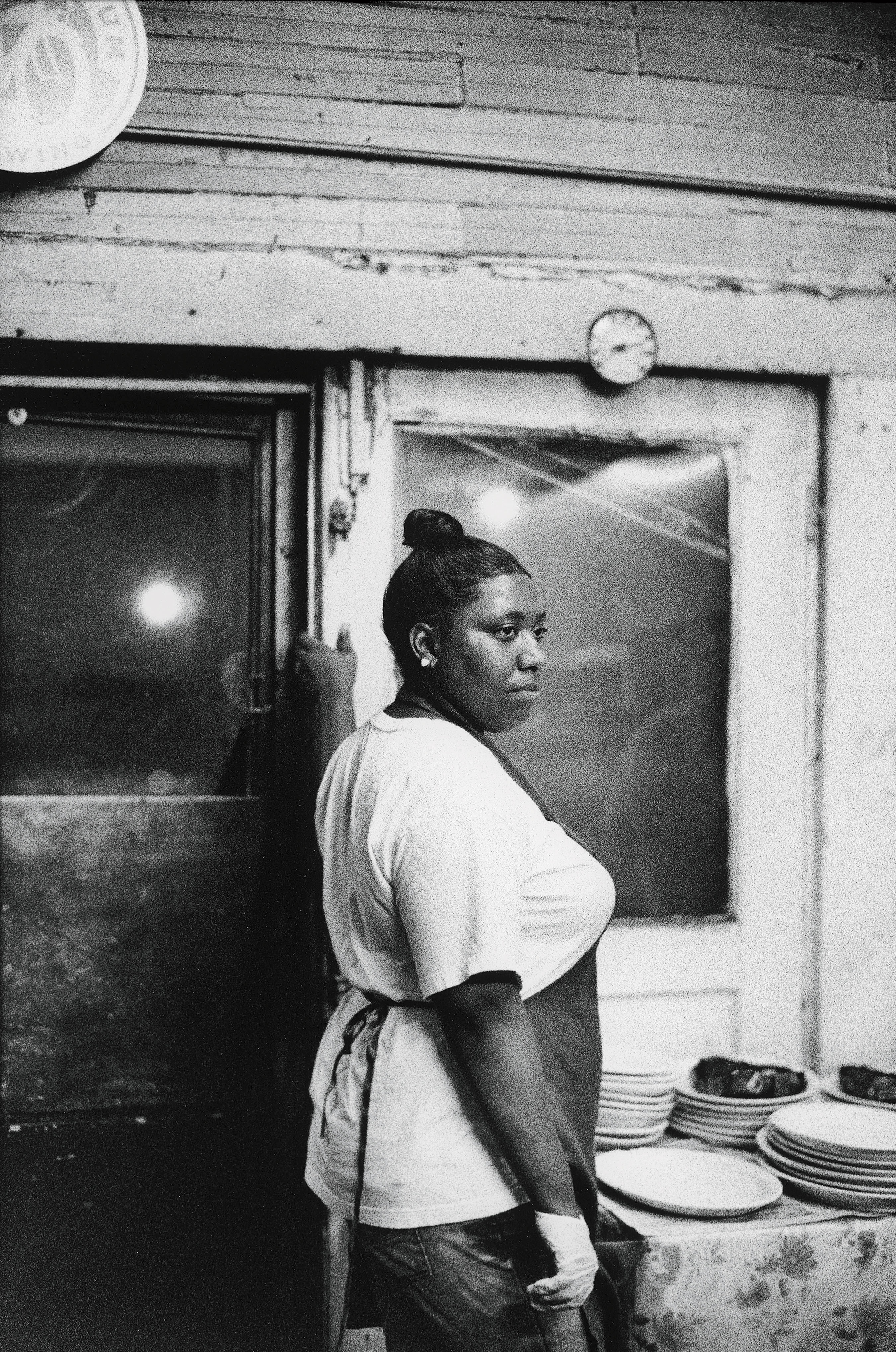 Jessica took her first photos inside the legendary Doe’s Eat Place on her maiden night in Greenville, and she’s been back so many times since that she more than qualifies as a regular. She’s also much loved by the tight-knit staff, including “Aunt” Florence, the still-spry ninety-one-year-old sister-in-law of Doe Signa, Sr., who opened the place in 1941 as a honky-tonk and tamale joint catering to the African American community. When Florence, who has been tossing the restaurant’s iceberg lettuce salad for more than seventy years, gets wind of Jessica’s impending arrival, she brings roses from her garden to our table. Though Jessica sometimes describes herself as a vegetarian, she never fails to succumb to the allure of the enormous steaks, cooked on the broiler just inside the front door, or of the hot tamales for which the restaurant is equally famous. This photo is of Arlicia Ross, a hot tamale roller and cook who is often in charge of the french fries, hand cut and dropped into the ancient black skillets that also produce the world’s best fried shrimp. This image was captured at Greenville’s Walnut Street Blues Bar after an already raucous evening at Doe’s (the restaurant sells no wine or whiskey, which means you can bring your own and plenty of it). The bar, which showcases live acts every weekend, is located at 128 South Walnut, where the sidewalk is embedded with stone markers emblazoned with the faces of the many blues musicians associated with my hometown. Among them are David “Honeyboy” Edwards and Abie “Boogaloo” Ames, a brilliant pianist and mentor to Eden Brent, now an internationally known blues star in her own right. On especially lucky nights, Eden can be found performing in the club with her husband, the bassist and trombonist Bob Dowell. Since Highway 61 is the literal thread running through the images in Jessica’s book, we stopped on the side of the road more than once to photograph the sign. But we both agree that this one, suitably beat up and shot at and part of the memorabilia that cover the walls of the bar, is far more compelling. There’s a line in my good friend Jimmy Phillips’s song “Muddy Water in My Blood” that reads, “Any fool can see I long to be back in the land of cypress tree.” I can think of no better evidence that the Delta is indeed the land of the cypress than these enormous trees that line the entire length of Moon Lake on both sides. Moon Lake is an oxbow lake hugged by Highway 1, which parallels 61 to the west, and is known as an excellent fishing spot for the crappie that hide in the washed-out root systems of the trees. It was also home to one of the South’s most storied Prohibition landmarks, the Moon Lake Casino, which is referenced in one Faulkner novel and all but two of Tennessee Williams’s plays. But Jessica and I came for the cypress, and we had a grand time clamoring over the dramatic roots and knees. The Buzz About Charlotte Roy Blount Jr. steps back in time to his family’s old-school summers on the water