The Art of the Hunt Juli Kirk’s Hounds in a Kennel, oil on canvas, at Cross Gate Gallery in Lexington, Kentucky .

When you gaze at a high-quality work of sporting art, it’s the mood of the piece that grabs you. You can almost hear the flutter of a quail’s wings, smell the Georgia pines, feel the morning’s dew on your fingertips.

The form wasn’t always appreciated by art historians. For much of the last century, they viewed the genre as largely consisting of vanity pieces for elite families of the nineteenth and early twentieth centuries who commissioned artists to paint portraits of their racehorses, gundogs, fox hunts, and fishing exploits. But in recent years, as a variety of sporting art has passed through to the market in private deals and at auction, the best examples have become valued for what they are—“beautiful images of animals and important reflections of culture and traditions,” says Turner Reuter, owner of Middleburg, Virginia’s Red Fox Fine Art. This reappraisal has allowed for such contemporary sporting artists as the watercolor and oil painters Eldridge Hardie (from Texas) and Brett Smith (from Louisiana) to be recognized more and more as true masters.

The South, with its legions of hunters and anglers and rich sporting tradition, has long been fertile ground for collectors of the genre. So it’s no surprise that the region is also home to some of the best sporting-art galleries in the world.

Legendary sporting-art dealer Bubba Wood founded this celebrated Dallas gallery back in 1978. Two years ago, it was purchased by Joe Crafton, who moved the gallery from Inwood Village to a converted bank building in Preston Center. Collectors Covey specializes in Western and wildlife art, including the Rocky Mountain wildlife and landscape paintings of Dan Metz, the angling and gundog oils of Roger Cruwys, and the bronze animal sculptures of Walter Matia. Crafton also sells Caesar Guerini guns—displayed in the former bank vaults. Since its inception, the gallery has been a major benefactor of sporting initiatives, donating millions of dollars to Texas wildlife conservation efforts. collectorscovey.com

As you might expect from its Bluegrass State home, Cross Gate focuses on equine-related art. The gallery’s offerings range from the nineteenth and early twentieth centuries through today, from Samuel Alken, Jr.’s foxhunting scenes to Peter Williams’s Thoroughbred pieces. The owner, Greg Ladd, who founded the gallery in 1974 after graduating from the University of Kentucky, has exhibited some of the bigger contemporary names in the equestrian realm, and is the sole rep for the Polish-born, Kentucky-based painter Andre Pater, known for his mastery of light and movement. Fasig-Tipton, the Thoroughbred racehorse auction company, and the Breeder’s Cup are two of the gallery’s more prominent clients. Since 2013, Ladd and the Keeneland Race Course have organized the annual Sporting Art Auction, where last year a Pater pastel portrait of a Lakota warrior sold for $276,000. crossgategallery.com Thora with Edward “Snapper” Garrison Up, by Henry Stull, sold by Cross Gate.

Perhaps only in Texas would you find a museum-level gallery space housed in a 12,000-square-foot former dry-goods building. Elizabeth Harris started working at InSight in 2010, the year after its founding, and quickly became the gallery’s manager. “The best sporting art is evocative and connects to its viewers through the senses,” she says. “I really loved working with it.” So much so that, two years ago, she and her husband, Stephen, bought the gallery. According to Harris, some of her most popular pieces reflect its location in the Texas Hill Country. Among them: the landscape art of Robert Pummill and the Western art and sculpture of Bruce Greene. insightgallery.com Inside the expansive InSight Gallery.

Gallery owner Turner Reuter literally wrote the book on American sporting art. His 842-page tome, Animal & Sporting Artists in America, published in 2008, is considered the definitive work on the subject. Reuter began dealing in sporting art in 1968. Eight years later, his acquisition of Middleburg’s historic Red Fox Inn provided him with a space—and the name—for his showroom. Though Reuter carries works by major English sporting artists, his main focus is on American paintings and sculpture from the 1850s to 1950s, from such artists as Thomas Hewes Hinckley, who specialized in game-animal scenes, and the equestrian sculptor Herbert Haseltine. His gallery, along with others, has helped make Middleburg—known for its fox hunts and point-to-point horse races—a sporting-art mecca. redfoxfineart.com

Michael Paderewski is an avid outdoorsman who worked as a fly-fishing guide during his college years. That avocation, he says, naturally led him to his vocation: He owns a sporting-art gallery that has locations in South Carolina and Colorado. “Now I have to go hunting and fishing for business reasons,” he says, laughing. Paderewski has been in the sporting-art game for twenty-three years, and he caters mostly to the field and stream enthusiast. He sells works to high-end quail-hunting plantations in the South and exclusive salmon lodges in Canada, and has placed pieces in the National Museum of Wildlife Art in Jackson Hole, Wyoming. While he specializes in investment-grade works of late-nineteenth-century and early-twentieth-century masters, including the sporting and landscape artist Ogden Pleissner and the waterfowl and seascape painter Frank Benson, Paderewski also has a robust collection of such living greats as John Swan, who is known for his depictions of Atlantic salmon fishing and scenes of life on the water in the Bahamas, where he spends part of each winter. sportsmansgallery.com 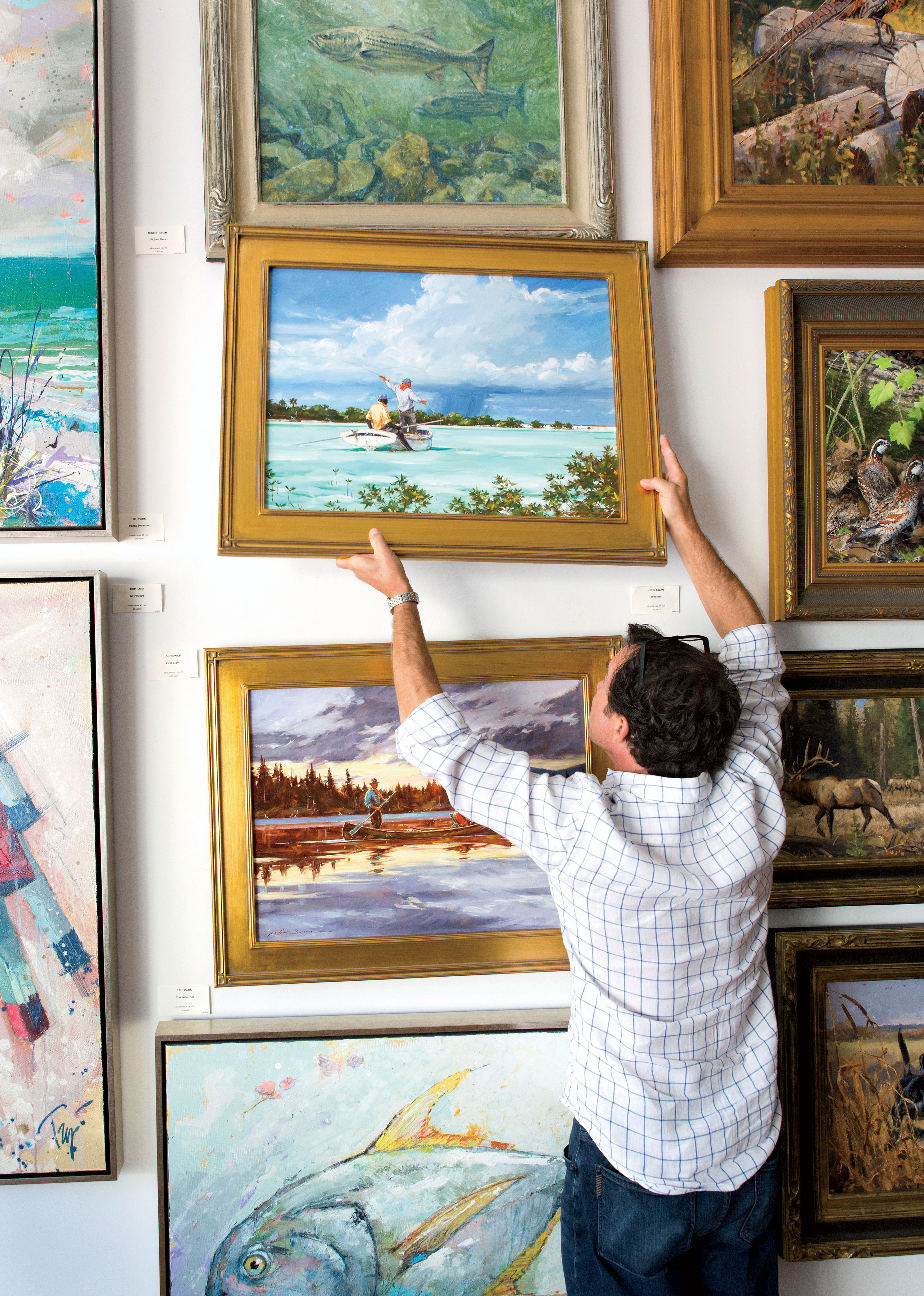 Michael Paderewski hangs a painting by John Swan at his Sportsman’s Gallery in Charleston.

Stephen O’Brien dedicates his gallery to the work of American artists, including the hunting and fishing master Aiden Lassell Ripley, the dog artists Edmund Osthaus and Percival Leonard Rosseau, and the big-game painter Carl Rungius. But O’Brien, based on the seabird-rich coast of Massachusetts, is best known as one of the finest antique shorebird and waterfowl decoy dealers in the country. In 2007, he sold two decoys made by the Massachusetts carver Elmer Crowell for the world-record price of $1.13 million apiece—part of a group of thirty-one decoys that sold for $7.5 million. He also stocks the work of contemporary carvers such as the McNair family of Virginia (Mark and his sons, Ian and Colin). Like the waterfowl depicted in his gallery, O’Brien flies south each winter, holding an annual sales event in Charleston, South Carolina, each February through his auction arm, Copley Fine Art Auctions. americansportingart.com