This icebox dessert is a busy host’s best friend Among my least favorite characters in the Southern kitchen is the cagey cook who refuses to offer up a recipe. It’s a coy move that borders on selfish. Still, people sometimes have deep personal reasons that involve layers of family intrigue, grudges, and hurts that are best left unknown. Fortunately, just such a conundrum led Matt and Ted Lee, cookbook authors and brothers who grew up in Charleston, South Carolina, to create a modern riff on a long-revered icebox dessert.

Simple and engaging whether scooped into bowls or served in slices, icebox desserts are the lazy housewife’s alternative to ice cream. You get the tender texture and creamy satisfaction without all the churning. And they have fanciful names, such as the Ravenel Twins’ Delectable, published in a Junior League of Charleston cookbook.

The Lee brothers’ Strawberry Delight came about after Matt Lee visited a plantation to investigate the dying art of the grand Charleston midday meal. He tried to pry the dessert recipe from the lady of the house and from the family chef. Both said no. Wise enough to leave it at that, the brothers went to work reverse engineering the icebox standard.

In this version, the base is a rich marriage of cream and buttermilk into which a happy cobble of cookies, pecans, and tiny marshmallows is stirred. A ribbon of fresh strawberry syrup adds character, color, and sweetness. The recipe is simple to put together but requires some tending to keep the parts evenly distributed and to ensure a creamy texture as the dish sets up. At regular intervals, you open the freezer and stir the mixture, which freezes in a loaf pan. Take liberties with the ingredients if you like, but not the technique. “Do set a timer,” Matt says. “That’s really the only reason to get specific.”

And do consider serving the simple dessert on a tray adorned with greenery and other frilly trims. After all, in Charleston it’s all about the ceremony. 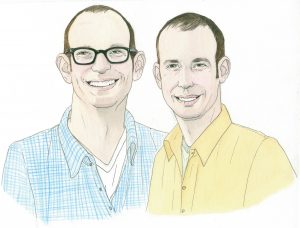 Latest book: The Lee Bros. Charleston Kitchen
Hometown: Charleston, SC
Favorite breakfast: Strong coffee heavily laced with sugar and cream.
How to tell them apart in the kitchen: Ted will always work from a recipe. Matt likes improvisation. “I prefer to work with what I’ve got,” Matt says. “A script rattles me.”
How to tell them apart after a dinner party: Matt will leave all the dishes until the morning, riding the buzz of a successful meal on into bedtime. Ted is a messier cook, but he cleans the kitchen enthusiastically when the party is over. “I want it to look the way I want it to look,” Ted says. “Matt hates it when I say this, but the kitchen is as personal a place as the bedroom.”