American settlers were making applejack, an apple brandy, well over a hundred years before the American Revolution. George Washington was known to distill the wine he made from orchard fruits at Mount Vernon into a more refined and potent brandy. Even John Chapman (aka Johnny Appleseed) had an inadvertent hand in the rise of apple spirits in America. Planting thousands of apple trees from seed on the new frontier was his entrepreneurial way of improving parcels of land so that he could turn around and sell them to settlers for a profit. The bitter fruit of his seed-grown trees, unlike the fruit of grafted ones, wasn’t good eating, so it typically got mashed for booze instead.

Like fat, alcohol is a carrier of flavor, and using hard cider or apple brandy in the braising liquid for pork shoulder adds an intensity you simply can’t get from cooking the meat with fruit alone. I’ve been making iterations of this recipe for years. The method comes from the brilliant Atlanta biochemist and cookbook author Shirley Corriher. The pork enters a blasting hot oven that gets reduced to a super low temp as soon as the oven door closes. Don’t even think about opening the door to take a peek or you’ll lose the perfect climate you’ve just created to transform a tough cut into meltingly tender deliciousness.

Whether you shred it to pile high on a bun or serve it with grits and greens, don’t forget to douse the meat with an ample dose of the braising liquid before serving.

See other recipes in our Cooking from the Bar Cart series. 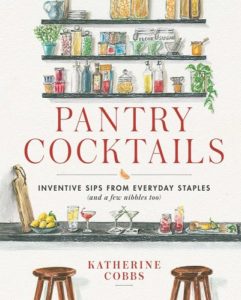 Katherine Cobbs is a cookbook author and editor. Her most recent books are Pantry Cocktails (2021) and Tequila & Tacos (2020), published by Simon & Schuster. She also developed recipes for Garden & Gun’s The Southerner’s Cookbook – Recipes, Wisdom, and Stories.