With a rich history of craftsmanship, this North Carolina city is alive with artistry and adventure 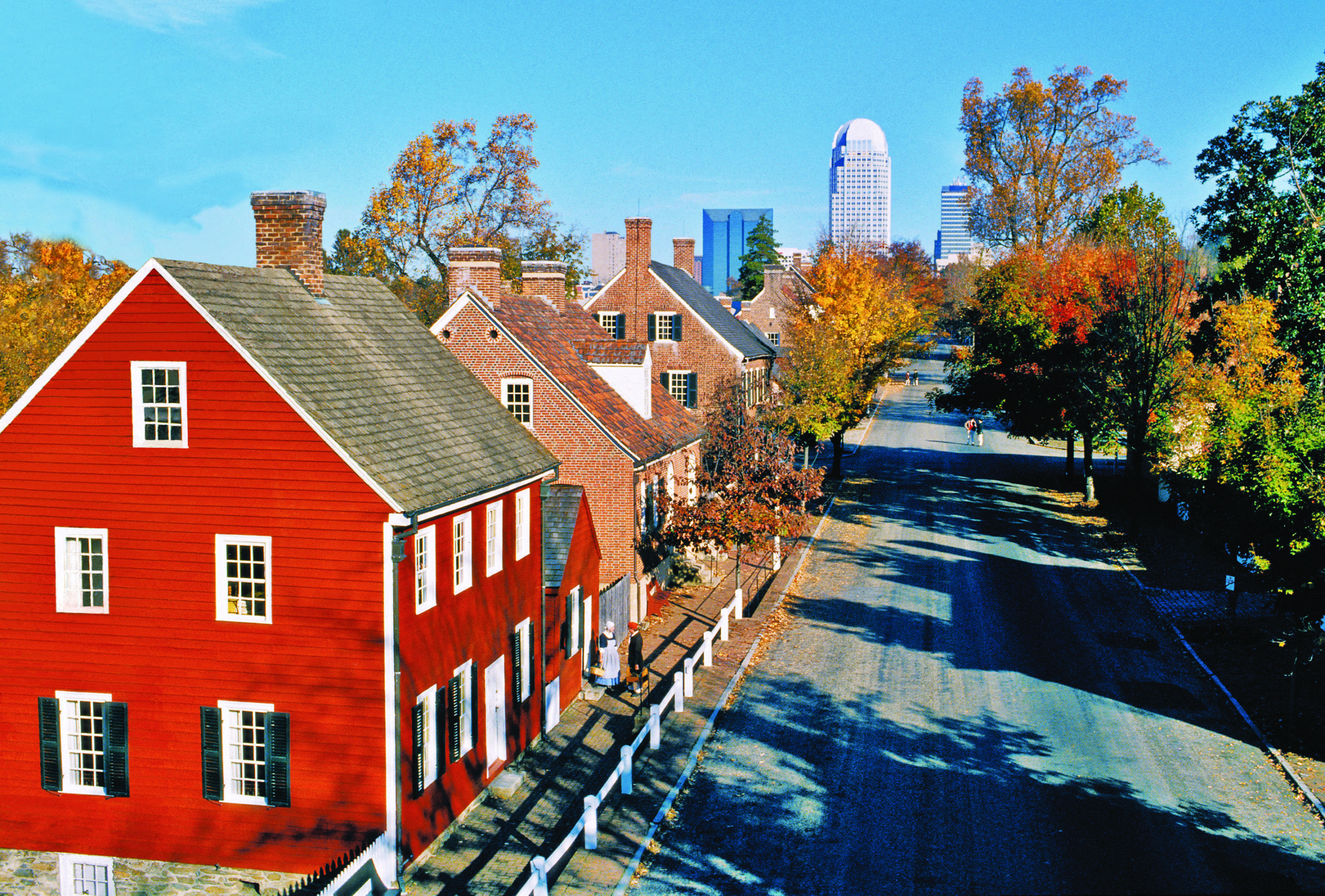 The skyline from Old Salem.

When you enter the grounds of Winston-Salem, North Carolina’s Old Salem Museums & Gardens, it’s easy to feel transported; from the authentic colonial architecture to the period-dressed men and women practicing traditional Moravian crafts, the site is as close to a time-travel destination as it gets in the modern South. Salem was settled in 1766, and today, this living history attraction immerses visitors in the lives of the town’s early settlers, with a special focus on the craftsmanship that developed there. Throughout Old Salem, blacksmiths, cobblers, and carpenters produce wares while others cook over open hearths or bake bread in historic dome ovens. A passion for craft of all kinds is abundantly clear, but this is just the beginning. A demo at Old Salem Museums and Gardens.

Beyond the perimeter of Old Salem, Winston-Salem has continued its rich makers’ tradition; today, the Piedmont Triad city is known as a growing hub of creativity and innovation. In 1949, it established America’s first arts council to support a number of local programs. This widespread appreciation for creative pursuits has fostered a place for creators and innovators to thrive, no matter their craft. At the Sawtooth School for Visual Art, for example, an old textile mill now houses nine studios where students can master mediums such as ceramics, painting, glassblowing, photography, and printmaking. Ten minutes from the city center, the storied Reynolda House, the circa-1917 home of tobacco tycoon R. J. Reynolds and his wife Katharine, contains its own Museum of American Art, with traveling exhibitions and a permanent collection of fine art, estate archives, and historic decorative pieces. In the estate’s adjacent village, hands-on artist studios are scattered among stylish boutiques and restaurants. Throughout Winston-Salem, culinary artistry also abounds. The city’s downtown area is home to more than 120 restaurants, bars, and breweries. Spring House Restaurant, Kitchen & Bar is among the local eateries blending old-school roots with creative new takes. Housed in a renovated 1920s mansion, the restaurant feels reminiscent of the Roaring Twenties while specializing in seasonal, locally sourced cuisine. Located in the historic 1929 R.J. Reynolds Tobacco headquarters building (an inspiration for the Empire State Building in New York City) is the Kimpton Cardinal Hotel. The Cardinal boasts the bustling Katharine Brasserie & Bar, serving traditional French cuisine with subtle winks at Carolina tradition. For something decidedly Southern, venture into the Arts District for the famous weekend brunch at Sweet Potatoes, revered by locals as a near-religious experience.

The city is also the birthplace of North Carolina craft beer, dating back to the state’s first known microbrewery operated by the Moravian settlers in the late 1700s. To sample the local brews, embark on a self-guided beer crawl through the eight downtown breweries located within a walkable one-and-a-half-mile radius. When it’s time to turn in for the night, settle in to one of Winston-Salem’s historic hotels for an inviting stay that’s anything but ordinary. Some of the city’s most popular bookings are the Kimpton Cardinal Hotel and the Hotel Indigo, both constructed in the art deco style of the late 1920s. Near Old Salem, a circa-1837 cotton mill is now the charming Historic Brookstown Inn, while just beyond the city center, the Graylyn Estate offers sleek, modern accommodations in a historic residence built in 1932, one of the finest remaining examples of Norman Revival–style architecture. With this strong a heritage of ingenuity and expression, it’s no wonder Winston-Salem has become a Southern hot spot for those in search of something new. The creative spark is contagious; be it a weekend escape or a longer stay, visitors are sure to come away more inspired than before.

Plan your getaway at visitwinstonsalem.com A Weekend in Bluffton, S.C.

Plan your escape to this enchanting Lowcountry enclave During the cooler months, the newly restored resort in Cashiers, North Carolina, transforms into the perfect couples’ getaway