How to Pour the Perfect Bloody Mary When I became old enough to pay attention to my folks’ weekend morning rituals, I couldn’t help but notice that once the coffee was dry—like clockwork—it was time for a “Bloody.” In my younger days, my dad, Scott, kept the ingredients in our pantry, close at hand. As my brothers and I grew older and departed for college, my parents quickly began taking their show on the road. They’d never travel without their Bloody Mary “kit,” which began simply as an extra tote bag stuffed with ingredients but grew much more sophisticated with time.

As my dad tells it, my mother’s grandfather Jack Rudy always traveled with a drink kit that included Wild Turkey 101, a shot glass, a mixing spoon, and four glasses, neatly stowed in a hard-sided case like a small piece of luggage. After they heard the story, some dear friends gave my parents a similar kit: a small soft-sided cooler with individual compartments, which my dad has used for over a decade to tote his “fixin’s.” And like any proper Kentuckian, he also totes a bottle of bourbon, tucked into the corner.

Even though—sacrilege—I’m not a big fan of Bloody Marys myself, over the years I’ve still tried to perfect them at my restaurants. But nothing seems to live up to my father’s recipe.

Learn more Southern secrets in our Manual of Southern Know-How. 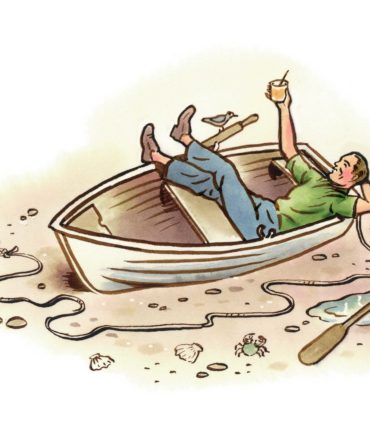 How to Bag a Bourbon Boat Drink How to Thump a Watermelon