A Louisiana family wanted an entertaining space but needed a stable. So they built both in one and wound up with the ultimate party spot 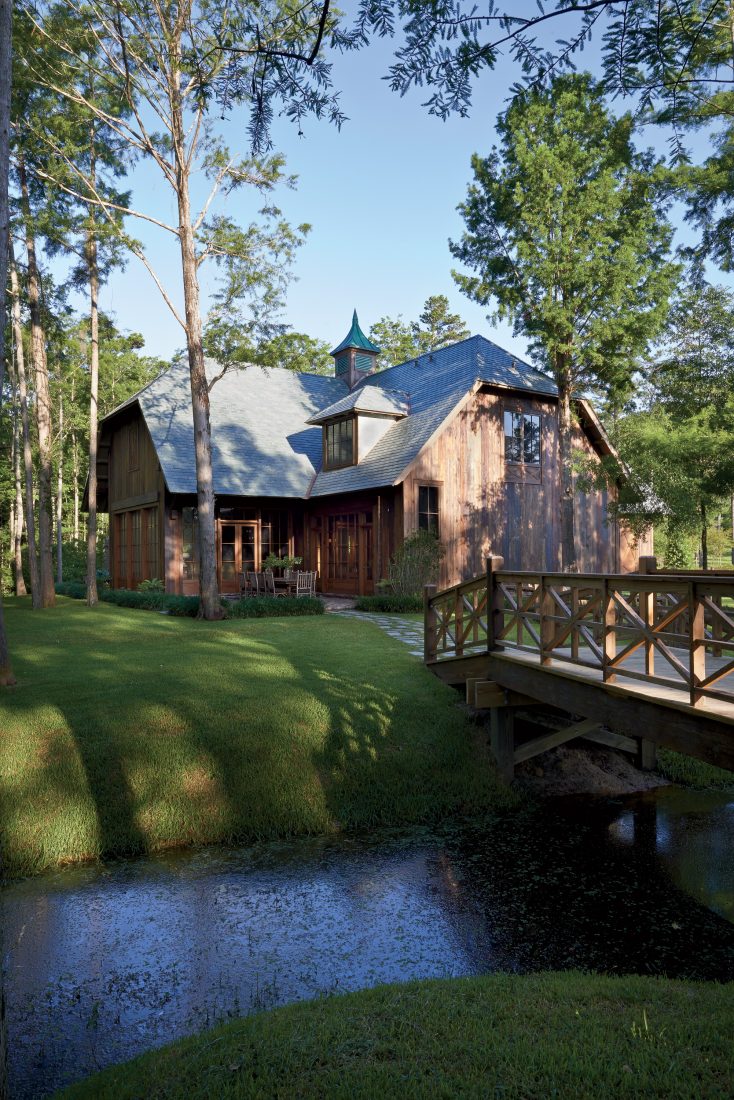 A glimpse of the barn.

The idea for the barn started—as is not uncommon for barns—with a horse. Jennifer and Fred Heebe’s ten-year-old daughter Anna loves animals, which had caused an explosion in their country compound’s non-human population. The couple needed places for some of the new residents to live, chief among them a stable for one of Anna’s horses. As it’s not hard to see when you pull up along the narrow gravel road, past pine-dotted fields and pastures, they ended up with something a bit more ambitious. Talisheek, as the Heebes call their property, is just over an hour outside of New Orleans, near the Louisiana/Mississippi border and adjacent to the Bogue Chitto National Wildlife Refuge. Fred’s family has owned it since the 1940s. He remembers when he was a kid, and most of the land was wild andswamp  overgrown: He’d come out and help his stepfather with projects, fish, and go water-skiing barefoot. Today, he, his cousin, his stepfather, his stepbrother, and the property’s caretaker all have houses here.

The architects Eric Grieshaber and George Hopkins had already designed the Heebes’ main house a little way up the road, and they had been talking with Fred and Jennifer about adding a pavilion where the entire family could gather. When the idea of building a stable came up, they decided to get creative with a structure that could meet all those needs.

The barn ended up becoming many things, but it’s still a true barn. The elegant main entrance goes right past three stalls containing a sampling of Anna’s menagerie: two miniature Sicilian donkeys, a couple of Angora rabbits, two goats, and a longhorn calf. (Anna’s horse, as it turns out, preferred to stay in its old home a short walk away.) Just past the stalls, two heart-pine doors pull open to reveal a majestic main hall, with a kitchen, a bar, and a dining room—all with soaring timber ceilings held up by massive reclaimed beams above and salvaged brick and wood floors below. Upstairs, two guest rooms sleep one family each, with window beds for kids. “This was not a place for color or trend,” says the interior designer Melissa Rufty. “It called for a ‘less is more’ approach.” She chose touches that speak to the barn’s essential simplicity: vintage hog pans and antique copper oven pans in the kitchen, faded milk jug tea caddies in the bar. Even the electrical sockets are covered in salvaged wood a local craftsman repurposed. “A good friend who is a professional actor once told me, ‘You don’t have to sing every note you know,’” Rufty says. “That line stayed with me, especially on this project. It’s about letting the structure tell its story and letting the symphony of crickets, frogs, and alligators do its thing.”

The blurred line between interior and exterior continues in the dining room, which feels as if it’s sitting outside. The window-wrapped room overlooks the bayou and what the Heebes call their swamp walk: a snaking 720-foot wooden path through the cypress trees that leads from the barn to the main house. Because the family spends their time in the fall fishing out of pirogues and airboats for bass, pike, and redfish, it’s no surprise that the interior element they love the most is in the kitchen: a wood-burning grill, modeled after the one at Donald Link’s Pêche Seafood Grill in New Orleans.

The wood-burning fish grill in the heart of the barn.

“Fish cooked the same day—it’s like nothing you’ve ever had,” Fred says. “And then to cook it right there—it’s not only great food, but it’s a place where everyone can stand around with a glass of wine and watch that fire. It’s perfect.”

Talisheek may be tamed, but only to the degree that anything in South Louisiana can be. Out here along the West Pearl River, any man-made structure can’t help but play second fiddle to nature. The Heebes are far from the only Louisiana family to keep a retreat from the city, even if theirs comes with more amenities than most. But camps, as they’re called, are really all about the basics: family, and the swamp. Stories about Talisheek inevitably revolve around an animal of some kind, whether it’s the occasional snake, a colossal alligator, or an aggressive goose.

“It’s the heart,” Jennifer says of the barn. “That’s the reason we wanted this—to have a central meeting place where we could all eat together and watch the sun set. We’re in the city all week, but to have our kids and family in fresh air on the weekends, that’s what we treasure about Talisheek. There’s no place like it.”