Duck Head devotees, rejoice—the historic brand is ready to reclaim its place in today’s closets with a new collection of twelve inspired staples As any Mallard loyalist who still remembers marking time by the life cycle of a pair of 1980s or 1990s chinos will attest, Duck Head is much more than a brand. It is a touchstone that represents tradition and dependability—and now, thanks to the revived label’s triumphant and long-awaited return to form, it is a source of future inspiration, as well.

“The more I talked with people, the more stories and memories emerged, and I realized how strong the legacy still is,” says Wesley Howard, the president of Duck Head’s new parent company, Atlanta-based Lanier Apparel, a division of Oxford Industries. Howard fondly remembers discovering chinos as an undergraduate. “Rarely do you come across a brand that evokes that kind of emotional connection,” he says. “That’s one thing that we don’t have to manufacture.” It’s hard to recall a time when chinos were not the cornerstone of American wardrobes. But it wasn’t until 1978, when Duck Head took a chance on sixty thousand surplus yards of the khaki-colored material, that the overlooked fabric took on a modern and universally flattering silhouette, and the uniform of a generation was born. Polos, oxford shirts, and other mallard-stamped staples soon followed, and the uniform became a bona fide lifestyle.

The history of Duck Head has always been defined by moments of near-prescient ingenuity, a legacy that flows directly from the company’s founders, George and Joe O’Bryan. In 1865, the Nashville-based brothers—who were both Civil War veterans and avid outdoorsmen—transformed leftover canvas army tents into rugged, long-wearing pants, and redefined the everyday aesthetic of the era. A century later, their inspiration lifted another surplus material out of obscurity and turned the page on American style once again. Today Duck Head continues that tradition of crafting visionary designs with transformative impact through a collection of twelve modern interpretations of classic staples: piqué polos with a hint of spandex for stretch; long-sleeved crewnecks with a gone-era “whistle patch” (the little v of fabric at the neck) that recall early-twentieth-century workwear, and traditional indigo button-down denim shirts.

“Ours is a ‘best of’ approach,” Howard says. “We are starting with the foundational items, and reinterpreting every piece to make it as relevant and perfect today as it has always been.”

And this is just the beginning. The essentials collection will anchor the new Duck Head wardrobe, but the brand will soon expand into additional categories. “We are always adapting our products to fit the changing needs and tastes of our customers,” Howard says. “We’re rooted in the past, yes, but we are not stuck in it.” A common thread, indeed.

The options for mixing and matching are limitless, thanks to the brand’s deft blend of classic shapes and modern fits and fabrics. Shop duckhead.com now for both a classic daily aesthetic and a more elemental outdoor style for the man headed to the field or the dock. Ideal finds for the gardener, griller, boater, and more This trio of designers has the fashion world on notice 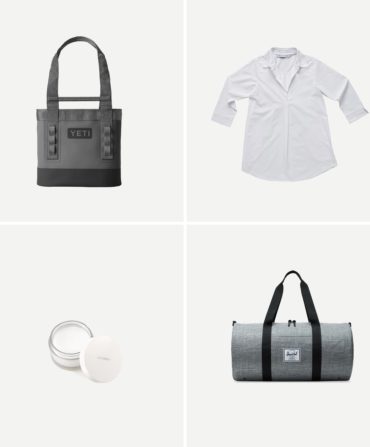 Favorite finds for the plane, train, or automobile