Everybody’s heard tales of monster whiskerfish lurking in the deep, dark waters of Southern lakes and rivers. We take a dive in search of the truth 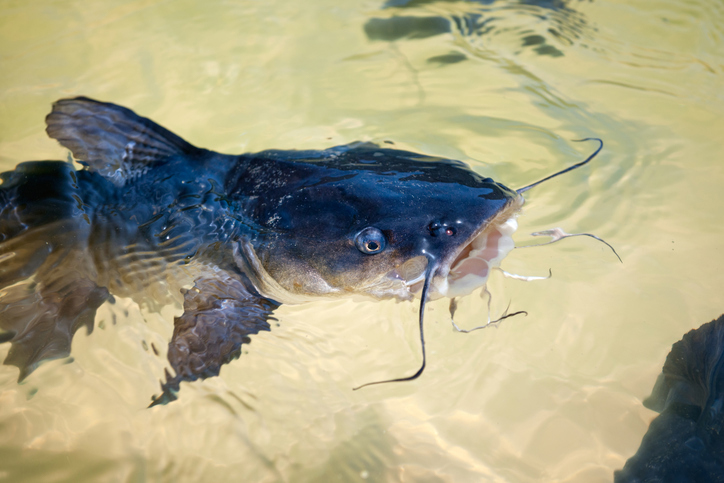 The largest catfish have never been caught. Not even close. The true giants—the ones that grow as big as Volkswagen Beetles and can swallow a Jack Russell whole or even pull under a child—live at the bottom of reservoirs and dams, far too deep, and far too wise, to ever be hooked. You can try to land one, sure. Go knock yourself out. But just know that you’re wasting your time. Every now and then, however, a diver, tasked with making an underwater repair, catches sight of one of the beasts, lurking in the darkness, then promptly hauls ass back to the surface to avoid becoming fish food.

That’s what scores of Southerners have long believed, anyway. I hazard that any kid with a fishing pole and bobber south of the Mason–Dixon Line has heard tell of these goliath, uncatchable whisker fish, one of the closest things the South has to the Loch Ness Monster. But how much, if any, of the big-fish talk is true?

Billy Mitchell is a diver with River Services Company in Greenville, Mississippi. He has spent the past 15 years salvaging submerged barges and working on dams and waterway construction sites, from the Gulf of Mexico all the way up to Saint Paul, Minnesota. He’s no doubt familiar with the legend. “When someone sees us with one of our diving shirts on,” he says, “the first question we hear is, ‘Have you ever seen a giant catfish the size of a Volkswagen Beetle?’ ” He estimates that he gets asked upwards of thirty times a year about the fish, and he’s convinced that people, for one reason or another, enjoy believing—perhaps subconsciously—that monster catfish lurk somewhere at the bottom of lakes and rivers.

A fascination with, and fear of, big cats, as Mitchell regularly witnesses, is nothing new, nor is it exclusive to the United States. From about 1600 to 1870, the Japanese, for example, believed in an orca-size mythical whiskered fish named Namazu, who controlled flooding and rainfall. In 1855, when a 7.0-magnitude earthquake rocked the city that would later become Tokyo, claiming 8,000 lives, locals believed that Namazu wrought the devastation, a punishment for their wrongdoing. Stateside, tales of giant cats date back to at least the end of the 19th century. In Mark Twain’s 1883 memoir, Life on the Mississippi, he writes of having seen six-foot, 250-pound catfish in the river, which, if true, would dwarf the standing North American record—a 143-pound blue cat, caught in Kerr Lake, on the Virginia–North Carolina border, in 2011.

Rumors of the giant cats grew more colorful over time: In May 1902, Kentucky’s The Hickman Courier published a front-page story about a farmer’s near-death fight with a monster catfish that had become stuck in the shallows of a creek. For reasons not made entirely clear, the farmer thought it prudent to hurl himself atop the floundering catfish—which then proceeded to impale him with one of its spiked fins and pull him into deeper water, where he nearly drowned. Moreover, a widely passed-around photo of a catfish in the neighborhood of 800 pounds, purportedly taken in 1914, in Hardin County, Tennessee, further propagated the belief in huge cats. (According to Snopes, the photo later proved a fake.)

Over the following years, stories of monster cats continued to surface in small-town newspapers every so often. But the myth took on new life in the early 1930s, when the Tennessee Valley Authority began building hydroelectric dams throughout the Southeast, slackening and deepening its waterways, and making the existence of the gigantic fish more plausible in the minds of many—and leading to even more far-fetched stories. In the 1970s, a rumor persisted around Caseyville, Kentucky, that a fisherman found a human baby in the stomach of a large flathead cat, according to American Folklore: An Encyclopedia. Within a decade of that supposed incident, giant cats had become bonafide tabloid fodder. In 1985, the Weekly World News—a weekly rag of mostly fabricated stories and proto fake news—ran a sensational headline: “Catfish Attacks a Water-Skier!” The story details how an 11-year-old boy endured a vicious attack, with bite marks up to his knee to prove it.

As much as I want to believe these stories, or at least parts of them, I found in my research no evidence to suggest that they’re anything but fabrications. And there’s no contingency of scientists out there looking to prove the existence of monster cats, either. Like any good tall tale, these stories contain a shade of truth, making them seem at least vaguely plausible, a possible explanation for their longevity and wide distribution. To wit, there are indeed monster catfish—the Wels—that can grow as large as 300 pounds. But they’re native to Eastern Europe, not North America.

Mitchell, based on the untold number of hours he has spent underwater, said that he’d struggle to believe any report of a catfish of the size of a Wels in the U.S., much less one weighing as much as a car. He often dives 125 feet deep and has spotted 60- to 70-pound catfish; on at least one occasion, he pulled a 90-pounder out of a submerged barge. But he has encountered no fish even comparable to a Volkswagen. He considers giant catfish purely a myth. “It’s one of those deals where somebody said they saw something years and years ago,” he says. “And somehow some people still believe it.”

Sometimes, though, he’ll get tired of people asking him over and over about the gargantuan cats, so he’ll have a little fun and tell them, yes, he has seen vehicle-size cats, way down in the depths. In this way, he’s helping the giant catfish live on, not in the water but in the imagination, where the creatures truly thrive and multiply. “It’s amazing what people will believe,” he says. Drink enough, and you’ll see stars, for sure. But can homemade hooch cause permanent vision damage? We consulted the experts to find out