We’re down to three and one-eighths dogs, plus the tailless cat. So that’s three and one-eighths dogs, and seven-eighths of a cat. The one-eighth dog, Max, is a Chihuahua that I inherited. He’s fifteen years old, and will live to be about forty-nine, I’m thinking. The cat’s named Nub, for obvious reason. The real dogs—Sally, Lily, and Mabel—are somewhere, we think, between four and eight years old. This is not a math quiz, I promise. I’m not going to make you start thinking about a Trailways bus traveling thirty miles an hour from Point A in one direction, and a coyote traveling toward it from Point B at seventy miles an hour.

It’s all about Mabel. Everything’s about Mabel. Mabel wants it that way. Mabel considers nothing else. She must sleep with us. She must go wherever we go. If we watch a movie, she must spend time explaining how said movie’s not as good as My Dog Skip, or Old Yeller.

Mabel got thrown out by somebody, probably with her first litter, back in 2013. She circled our land in Dacusville, South Carolina, for three days, barking at me whenever I came out and tried to coax her my way. Her teats almost dragged on the ground. I took out food. I took out water. Nub the Cat had just shown up a couple of months earlier, and he looked at me as if to say, “Yeah, I remember that dog from the woods—she’s a handful. She’s needy. She’s a trainload of neuroses.”

Mabel’s a brindle. She weighs thirty pounds, and my wife, Glenda, got online and Googled “brindle, thirty pounds, big head, lolling tongue, yapping, untrustworthy” to find a photo of something that the American Kennel Club now recognizes as the Treeing Tennessee Brindle.

“I knew it!” Glenda said. “She’s some kind of purebred dog that someone couldn’t manage.”

Here’s an aside: When our beautiful dog Lily showed up in the front yard one morning at 5:00 a.m., she suffered from a variety of ailments. She was malnourished, she had cracked paw pads, and she didn’t have toenails. She had canine scabies. Lily had been on the road for a while, obviously. When we got her stabilized, I took her to the vet, and beforehand Glenda, who’d evidently been online and developed a theory, said, “Ask the vet what kind of dog she thinks Lily might be.”

I came home and said, “You were right! Lily’s a Welsh hound.”

“I knew it!” Glenda blurted out. Then she hit me pretty hard in the arm when I told her the truth.

Anyway, back to Mabel. She circled. I went out in the woods looking for her litter but found nothing. I assumed that coyotes, foxes, rabid raccoons, or some questionable people down the road happened upon the litter at some point earlier. I took food out—a mix of kibble and the miracle cure for all sick dogs, Vienna sausages—and crouched beneath a flowering tree. Mabel came closer—like within ten yards—but hunched low, slunk, kept her eyes on me, and yipped.

And at that point Mabel—still unnamed by us—shot straight forward toward me. She didn’t go for the food. I’m prone to exaggerate, I know, but I have a witness. This dog ran up to me as I still crouched, and pressed the front of her belly up against me, her paws up on my shoulders. She trembled something awful. I stroked her backbone. She finally released herself and devoured the still-bowled food at my feet.

Another aside: Armour Vienna Sausage, you can send royalty checks my way through this magazine.

At the time we still had a number of cast-off dogs: Dooley (RIP, died at age seventeen-plus), Nick, Maggie, Charlie, plus the aforementioned. All of this occurred about three months before Glenda and I moved to Spartanburg, South Carolina, from nearby Pickens County. I named Mabel; she seemed to come to that name in an inordinately quick time, as if maybe I’d guessed her original name, and I took her to the vet to get her some shots/get her spayed/have the vet check for a chip. Glenda said, “Hey, ask the vet if she’s a Treeing Tennessee Brindle.”

Mabel shook, quivered, and grunted—if there’s a Grunting Tennessee Brindle, it’s this dog—and I said, “What kind of dog is this?”

I said, “Not a Treeing Tennessee Brindle?”

The vet didn’t smile. She looked me straight in the face. She said, “What?”

We moved to a couple of acres of fenced-in yard. My old friends make fun of me. It’s a compound. Come try to find me—it’s impossible. There are twelve-foot-high tea olives surrounding the property, which hide the chain-link fence. There are thirteen magnolias. There’s elaeagnus, which I just had to look up to see the correct spelling. That stuff smells good, especially while drinking good bourbon in its midst, whittling canes, reading Schopenhauer, staring at jet contrails overhead, thinking about the Bible, and/or wondering if there’s any hope left in the world. There’s false holly, and pines, and tulip poplars, and azaleas. Camellias, Japanese maples, a big spruce that doesn’t belong here.

Still not a math test, I promise. All of this is to say, it’s a damn perfect habitat for cardinals, wrens, chickadees, hummingbirds, goldfinches, bluebirds, one red-tailed hawk, chipmunks, anoles, opossums, skinks, rat snakes, one copperhead, one king snake, one rough green snake, and squirrels.

We have ten Yankee feeders scattered around, backyard and front yard. I fill them up about bi-daily with sunflower seeds. Oh to see male cardinals come down and hang out, or the doves down below. Some people think “bi-daily” means every other day. I mean “bi-freaking-daily.”

Mabel might not be the smartest dog we’ve ever had. If we say, “Go for a ride?” or “You want a dog biscuit?” or “You want to go outside?” in that high-pitched voice that dog owners use, Sally, Lily, and one-eighth Max perk up. So does the cat. But not Mabel. She remains rolled over—I should mention, too, that she has eight nipples on one side of her belly, but only six on the other.

There’s an emeritus professor where I teach at Wofford College named Dr. John Pilley who has a dog named Chaser who supposedly knows well over a thousand words. That dog has been on 60 Minutes, among other shows. He was on a thing called Cute Animals starring Neil deGrasse Tyson, the astrophysicist.

We don’t mention Chaser’s name around Mabel, seeing as she’s stuck on one word and one word only: squirrel.

As I’ve already said, I can look Mabel in the eye and say, “You want a T-bone steak?” and she’ll stare at me as if I’ve rattled off an algebra problem. But if I say, “Squirrel”—with zero inflection—she’ll jump off the couch straight for the door, brindle tail out and straight, as if she derived from a regular AKC-recognized breed. She’ll stare at the doorknob.

When I open the door, she takes off, paws in need of better traction, off the porch, down the pea gravel driveway, tiny pebbles ricocheting off our back car windows. Mabel skitters past the false holly, veering right, toward the first three-set of Yankee feeders where, indeed, squirrels hang upside down even though I’ve placed Slinkys down the posts as Glenda showed me to do after she saw something on the Facebook.

The squirrels ball up on themselves, fall to the ground, then hit the chain-link fence audibly, get through, or over, and hit sweet gum trees full tilt.

I stand on the deck, laugh, laugh-laugh-laugh, and say, “Good dog, Mabel. You saved us! Good, good dog.” 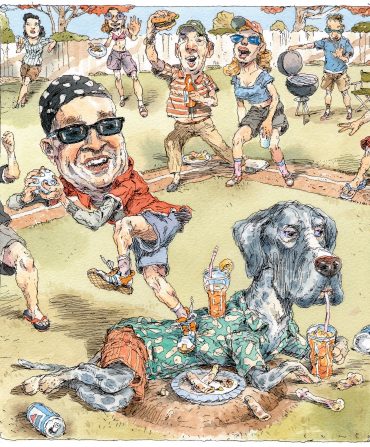 From the kitchen to the baseball diamond, Calpurnia knew her way around a plate A lovable mutt with no patience for life at home