A boat- house on a quiet Lake Rabun cove.

WHY WE LOVE IT: As you approach Lake Rabun, the decades seem to vanish right along with your cell service. A water-skier cuts across the lake’s glassy surface behind a 1935 triple-cockpit Gar Wood. Around the bend, a gleaming 1949 Chris-Craft pulls up to a neighbor’s boathouse for cocktails. Somewhere a charcoal grill fires up, its familiar scent riding the evening breeze. There’s a timelessness to this rural Blue Ridge hideout in North Georgia’s Chattahoochee National Forest—one anchored by the lake’s flotilla of vintage wooden boats.

After the Georgia Power Company impounded the lake, Atlantans began making Rabun their playground in the 1920s, sending boats like these by rail from the city before a team of mules hauled them down to the water. It was too much trouble to move them again, so if a house sold, the boat stayed put. You can see the Rabun navy, one of the country’s largest inland fleets, on parade during the lake’s famed Fourth of July Wooden Boat Regatta. But beyond the boats, an old-school, pre-smartphone sense of community thrives here. At the open-air pavilion on Witham Point, the Lake Rabun Association, founded in 1928, hosts Saturday-night bingo, band parties, and barbecues for members, as well as public events that help raise scholarship funds for local students. Even the surrounding landscape remains relatively unchanged—much of it owned by Georgia Power or protected by the National Park Service. Dirt roads still snake around the lake. The clear water, fed by a network of mountain streams, stays cool even on the sweatiest dog days of summer. Simply put, Lake Rabun is restorative. Or as longtime resident (and unofficial lake historian) Charlie Arp explains, “Atlanta drains your bucket. Rabun fills it back up.”

HOW TO DO IT: Most folks escaping to Lake Rabun come from Atlanta, but Greenville, South Carolina, and Asheville, North Carolina, are both under two hours from its 843 shimmering acres. If you’re lucky enough to have a friend with a house and you score an invite, you’ll want to stock the cooler and pick up a thank-you gift at White Birch Provisions in Clayton—once you reach Rabun, only milk-and-bread basics are readily available. Consider Kate Maddock’s made-from-scratch baked goods, perhaps (the four-layer coconut cake and fudgy oatmeal brownies are favorites), or a casserole and a bottle of wine for supper. Though traditional rental (and Airbnb) opportunities are slim, the twenties-era Lake Rabun Hotel helps make up for the shortage. Built from local locust wood and native stone, the main inn offers thirteen guest rooms and charm to spare. The white-tablecloth restaurant even poached its chef from Atlanta’s acclaimed Bacchanalia. Once you’ve settled in, slip into your swimsuit. The hotel rents both pontoon boats and kayaks. Mornings—just as the sun peeks over the mountains and steam rises off the water—are the best time for a quiet paddle before the skiing, wakeboarding, and tubing commence. Or crank up a pontoon and putter over to the historic Hall’s Boathouse, a marina residents saved from development in the 1980s, for a six-pack, ice, and picnic provisions. Ask to poke your head in the boat shop, where vintage Chris-Crafts, Centurys, Gar Woods, and Hackers get refinished and repaired. The surrounding national forest supplies a wealth of popular hikes, including paths to Angel Falls, Tallulah Falls, and Minnehaha Falls, which spills down sixty feet of stair-stepping rock. Flanked by banks of rhododendron, that much-beloved destination elicits the most “oohs” for your efforts, the gently sloping trail about a half-mile round trip. To replenish the calories you’ve burned, take the boat to Louie’s on the Lake—which feels like a retro summer-camp dining hall sans KP duty— and you’ll be rewarded with a just-greasy-enough slice of pizza and one of the lake’s best sunset views.

LOCALS KNOW: Whether you’re religious or not, Sunday morning Boat Church in Hall’s Cove is worth a wake-up call. The dress code is pajama friendly, and though the thirty-minute floating service is run by Clayton First United Methodist Church, all are welcome. The sound of the choir’s voices echoing off the mountains will beckon you back long after you’ve gone. The Untamed Heart of Lake Jocassee 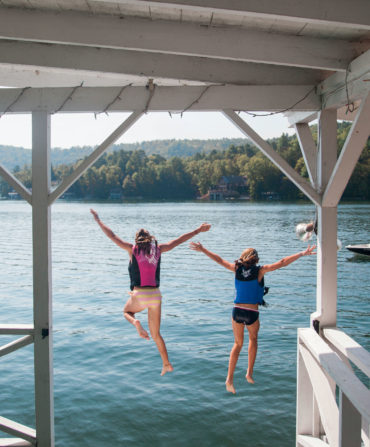