“Water Valley to Oxford is kind of like Brooklyn to New York City, which I realize is a ridiculous comparison because it’s Mississippi,” says Alexe van Beuren, who co-owns B.T.C. Grocery in Water Valley, a little town about eighteen miles south of Oxford. With a population of just over 3,000, Water Valley draws many of Oxford’s artists, intellectuals, and young residents with its cheaper rent and laid-back, small-town atmosphere. This influx has spurred a revitalization, which van Beuren has helped fuel with B.T.C., where she touts fresh, local produce and products while co-owner Dixie Grimes serves classic burgers, fries, and onion rings, along with rotating daily specials that have included Korean bulgogi flank steak and Yucatan-style lime soup. “Once, Dixie did vegan Indian chickpea dumplings that look like $5 million on a plate but are $8.99,” van Beuren says. “It’s food people don’t otherwise have access to in Water Valley.” So, while B.T.C. and the surrounding downtown are thriving—art galleries, a hardware store-turned-hotel, and an old-fashioned drug store line the once-barren Main Street—when it’s time to go out for a meal, van Beuren ventures up to Oxford, where she’s become a regular at these restaurants off of the town’s beaten path.

“Joel Miller is known as the best fine dining chef in the area. Ravine has been open for about ten years in a converted old house, with a really cozy vibe. Every chef says they source locally, but Joel really does. He’s the owner, and he’s in the kitchen every day. Long before people in this area were into doing everything themselves, Joel was. One time, I got a root beer float for dessert and he’d made the root beer himself. Who does that? I’ve been going for ten years and have never had anything even average. It’s classic, excellent food, with a high attention to detail. Even their breadbasket is amazing, with the best butter you’ve ever had.” oxfordravine.com “John and Lauren [Stokes, who own Tarasque] live in Water Valley, too. The restaurant has an Italian influence, and they’re big into produce and local ingredients—like John will forage muscadines on vines on the way into work in the morning. They set up a ten-or-more-course dinner that’s only about $40. It’s so personable. This is my go-to family spot for sure.” tarasque.net Classic spaghetti with a monster meatball.

“This is good country cooking on the outskirts of Oxford. It’s about $7 for lunch, and they have drinks like red Kool-Aid and great sweet tea. They make their own cakes—you can get a slice with your meal, but you have to ask if you want a whole cake to take home. You’ll see everyone from the chancellor of Ole Miss to guys on trucks during their lunch breaks. It’s quirky. You get to engage with everyone in there and say hi to Mama Jo herself, who’s always in the kitchen.”

“Ajax is an Oxford institution with great Southern plate lunches. My favorite is their fried shrimp po’boy. People will stand outside and wait two hours on a football weekend, but it’s totally worth it. Randy Yates is the owner and a super nice guy. It’s just a stand-up place that’s been open for decades.” ajaxdiner.net

“New things open all the time in Oxford and fail to take hold, so there’s something to say about places that have been putting out good food consistently for decades. Bottletree opened in the early nineties with really great pastries and coffee, and they’re still doing that today. They also make their own fresh bread on a daily basis, which is really hard to come by, especially around here.” facebook.com/bottletreebakery 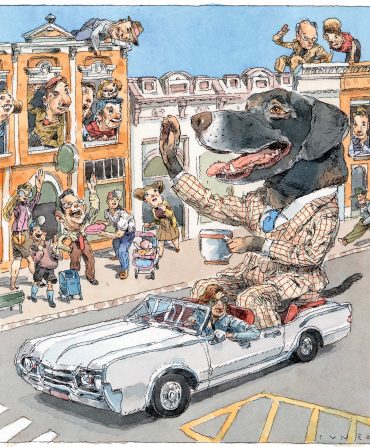 How a bookish Labrador became a college-town hero The Magic of Square Books

A writer’s ode to a storied little Mississippi bookstore