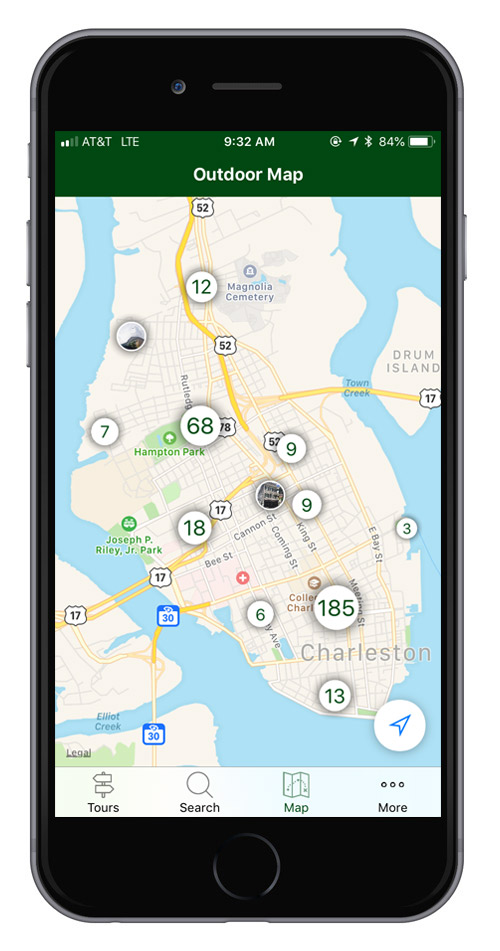 How do you get new people interested in old—sometimes really old—places? It’s a challenge Lauren Northup, director of museums for the Historic Charleston Foundation, faces every day. Although the South Carolina city is one of the nation’s best-preserved, attendance at its historic sites hasn’t kept pace with the boom in tourism. “There are seven million people who visit Charleston each year, and we’re only reaching about 150,000 of them,” Northup says. “So clearly there’s a lot of room for growth.”

One way the HCF hopes to achieve it is with a new free app that anyone—visitor or resident—can download to their mobile device. The interface features an interactive map view of the city, allowing users to walk from site to site on a self-guided tour. “We’re adapting to a new generation,” Northup says. “They’re used to having the world on their phones and self-guiding their own experiences. It’s our job to provide it for them.”

The app includes thirty audio stops and three hundred more sites told through text and photos. In addition, it contains forty-five minute updated audio guides to both of the HCF house museums, Nathaniel-Russell and the Aiken-Rhett Houses. Whether illustrated through writing, photos, or oral histories, each story is told in the slightly irreverent and entertaining tone HCF championed on its popular Instagram account.

Ah yes, a crisp autumnal Saturday on the Battery. The rustle of falling leaves. Cozy sweaters. A high of 85. Wait. Oh right, it’s Charleston — instead of fall we get second spring! #hcfbatteryviews

A post shared by Historic Charleston Foundation (@historiccharlestonfoundation) on Sep 22, 2018 at 6:36am PDT

The app leads users to such notable Holy City destinations as the Battery and Rainbow Row, of course, but it also focuses on lesser-known sites of Charleston’s history, like the Cigar Factory, a nineteenth century manufacturing plant on East Bay Street once used to produce cotton, then cigars, and now home to retail, restaurant, and office space (including G&G’s headquarters).

“We intentionally targeted sites with overlooked stories—African American, working class, women, LGBTQ stories,” Northup says. “Charleston has an incredible Civil Rights history. The strike at the Cigar Factory was the first time the song ‘We Shall Overcome’ was used in the Civil Rights Movement. Septima Clark was called ‘grandmother of the Civil Rights Movement’ by Martin Luther King, Jr.” Like the Cigar Factory, Clark’s house near Hampton Park, her childhood home off Meeting Street, and the expressway named after her are all entries in the app’s database. Similarly, the app tells the story behind the city’s restoration itself. “It happened because generations of preservationists dedicated themselves to preserving the city,” Northup says. “It’s a tale of triumph.” And with this app, Northup and her team hope to share that victory with all who wish to hear it.