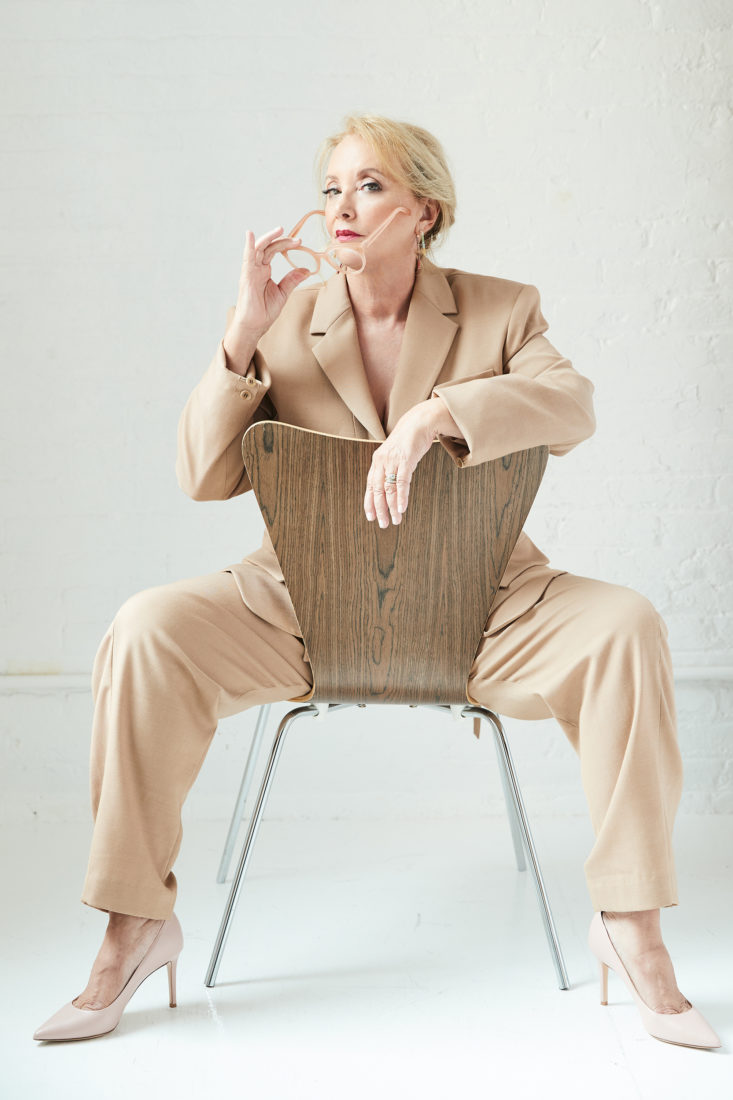 J. Smith-Cameron belongs to that very small cadre of actors about whom every time you see them on-screen you inevitably mutter, “Ohhh, I love her.” Now sixty-four, the Kentucky-born, South Carolina–raised performer has found herself on the receiving end of fresh, feverish appreciation thanks to her wry turn as corporate attorney Gerri Kellman on the dark-sided HBO hit Succession, back for its third season. With every smirk, purse of the lips, and swallowed sigh, the Tony-nominated stage veteran telegraphs what those of us raised in the South recognize as hallmarks of seasoned Southern womanhood—a wicked sense of humor, steely pragmatism, an earned weariness, and most of all, supreme, unswerving competence. Currently residing in New York City’s SoHo neighborhood with her husband, the playwright, screenwriter, and film director Kenneth Lonergan, and college-aged daughter, Nellie, Smith-Cameron imbues all her roles with a lived-in authenticity, a side effect, she says, chuckling, “of my always asking, ‘What would I do in this circumstance if this happened to me?’”

You were raised primarily in Greenville, South Carolina.

Yeah, through high school. My dad was an architect and engineer and his father, my granddad, was kind of a famous—he was the resident architect of the Biltmore house in Asheville. I think my dad was always a little bit hampered by what he thought he had to live up to. He was never quite happy and always looking for somewhere he might be happier. So we moved around a lot.

How did that affect you as a child?

I had a big brother and sister, and I was very much the baby. I was a shy kid who wore glasses and played the violin and didn’t have a best friend, so it was rocky. I still think of myself as shy and introverted. Luckily, my sophomore year [of high school] this senior girl behind me in Spanish class dared me to audition for the school play. And about that time, I also got contact lenses.

You went for it!

Yes! I put myself on the map being in The Diary of Anne Frank, and my whole social profile, if you will, changed. I had a write-up in the newspaper. It was weird. I was this invisible girl at school. And all of a sudden I was a celebrity. It was fantastic because I knew what I wanted to do after that.

A star is born.

[Laughs.] A star is born…in Greenville, South Carolina. I was always sneaking in from the side.

You seem so at home in all your performances. Has that always been the case?

I get nervous when I am acting, but I feel like the style of acting I connect with is more in the moment rather than preplanned. That’s the wonderful thing about Succession: They’re really looking for that reflexive input, the improvisation. I don’t worry about making it interesting or funny or different. My husband says this all the time, but what really happens in life is always more fascinating than some kooky thing you could make up.

Your ability to not have affectations, to appear natural—does that spring from your being comfortable with yourself  in real life?

No. [Laughs.] Somebody could ask me something in the supermarket, and I might become uptight because, you know, I don’t have any makeup on or some dumb reason. We all have these subtle masks or camouflages that we adopt for self-protection all the time.

Who taught you the most valuable lesson about life?

Not to be corny or typical, but my mom did. She always told me to live every moment, say yes to things. She didn’t get a chance to do that much in her life. I remember when I was heading out to L.A., she had just read a Laurence Olivier biography, and I was halfway down the driveway, and she yelled, “Remember, do what Laurence Olivier said! Be outrageous!”

I do. I associate with Southern literature. My first film was based on a Marjorie Kinnan Rawlings short story called “Gal Young Un,” which takes place in the backwoods of northern Florida. I love Southern cuisine, the gift of gab Southerners have, the eccentricity of the South. But the rigid conservatism and racism have made me feel schizophrenic, because there is no defense of that. And it is right to recognize the painful ancestry in the South. I have this weird hate/love thing about the South, to be frank.

Rectify was a rare television series that depicted a recognizable, unadorned South, unlike so many other series that show the South as—

Exactly. You based your character on that show, Janet—a shattering role as a parent swallowing grief she can’t articulate—on your own mother.

A cross between my mom and Rosalynn Carter.

Is there a role that has closely resembled who you are?

Well, my husband’s movie Margaret was written for me, and in many ways was very close to who I am. For almost the whole movie, my character and the daughter character are misunderstanding each other completely.

This has been a particularly rough few years to be a parent.

Yeah. I just read this advice column about how at some point, your kid steps forward and takes the wheel of life—whether they do it at thirteen or nineteen or twenty-five, that’s what growing up is. And with COVID, this adolescent group missed all these really important developmental steps. How’re they going to adjust? It broke my heart. The world is in a crisis, so you don’t really know what to do.

Where are you finding comfort?

I keep reminding myself that we are all kind of living in the in-between. Life is like an improv. You have to play it by ear.