Already booked a ticket to Levi’s Stadium in Santa Clara for the CFB National Championship Game in January? Here are half a dozen Bay Area spots where Southerners will find an authentic taste of home A smoked half chicken plate with collard greens, baked beans, and cornbread at Southpaw.

Let’s just say, hypothetically of course, that Clemson or Georgia or (crazy thought) Alabama runs the table and finds itself suiting up in Levi’s Stadium next January in Santa Clara, California. That means thousands of nervously hopeful Southerners will be booking flights to San Francisco International Airport (SFO) for the College Football Playoff National Championship. Now, you could stay in Santa Clara, and for convenience after the game, that’s not a bad idea. The quiet suburb is the largest among the Silicon Valley communities between San Francisco and San Jose. But understand that while the lodging is fine, Santa Clara’s known best for its tech company HQs (and major metro-area stadium), not for being a culinary destination. Since you’re traveling all the way to the West Coast, consider staying in San Francisco, just an hour away from the game. The city is a food lover’s dream, with one of the richest culinary scenes in the world. Naturally, thriving within it are Southern-rooted chefs, bakers, and restaurateurs who have infused their menus with the flavors and techniques they and their families brought from home.

So when…(or, to avoid a jinx, if)…you and your favorite team make it to the Bay Area early next year, bookmark these six San Francisco spots with Southern roots for a true taste of home. Prepare yourself for the line at Brenda’s French Soul Food. It started about three months after owner Brenda Buenviaje first opened in 2007 and has rarely let up. Buenviaje thought she’d open something more like a French bistro, but quickly found that her diners wanted dishes inspired by New Orleans. “They didn’t want the niçoise salad. They wanted the po-boy,” Buenviaje says. “They wanted the gumbo, and the red beans and rice. I was okay giving the people what they wanted because that’s what I was comfortable eating.” Buenviaje grew up in the small town of Harvey, Louisiana, on the West bank of New Orleans. “We were total New Orleanians,” she says. “My mom’s family reaches back to the Acadians, she was born in the French Quarter and she went to high school with Aaron Neville.”

The Beignet Flight—a sample of the four flavors on Brenda’s menu–especially so you can try the one stuffed with spicy crawfish. Buenviaje says it’s born from the crawfish bread found at Jazz Fest as well as her love of fusion cuisine. “I’m a big dim sum fanatic and love something stuffed with something else,” she says. Also go with the BFC (Brenda’s Fried Chicken), inspired by the spicy fried chicken she grew up eating at Popeye’s back in Louisiana. When owner Elizabeth Wells found the location for Southpaw in the Mission neighborhood of San Francisco, it reminded her of some of her favorite places in the South. “I immediately thought of New Orleans and Memphis, places with lots of walks of life,” says Wells, who grew up in Montgomery, Alabama, and went to college in Nashville. “I wanted a place that felt like home and where I could get to know my neighbors. That’s what happened, and now we take care of each other.” Known best for barbecue and craft beers brewed in-house, Southpaw now stands as one of those local neighborhood spots. The smoked pulled goat appetizer, sauced with salsa verde and topped with house pickles. “It’s a fusion of flavors, but it embraces the idea of barbecue and smoking while also blending in other cultures and flavors we love,” Wells says. The shrimp and grits, with grits sourced from the Mississippi Delta. And the BBQ brisket. Be sure to try the white barbecue sauce, inspired by Big Bob Gibson BBQ in Decatur, Alabama. (There’s also vinegary North Carolina and mustard-based South Carolina styles as well as South Paw’s house sauce, which is closer to Memphis-style.) The first thing most patrons notice about Rusty’s is the hospitable atmosphere. There are no TVs, so it’s common for strangers to strike up conversations. “We’re all about fellowship with friends and family,” says owner Rusty Olson. Rusty’s dad was a Citadel grad in Charleston, and Rusty grew up all over as a military brat. But he spent his summers staying with grandparents in South Carolina and North Carolina, and he went to college in Charleston and stayed there a few years before moving to Northern California. “Coming from the South, you don’t realize how important that feeling is until it’s not there,” Olson says. “When you come in here, and it’s warm and there’s nice music and people smile at you, it feels like home.” When Rusty opened, he says a sweet older lady in his mother’s church remarked, “That’s good. They need some good food out there in California.” A burger at Rusty’s Southern.

North Carolina-style chopped barbecue with tangy slaw and Cheerwine. “We have guests come in who sit down and say, ‘I’m from North Carolina. Don’t let me down,’” Olson says. “And inevitably, I see them put their fork down and say, ‘This is it. This is what I grew up on.’”

This casual restaurant is structured more like a bar (Read: pool tables and nearly 300 kinds of whisk(e)y on the menu) with communal tables, a lounge section, and a few tables. It’s named for owner Jamie Boatner’s mother, who grew up in the small town of Shady Dale, Georgia, and whose nickname is Hazel. “She was Mary Elizabeth, but she had hazel eyes,” Boatner says. He adds laughing, “She is an excellent Southern cook, and she likes to tell everyone she owns this joint.” For the menu, Boatner’s executive chef Martin Fennelly taps into the flavors of his native New Orleans. “You can taste it in the sweet potato mash marinated with root beer and in the dirty rice made with liver and gizzards,” Boatner says. Hazel’s recipe fried chicken with pickles and served in a skillet. Braised oxtail and stone ground grits. Grilled gator skewers served over fried onions. Maybe a Sazerac. Why not?

Opened by celebrity chef and Greenville, South Carolina, native Tyler Florence, Wayfare Tavern is about as warm, cozy and buzzing as you can imagine. Taxidermied game hangs from dark brick walls. Business professionals lean in for power lunch conversations at leather-seated booths while tourists in jeans pore over the menu. And it’s in that menu itself where you’ll find Florence’s unmistakable nods back to the region where he grew up. “It’s who Tyler is,” says Tony Marcell, a partner at the restaurant. “He’s from the South, so he’s unconsciously doing what he does best. It’s the most natural place for him, and it’s from his soul.” 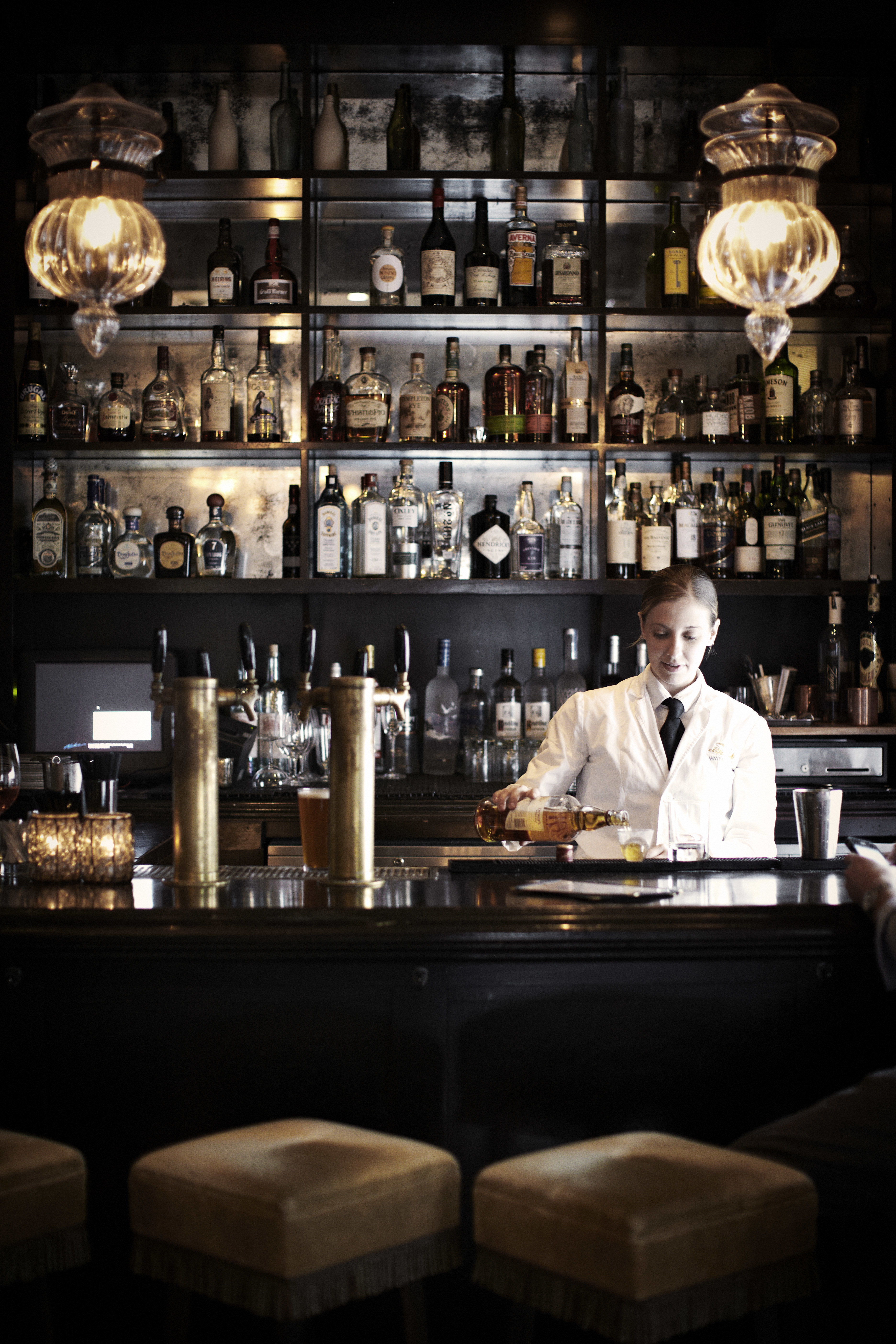 Van Dao, a.k.a. the Biscuit Elf, serves roughly seven different kinds of biscuits (and maybe a scone or two) from a tiny kiosk in San Francisco’s Ferry Building on Saturdays and Sundays. The biscuits span the sweet-to-savory spectrum, from Cheddar Cheese to St. Benoit Lemon Yogurt. In the case of the Double Bacon Maple, which uses bacon fat in lieu of butter, he’s checking all the boxes. Dao grew up in Niceville, Florida, where he says he was raised almost exclusively on Vietnamese cuisine. Biscuits, ironically, entered his life in San Francisco, when he was a pastry chef at Brenda’s French Soul Food (see above) “banging out biscuits and beignets.” Definitely the Cinnamon Bun biscuit, Dao’s most popular seller. “I’m capturing the classic cinnamon bun nostalgia we all have,” he says, “but there’s a surprise because the biscuit dough is salty and there’s an unexpected textural crunch.”

The Details:
Located on the Bay side of the Ferry Building near Peet’s Coffee, Delica, and Mijita
One San Francisco Bay Trail, San Francisco
415-678-9253
Note: Only open Saturdays and Sundays

Tanner Latham is a travel writer and storyteller based in Oakland, California. As a native Alabamian and an alumnus of the University of Alabama, he enjoys watching football games at least two hours earlier than his family and friends back home.