Azaleas Worthy of an Encore

Created by an inventive Louisiana horticulturist, these season-defying plants burst with color nearly all year Encore Azaleas brighten landscapes with vibrant colors in the spring, summer, and fall.

While each Southern season brings its own rich foliage, spring is when the region’s storied gardens truly shine, their soft pastels and vibrant greens painting the landscape. While dogwoods, zinnias, and wisteria certainly spark enchantment, Southerners have a soft spot for azaleas, the spring-blooming flowers known for candy-colored petals of pink, purple, and red. The striking blooms are synonymous with spring, creating a lush backdrop for the South’s most agreeable months. Like all good things, however, azalea season has always come to an end—until Encore Azalea came along, that is.

It all began in Folsom, Louisiana, a rural village north of New Orleans. Growing up in a farming family, Robert E. “Buddy” Lee was drawn to the natural world from a young age. “I’ve always been interested in plants,” he says. “I was collecting seedlings before I entered grade school, always asking questions.” The passion stayed with him—after working part-time in nurseries throughout high school and college, he eventually left a job in the medical field to pursue horticulture as a full-time career. By the early eighties, Lee had built a successful nursery in Independence, Louisiana, focused on the region’s native flora, and of course, azaleas. “I’ve always been fascinated by azaleas,” he says. “They seem to be the number one plant of the South.” It was in his own nursery that Lee began experimenting with plant breeding, envisioning a series of azaleas that would bloom for not one but multiple seasons. After much trial and error, it was a cross between traditional spring-blooming azaleas and a rare Taiwanese summer-blooming variety that gave rise to what are now known as Encore Azaleas: evergreen flowers that bloom in spring, summer, and fall. “When you cross plants, each seedling is unique,” Lee says. “That alone was rewarding to me—combining these genetics to create something beautiful and entirely new.” Encore Azaleas can be planted in a variety of settings, including in outdoor planters and garden containers.

Today, Encore Azaleas are the best-selling plants of their kind. Each year, their dazzling cycle begins in spring, when the season’s first flowers appear. Come summer, the azalea’s “second act” begins as new buds start to bloom, resulting in full, bright flowers all through the fall. In addition to their rainbow of hues (thirty-three color options, to be exact), the flowers are more sun tolerant than other azalea varieties. Thriving equally in sunlight and partial shade, the blooms are easy to care for, meaning new and seasoned gardeners alike can find success. “They’re very forgiving,” Lee promises, “and they’ll last a long, long time if you take proper care from the beginning.” He advises planting them shallowly, incorporating acidic materials like pine bark mulch, and avoiding overfertilizing.

Wherever Encore Azaleas are planted, the goal of the company is not much different from Lee’s own: to leave the world a bit more beautiful than before. “I once heard someone say that you could have the biggest mansion or the tiniest shack, but when the azaleas are blooming, everything is just gorgeous,” he says.

—Choose a spot that offers light from direct sun or high filtered shade. Four to six hours of sun or filtered shade per day will encourage optimal blooms. Try to provide morning sun and afternoon shade protection if possible.

—Make sure your soil is well-turned and dig a hole as deep as the azalea’s root ball and twice as wide. 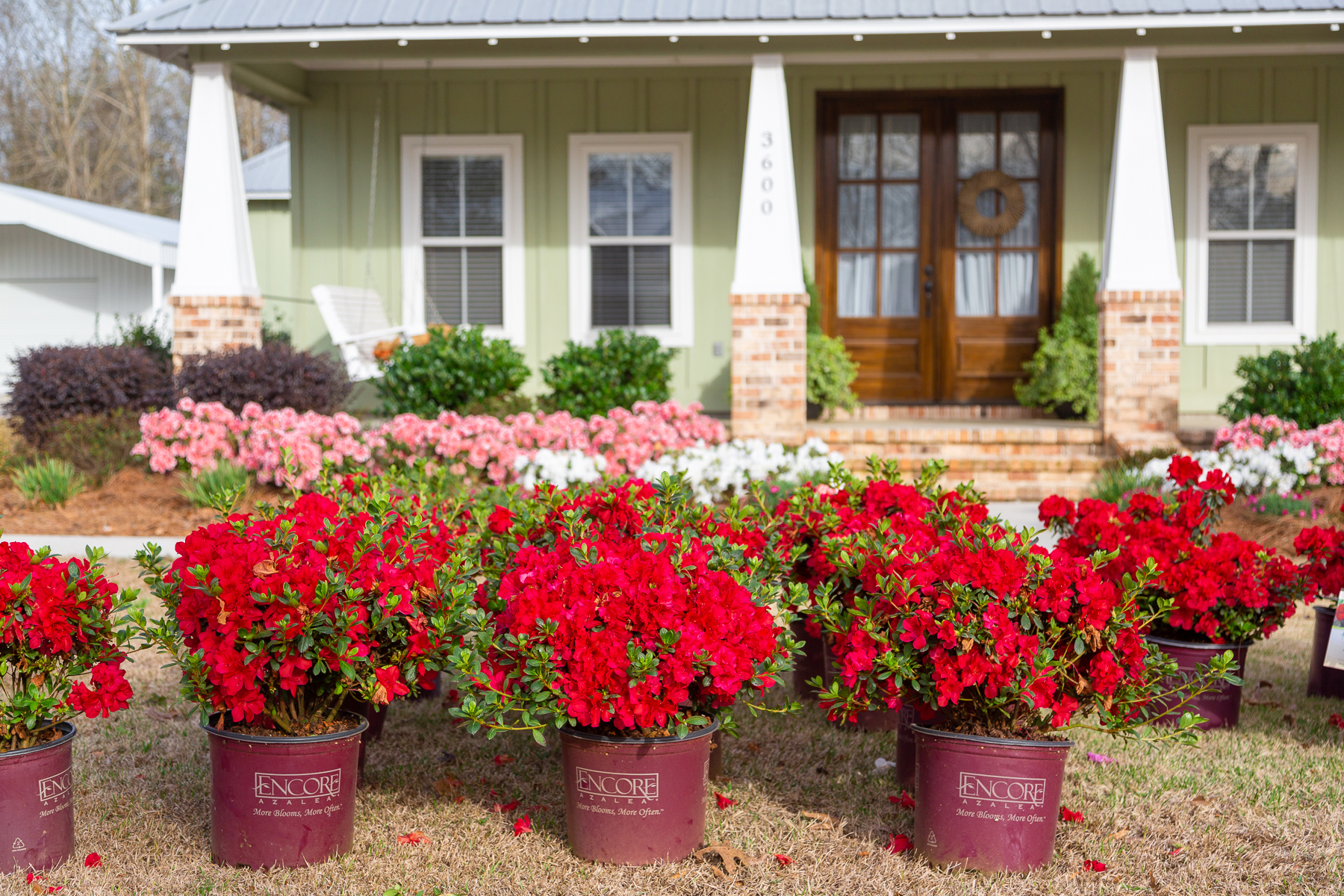 Encore Azaleas will thrive in either full sun or high filtered shade.

—Mix some organic material with soil and place a bit of the mixture in the hole.

—Remove the azalea from its container and loosen the root ball lightly with your fingers.

—When placing the plant in the prepared hole, make sure the top of the root ball is slightly above the soil level. Encore Azaleas will suffer if planted too deeply. —Make sure your root ball is moist, then pull some soil around the plant, water thoroughly, and cover with mulch. When mulching, avoid covering the top of the root ball with mulch.

—Newly planted azaleas will require routine watering during the first year, but once established, they will not require frequent watering.

—Prune your Encore Azaleas immediately after their spring flowering.

To learn more about these reblooming azaleas, visit EncoreAzalea.com