Tennessee’s mountain hideout never misses a chance to reinvent itself In Chattanooga, Tennessee, you could have recently won the following things: tickets to see Huey Lewis and the News at Riverbend 2011, the city’s nine-day summer music festival; the opportunity to name the world-class aquarium’s newborn penguin (she is Shivers!); or the privilege of cloaking the city’s buses in your own two-dimensional artwork.  A universe of Southern opportunity.

But you could also have lost the Tennessee Tree Climbing Championship. I know this because I held the title for a year, having snatched it from my older brother, the “former champion,” as I took to calling him, in a heated battle in Knoxville. He won it back the next year in Nashville, and then we were in Chattanooga for a 2003 hometown climb-off in a downtown park with towering hackberries and thick-trunked chestnut oaks. We were neck and neck. Sweating, sunburned, a few dozen folks wearing Vermeer and Husqvarna baseball caps cheering us on. Including Mom.

My brother and I were working hard to keep it in the family. We both made it to the final event, a timed flight through a tree’s canopy to hit five different stations before descending safely to the ground. Then we got disqualified. He grabbed a branch that dislodged. Nothing can fall, said the judges. You’re out. Then I, too, grabbed a branch only to have it pop from its collar (just too freakishly strong, we decided). The winner was a guy with a goatee shaped like an anvil point and a tattoo of a chain-saw chain circling his bicep, immediately adjacent to a real chain-saw wound. His name was Craig.

So what do you do after losing the Tennessee Tree Climbing Championship in Chattanooga? I woke up the next day and went to work. The sun was peeking over the surrounding mountains, and it was already humid, already a little sweltering. But I had a job up on Lookout Mountain, that monolith of wealth, Civil War history, a fancy Presbyterian college, and a million musket balls buried just beneath the peat. A big bur oak right on the ridge was hanging precariously over a house. I gassed up my chain saws and drove from my downtown apartment on Oak Street ($255 a month), past the University of Tennessee–Chattanooga, and took a right on Main Street. Despite losing the championship, I still felt like the city was mine.

Chattanooga is a shape-shifter, a city in flux. It once had—and this is no joke—the worst air quality in the country; 1969, “the dirtiest city in America.” It was industry and smokestacks, and then the mountains trapped it all into a toxic pudding that filled up the valley. Throughout the 1980s people started to pack up and leave. But American cities and American people have this funny resilience. A bunch of artists, eco-minded entrepreneurs, and visionary residents worked doggedly to turn the town from an industrial armpit into a global model for environmental rejuvenation—electric buses carting people from downtown up the mountain, razed factories sprouting into pedestrian parks and green space. The mayor flies all over the world to give presentations to city planners in places like Ipswich, Australia, and Curitiba, Brazil. He talks about the old textile district on Market Street that became Warehouse Row, a regional hot spot for shopping. He mentions the dilapidated mansions overlooking the river that were revamped into the Bluff View Art District. Art is everywhere now, in fact, along with fancy restaurants and fresh-brewed local beer.

I could almost see Warehouse Row in my rearview mirror as I drove down Broad Street and past St. Elmo, that ancient suburb where my uncles pseudo-homesteaded in the eighties, buying up towering, decaying Victorian homes slated for demolition—$10,000 and a ton of elbow grease. The route up Lookout is an S-curve extravaganza that the college kids dare each other to navigate without brakes. I took it slow, turtling my way through the territory of Chattanooga’s classic triumvirate tourist draw: Rock City, Ruby Falls, and the Incline. The old folks said: Hell, we got enough natural wonders to hook all kinds of highway drivers. Exit here for a gritty, organic, limestone Disneyland. By the 1950s, nine hundred “See Rock City” signs were hand-painted on barn roofs from Texas to Michigan. And it worked. These days, more than a half million people visit each year.

“Chattanooga is something you can have anyway you want it,” writes native Noogian poet Ishmael Reed in his 1966 poetry collection, Chattanooga. And he’s right. For outdoor buffs, the immense, toothy boulder fields make it the Southeast mecca for rock climbing. There is a ridge on the north side of Lookout that provides the area’s premier launching pad for hang gliders. There are nearby gushing rivers with enough rapids to lure kayakers from all over the world.

It’s also a prime stop on any civil rights pilgrimage. Dr. King, only thirty-one years old, stood in the city’s auditorium in 1960, captivated his audience for almost an hour, and then bellowed, “Let freedom ring from Lookout Mountain.” The refrain made it all the way to Washington in his “I Have a Dream” speech.

For the Southern technophile, according to the New York Times, the city’s smart-grid Internet service will be two hundred times faster than standard broadband, the fastest in the States and matched by only a few international cities (such as Hong Kong). It is Chattanooga’s fruit from the stimulus plan. A gaggle of developers said: Hell, give us a few million and we’ll put this town on the global cutting edge of business and technology.

And the music! It is deep-rooted. Yes, Huey Lewis is on his way, but Chattanooga is the hometown of Bessie Smith, the “Empress of the Blues,” who used to sing in the clubs so loud and elegant and forceful that, even unamplified, her contralto voice saturated the streets. The Mountain Opry is still kicking up on Signal Mountain, too, continuing three decades of bluegrass and old-time music every Friday night. And the Chattanooga Symphony & Opera—the only symphonic and operatic marriage of its kind in the country—recently celebrated its seventy-fifth anniversary. 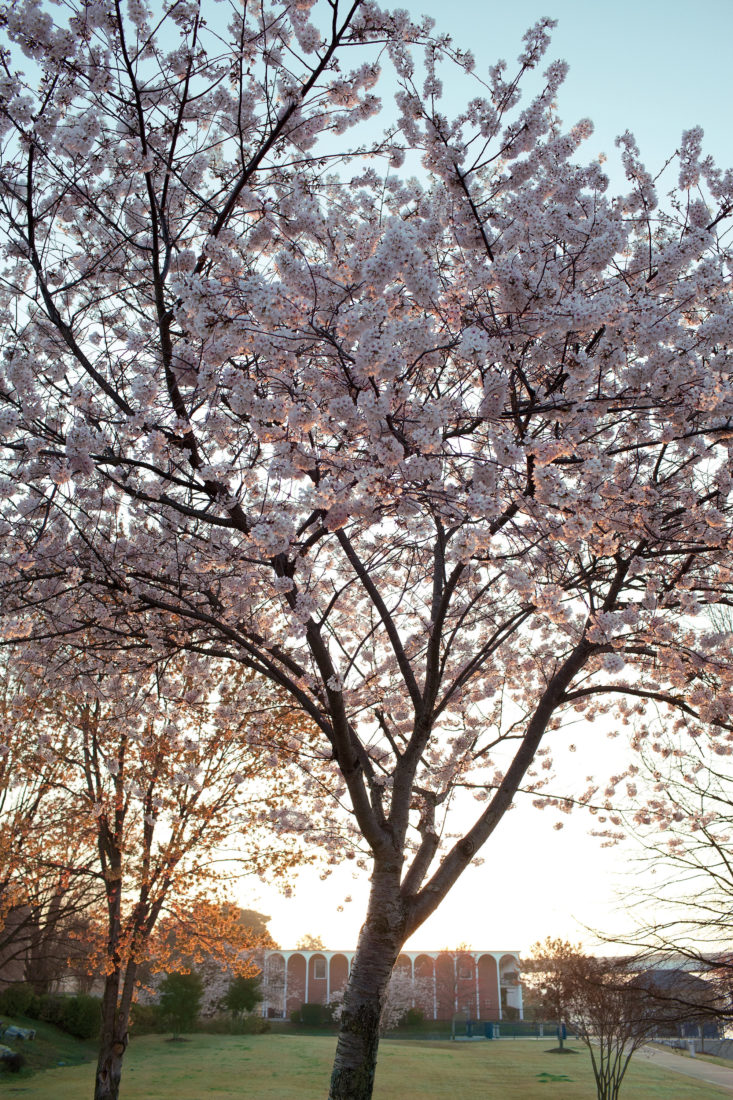 A blooming tree on the North Shore.

I remember humming the tune to “Chattanooga Choo Choo” as I climbed up the bur oak: Pardon me, boy/Is that the Chattanooga Choo Choo? It’s catchy. Kind of sticks in your head. I had to cut the oak back, lowering the limbs with ropes and carabiners not for a prize, but for a paycheck. And when I reached the top, I could actually see the Choo Choo, or at least the tiny dot of its gargantuan sign sitting on top of the old station turned hotel. In fact, I could see the whole city from up there on the ridge.

The whole city—a fragmented whole. There are the touristy parts, the rich parts, the nature-y parts, and the part on Broad with an authentic carnicería where you can buy cow tongue and fresh tortillas. Sometimes the parts blend a little, overlap. Sometimes they stay as distinct as a store-bought watercolor palette.

Chattanooga is “the summit of what you are,” writes Reed.

I was the Tennessee Tree Climbing Champion. Now I was simply back to work. Chattanooga, too, sheds her old skin and grows anew. A midsize city of fresh beginnings. A deep-down Southern kind of resurrection.