The Wild Story of a Whimbrel Migration Mystery Hudsonian whimbrel are the only species of whimbrel found in North America.

As we boat up to Deveaux Bank, a horseshoe-shaped sandbar off Wadmalaw Island, South Carolina, thousands of feathered bodies drift in the sky, skim the water, and mill on the dunes. A cacophony of trills, chuckles, and screeches fill the air, as does the salt-air pungency of thousands of seabirds conducting daily business. It’s late May, and we’re here to see evidence of a groundbreaking discovery in shorebird conservation: This mile-long, shifting strip of sand is the key to the survival of the Hudsonian whimbrel, North America’s only whimbrel, providing the rare shorebird with food and refuge on its globe-spanning migration. “Deveaux isn’t a place they stop—it’s the place they stop,” explains Felicia Sanders, the shorebird biologist for the South Carolina Department of Natural Resources, and the one responsible for solving what was until now a mystery.

Whimbrel are mid-sized curlews possessed of a stocky golden-brown body, spindly wading legs, and an impossibly long, curving bill. As migratory shorebirds, they spend their lives in transit: wintering in South America, summering and nesting in the Arctic. Scientists knew that on that roughly 3,000-mile journey, the whimbrel shuttling along the Atlantic Flyway only take one notable break—they just didn’t know where. Deveaux Bank, seen from above.

“I met Andy Johnson [a Cornell Lab ornithologist] in 2013, when I was up in the Arctic,” Sanders recalls. “His tracking data showed birds stopping over somewhere in South Carolina or Georgia.” Sanders never suspected that Johnson’s stopover site might be in her own backyard until she took a videographer to Deveaux to film pelicans nesting at dawn a year later, and noticed whimbrel leaving in suspiciously large numbers.

Sanders immediately camped out on Deveaux. The sandbar is always full of birds (as many as a million might roost there—it’s difficult to count birds in the dark), but the whimbrel she saw that night spurred her to spend several years estimating exactly how many might be roosting there and then slipping out before or at dawn to spend their daylight hours foraging for fiddler crabs. When she was sure—and had arrived at a number unbelievable to most scientists—she put in a call to Johnson: “I think I’ve found our stopover.”

Whimbrel are in steep decline in North America, due in part to the loss of habitat like Deveaux Bank. Their numbers plunged by two-thirds in the last twenty-five years; only 40,000 of the eastern population remain. And what Sanders discovered is that half of them—20,000 birds—pause at Deveaux for their only major stop, a month-long, fat-storing intermission that ensures they’ll make it north and have the energy to breed and nest upon arrival. Whimbrel spend their days foraging for fiddler crabs in the surrounding marsh and even the ACE Basin, and return to Deveaux at dark to roost.

They aren’t the only species depending on Deveaux Bank—red knots, brown pelicans, glossy ibis, and egrets and herons by the hundreds all roost or nest there. To the average human, Deveaux might appear as an isolated spot to pull in, crack a beer, and let the dogs run (please don’t, says Sanders). To shorebirds, it’s one of the few remaining coastal havens: surrounded by water on all sides, free of predatory mammals, and undeveloped by humans. Erin Weeks, another biologist with the SCDNR, puts it simply, “Whimbrel are here for the same reason all the birds are here: It’s safe.” Deveaux also offers feeding grounds in the surrounding marsh and in the nearby, ultra-resource-rich ACE Basin, making it an ideal stop for birds with a few thousand miles left to fly. Brown pelicans are one of the many other bird species that use Deveaux Bank.

As dusk nears, we step off the boat onto the only area of the island the public has access to under Deveaux’s hard-fought status as one of South Carolina’s five shorebird sanctuaries. The sun turns from butter-yellow to scarlet and sinks further. We crouch in the dunes, watching, as waves of whimbrel begin to arrive, in groups of ten or twenty or more.

“You learn to recognize their shape and the way that they move,” Sanders tells me, binoculars fixed to her eyes. They trill as they fly, dipping and rising in tandem before lighting on the shoreline just twenty yards away. Behind us, the full moon rises, and the whimbrel, still arriving in droves, become dark silhouettes along the beach. Tonight marks the end of the migration. The biologists think that tomorrow, they’ll be gone, using the fat they’ve stored over their month here to propel them to the Arctic, where they’ll lay eggs and raise chicks, ensuring the next generation.

Thankfully, the SCDNR owns and protects Deveaux, and Sanders and University of South Carolina graduate student Maina Handmaker are working to gather more data on whimbrel. This year, they painstakingly trapped and tagged eleven birds (whimbrel are wary, clever, and not easily caught). That tracking data will provide a window into the birds’ secret lives, giving clues for how we can ensure the habitat they need survives. Felicia Sanders, the shorebird biologist for SCDNR, spends most days in May on Deveaux, studying whimbrel.

Migratory shorebirds like whimbrel represent a delicate thread connecting ecosystems—from Venezuela and Brazil to the coast of South Carolina and Georgia to the Arctic of Alaska and Canada. “Whimbrel live among mangroves, in mud flats, on tundra, in all sorts of habitats,” Sanders says. “But for this window of time, they’re here.”

With the gift of their presence comes responsibility. “This is life and death for them,” Weeks adds. “They depend on Deveaux in a way we can’t even fathom, and what we do here to protect them determines whether there are or aren’t whimbrel in the rest of the world once they leave us.” Whimbrel line the shore of the sandbar after flying in to roost for the night.

Watch a short film of the whimbrel’s time at Deveaux, produced by Andy Johnson of the Cornell Lab of Ornithology. 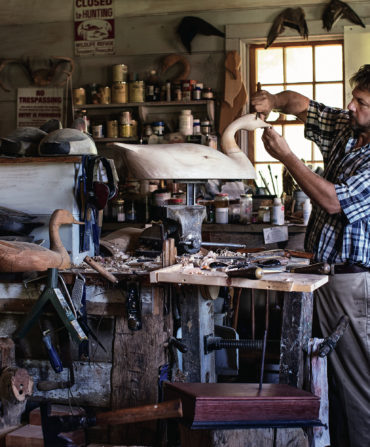