After the holidays, the Atlanta chef simmers a rich, fragrant broth as the base for turkey pho “My mother always made some sort of broth with all the leftover turkey from Christmas and Thanksgiving meals,” says Ron Hsu, executive chef of Atlanta’s Lazy Betty, the inventive tasting-menu-focused restaurant he opened in Candler Park in February 2019. He named the restaurant—playfully—for his hard-working mother, who operated several Atlanta-area restaurants from 1998 to 2008, and who passed away in May. “I’ve taken on doing this too, and I love pho. Nothing hits the spot like a hot steaming bowl of noodle soup in cold weather.”

Holiday meals for Hsu’s family were always epic affairs. “My mom immigrated seven siblings over from Malaysia, so our house was always the central location for gatherings,” he says. “It was very common for us to have up to forty people at our house.” Hsu’s recipe is the kind that can simmer away all afternoon—right after a Christmas lunch or a few days later as fuel for a college-football gameday. “Usually, after all the eating was done and the broth was simmering, we would have multiple tables of mahjong (a kind of Chinese version of rummy) going,” Hsu recalls. “The tables were organized according to skill level and age. For those who didn’t play mahjong, Christmas movies and football were the other options.”

This year, a pot of leftover turkey pho will likely be on Hsu’s stovetop when the University of Georgia takes on Baylor in the Sugar Bowl. “I went to UGA for undergrad,” Hsu says. “Go Dawgs!” 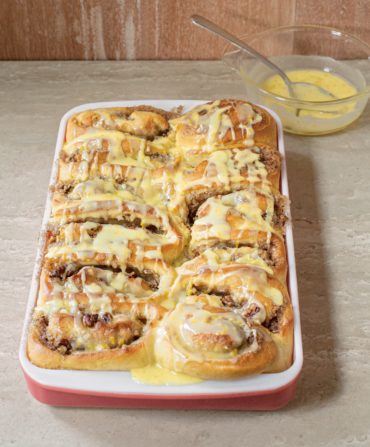