A Mother-Daughter Duo Connects on the Fly

Two women cast for trout, and other things that lie beneath the surface 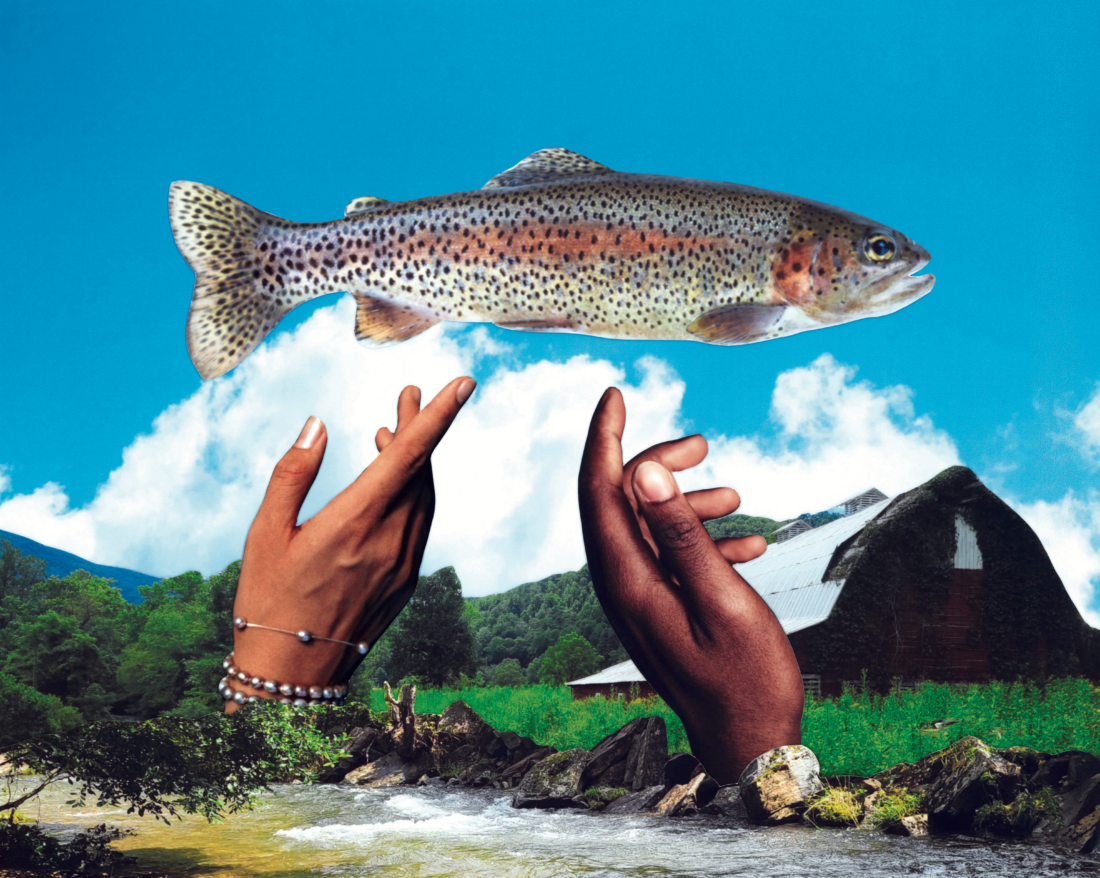 The photo was one of the first images in our family album before we lost our mementos in a flood: my mother, wearing a wide-striped T-shirt indicative of the early 1980s, holding a big-bodied silver fish as long as her forearm over the sink as she smiles at the camera, proud of her catch. Mom didn’t start fishing until she was an adult, when my father introduced her to the hobby. In the early days of their marriage, they spent hours on the shores of lakes in South Carolina, Alabama, Tennessee—wherever their management jobs sent them. Sitting on five-gallon buckets, hoping to outfish each other, the farmer’s son and the mason’s daughter tried to figure out what love looked like.

For a long time, my parents could not afford to be catch-and-release-type people. Their family, which later grew to include me and my little brother, Nicholas, needed to eat. Fishing served a dual purpose: It was a cherished pastime, but it also gave our parents a way to add a bit of variety to our meals. Conventional fishers, they would find a spot on Old Hickory Lake in Tennessee, where we lived during my early childhood, catching panfish mostly, like bream, crappie, and perch. The occasional catfish made its way onto our plates, and we kids dipped our catfish nuggets in ketchup, pretending they were chicken nuggets from McDonald’s, even though we knew the difference.

When I was nine, we moved back to South Carolina, and my dad continued fishing—mostly at Lake Greenwood, not far from our farm in Silverstreet. Now that my parents were divorced, my mother no longer used her rod and reel. She still talked about fishing, though her sentences ended in ellipses, trailing off before she could finish. Two decades would pass before she found herself back by the water.

My mother and I could not be more different: She is a fashion designer by trade; I struggle to perceive the joy she gets from bar-tack pockets or perfectly sewn seams. She cannot comprehend her outdoorsy daughter’s affinity for places where I could get dirty, hurt, or lost. A lover of manicured nature, like a well-tended garden, she was bewildered by my desire to sleep outside, with precious little between me, the stars, and the animals she was sure were out to get me. Over the years, we taught each other things: She showed me how to sew, and I helped her navigate her iPhone. But we never had the opportunity to learn a new skill together.

What we both dreamed of was fly fishing. Mom had seen stories about it on TV, I often read about it in magazines, and it captured our imaginations. The elegance of the sport drew my mother. She could see the art in the endeavor—the thin, graceful rod and the sylphlike arc of the line when cast. For me, it was all about the setting—the deep green of the surrounding forest, the roar of water as it ran over rocks, the nearby mountains cloaked in blue haze. As adults with disposable income, neither of us was really in it for the fish anymore but for what the aquatic dwellers represented: respite, a pause in the relentless churn of earning a living.

This churn had made us into something next to strangers. We frequently found ourselves speaking past each other, failing to grasp the nuance in each other’s sentences. Frustrated, she and I whittled down our daily interactions to to-do lists and requests, mostly. We wore our way into routines, anticipating what the other would say.

“One day I’m gonna do that,” my mother said when a fly-fishing story appeared on CBS Sunday Morning. “Of course, Mom,” I said, nodding the way daughters do when mothers repeat something for the millionth time.

Change happens gradually but becomes clear all at once: Years of subtle shifts in my mom’s posture and a major back surgery were making her feel old before her time. I noticed it one afternoon when she picked up her leg to ascend the stairs of her house—right foot first, gingerly, her fingers tightly wound around the cast-iron railing as she put her weight on it. Watching her, I realized there might soon come a day when I would regret not booking that fly-fishing trip.

At the recommendation of a friend, I picked up the phone and called Simons Welter, one of the few female fly-fishing guides in our region, and booked an excursion for the next weekend. Ill prepared but determined to help my mama live out her angling fantasy, I ushered her into the dressing room at our local REI, searching for a well-fitting quick-dry shirt and pants that would remain comfortable once wet. We left home that Sunday morning before sunrise, winding our way out of Upstate South Carolina into Western North Carolina, up to Cashiers. Nervous and scared to break the charm the forthcoming experience held over us, we didn’t say much.

I wondered if I was asking too much of her with this adventure, and I knew from the way she got out of the car—tightly coiled and a little apprehensive—she wondered, too. Undaunted by our stilted and tense demeanors, Welter bounded out of the front door and welcomed us into the fly-fishing shop.

Mom’s attitude changed when she saw the fly-tying room—as a crafter, she could appreciate this place full of brightly colored feathers, furs, beads, and yarns. Enchanted, she spent the better part of the first hour looking at and learning about all of the different patterns meant to simulate the life cycle of bugs that our fish (in this case, trout) would probably find appetizing.

Once we were outfitted with the right gear, out in the parking lot we started learning fundamentals like how to set up our fly lines, casting and developing a feel for the line while the shop dog, Buddy, stared at us from the porch, bemused at the newbies practicing in front of his store. Pleased by our progress, Welter decided the time had come to take to the water. We made our way to Caney Fork, which flows into the Tuckasegee River, and after a little more instruction, began to test whether the fish in the creek would take an interest in our flies. Knee-deep in the stream, we fell into a rhythm. There was no need for words. After a couple of missed hits, we had to learn how to set the hook and fight the fish. In our photos from the day we are smiling, rainbow trout writhing in our palms, ready to reenter the water.

We kept casting until our arms grew heavy and our legs ached with fatigue. “Just one more,” I said to my mother as she stood on the shore, taking a break. “Well”—I watched my line travel past without so much as a nibble— “one that gets a bite anyway.”

“That’s how you know you’re an angler in the making,” Welter said with a laugh. Mom and I each had a couple of “just one more” moments. Time slid off the clock, and soon afternoon arrived. Bites became harder to come by, so we decided to pack up.

As my mother cast her line for the final time, I stood on the bank, wondering what it was like to be divested from a part of yourself for twenty years—maybe longer. I pondered the woman she’d been before she became my mother and had to constantly calculate and mitigate risks. I learned, on the car ride home, that she was thinking something similar about me, and my constant quest for quiet, scenic spaces. She wanted to know if I was always like this, paying attention to aphids and tree species, whipping out guides to identify unknown mushrooms. For the first time she saw my focus and inner stillness, the connection I have to the natural world. In the car we both fumbled for eloquent responses to the questions the day’s excursion had brought up, but the spell was broken. Back home, when we emerged from the car, we were talking past each other again—about the chores that needed doing before we could start the week, about the work situations awaiting us. The answers we sought appeared to exist only on the water, and we both knew it. As I opened the door to her house, my mother looked over her shoulder and said, “So—when do we get to go again?”