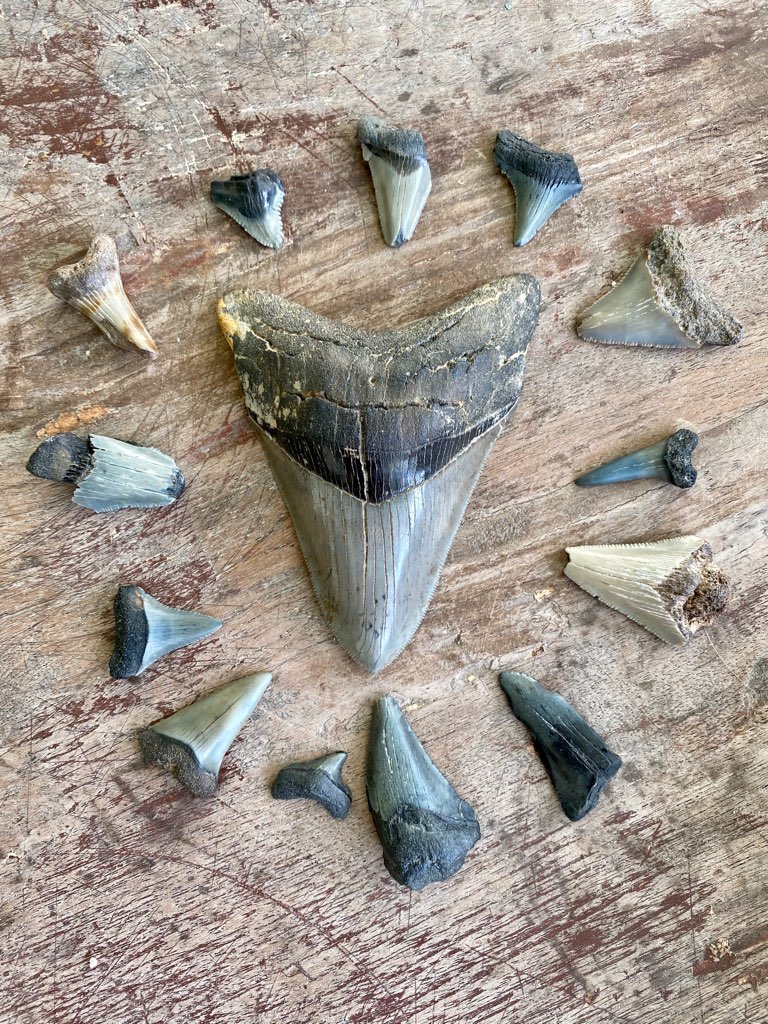 “For most people, the thrill of finding a shark tooth is knowing that you are the first human to set eyes on it and hold it,” says Ashby Gale. “To be able to have that connection with an extinct animal drives that fascination.” Gale is no stranger to fossil-finding. It’s a love he’s made a career of as a paleontologist and the founder and primary tour guide of Charleston Fossil Adventures, based in Charleston, South Carolina.

“Here in South Carolina, and in the Southeast, we are incredibly fossil-rich,” Gale says. Fossilized shark teeth abound and can range in age from 10,000 years old to an astonishing 75 million years old. Gale’s comprehensive book, A Beachcomber’s Guide to Fossils, which he co-authored with his parents (his father is an ecologist, his mother an artist), will be out this November. But in the meantime, we caught up with the paleontologist to get his expert tips for finding shark teeth and other fossils on Southern beaches.

A good place to start is with a beach that undergoes dredging and beach renourishment. This process vacuums up tons of fossil-rich sand and sediment from the ocean floor, which then ends up on beaches. And once you’ve picked a beach, get to know it. The first time you go out, Gale advises, go at low tide to get the broadest scope possible, and check back often. “It’s a new beach every twelve hours,” he says. Hurricane and Nor’easter seasons shake things up well, but you can find fossils year-round. Gale names Folly Beach in Charleston as his personal favorite, along with the Wilmington and Topsail Beach areas of North Carolina, and Amelia Island and Jacksonville in Florida. And of course, Venice Beach, Florida, is known as the Shark Tooth Capital of the World.

Scan shell piles and check around the strand line

“The ocean sorts things by size and density,” Gale says, and it will collect similar items and deposit them on the shore together. Therefore, your best chance of finding a fossil is in piles of shell or gravel, and if you’ve found one, there are likely more. If there aren’t any obvious piles, check the strand line (the line where the ocean deposits organic material and debris at high tide). Gale doesn’t advise digging; you’ll just cover less surface area and encounter more of the same material that’s on top of the beach. “Let the ocean do the hard work of sorting for you,” he says.

Color is the single biggest signal that you’ve found a fossil. You are looking for a very black color, which comes from phosphate, a sediment that commonly forms around bone and other material that contains calcium. Though fossils in the Southeast can occasionally take on other colors or be bleached by the sun, the vast majority will be black. Shark teeth from present times that are still white are extremely rare, as there are so many more fossilized teeth from the millions of years of sharks’ existence (in thousands of discovered teeth, Gale has only found three from the present day).

Most of the time you won’t be coming across a large megalodon tooth in perfect condition, so it’s important to keep your eyes dialed down. “If you get used to spotting the small ones, you’ll know when there’s a big one,” Gale says. And not all teeth look like those of the iconic megalodon or great white—the majority, in fact, are long and slender or T-shaped (these often come from sand tiger, lemon, and reef sharks). Some may be fragmented, too, so don’t limit yourself by only looking for triangular shapes.

Whereas shells feel thin and fragile, mineralized teeth are very sturdy, and this denser material can help you differentiate from oysters or shells. Symmetry and patterns, far less likely in rocks and other debris than in a tooth, are also tell-tale signs.

“If you limit yourself to looking for shark teeth, you’d be walking over about 80 percent of the fossil material on the beach,” Gale says. Beaches will commonly turn up fossils from a variety of marine and terrestrial mammals and other animals—including saber-toothed tiger teeth, Ice Age box and pond turtle shells, sea robin fish skulls, bison teeth…and the list goes on. As with shark teeth, look for that dark black color, symmetry, and patterns.