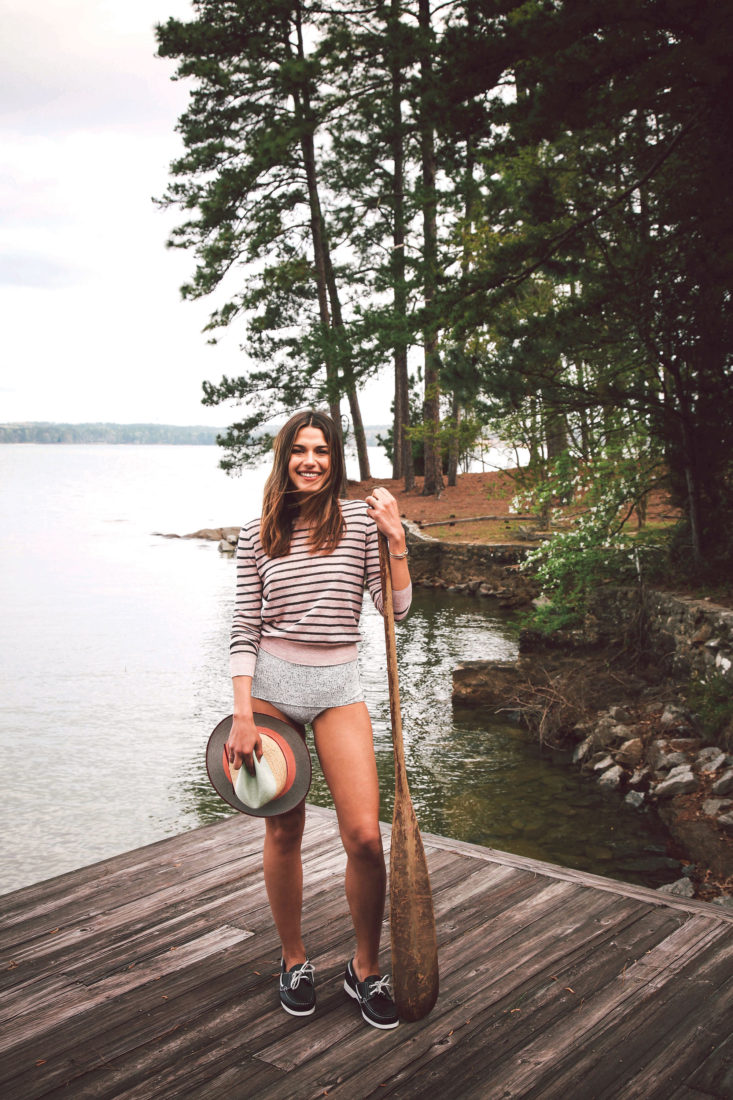 WHY WE LOVE IT:
If the beaches of Gulf Shores are Alabama’s front porch, then Lake Martin is its living room. The 41,150 acres of glistening water, formed in 1926 by damming the Tallapoosa River—creating, at the time, the largest man-made body of water in the world—are where Birmingham, Montgomery, and Auburn set up camp from Memorial Day to Labor Day. It’s a place where pontoons seem to outnumber speedboats and the act of coming together—slowly, casually, usually by boat—gets celebrated on docks, porches, and ice-chest-laden party barges.

As befits this living-room vibe, Lake Martin—two hours southeast of Birmingham—is largely residential, with homes tucked into the forested landscape. Three hundred of them were constructed in the 1950s by the Russell family, whose textile mill put nearby Alexander City on the map and who still owns a good portion of the shoreline. Today, vacationers can rent these basic pine cabins, though there’s always a waiting list; many of the same families have leased
places for so long that the youngest generation might not realize they don’t own them. The star Alabama architects Bobby McAlpine and Bill Ingram have put their imprint on other homes around Martin, building upon the basic Russell aesthetic to recast modern lake-house style with massive windows, long porches, and open floor plans that seamlessly connect indoors and out for easy entertaining. And because Lake Martin’s neighborhoodlike coves often turn into impromptu floating parties, that access gives the lake the feeling of an all-ages summer camp. HOW TO DO IT:
To find your own spot on the water—for a weekend or longer—look for rentals on VRBO or through Lake Martin Realty. At the heart of the Russell Lands community—a network of lakeside neighborhoods that the Alabama family also developed—lies the Crossroads, a sort of rural town common where you can settle in on the Town Green for Friday night concerts or head to Catherine’s Market to pick up weekend provisions like Alabama-milled McEwen & Sons grits, artisan cheeses, and wine. At SpringHouse, chef Rob McDaniel produces some of the region’s most innovative fare out of his wood-fired oven, such as red snapper head cheese and hickory-grilled scamp. Arrive by boat, call up to the lodge-style restaurant, and a golf cart will ferry you directly to your hilltop reservation. If you’d rather not change out of your swimsuit, pull into a slip at Kowaliga for burgers, smoked wings, po’boys, and a taste of Alabama on a plate: Conecuh sausage, Wickles pickles, and pimento cheese with saltines. If the name sounds familiar, it’s because Hank Williams, while staying on Lake Martin, cowrote a hit song about Kowaliga, a large carved “wooden Indian” that was on display at a local Pontiac dealership—a version of the sculpture stands at the restaurant. The red snapper at SpringHouse.

In downtown Alexander City, about fifteen minutes from the water by car, there’s a Main Street revival. Stop into the Taco Bar at Coffee Corner for guajillo and ancho chile–marinated tacos al pastor from Veracruz, Mexico–born Antonio Blanco. Or pop into Ocie & Belle’s for a Greyhound made with freshly squeezed grapefruit juice and local honey at the twenty-four-foot pine bar. On Saturdays, motor by boat to Peanut Point for hot boiled peanuts sold right on the water’s edge. To find it, look for a small cut-through on the west side of Woods Island (or ask the folks at Bay Pines Marina for directions), and beach your craft on the bank. A quart-size bag will set you back just four dollars.

At the base of Chimney Rock, where the water is more than 150 feet deep, boats float side by side, music blaring, while daredevils scale the adjacent Acapulco Rock to somersault from its sixty-foot face into the water. If there’s sun, there’s a party. A couple of miles south, anchor at Goat Island, named for the herd of ruminants it shelters. No one quite knows how they got there, but for decades families have fed the bearded band. Time your day to arrive on the Dadeville side of the lake for sunrise or sunset. There, you can climb the Smith Mountain Fire Tower, a lookout dating to 1939 that stands sentinel 780 feet over the lake (yes, it has safety rails). And if you plan to celebrate July Fourth around these parts, bring picnic blankets and lawn chairs for a concert at the Amp, a venue on the lake’s southwest side, or join the thousands of vessels bobbing in the water for a floating fireworks show beneath the stars. LOCALS KNOW:
Mount a steed for a guided ride along Horsley Creek Trail, a four-mile pine-straw path that winds through wood- lands with lake views. Go by Catherine’s Market beforehand and place a lunch or- der, and the cafe will deliver it to you right on the path for a waterfront picnic under the canopy.