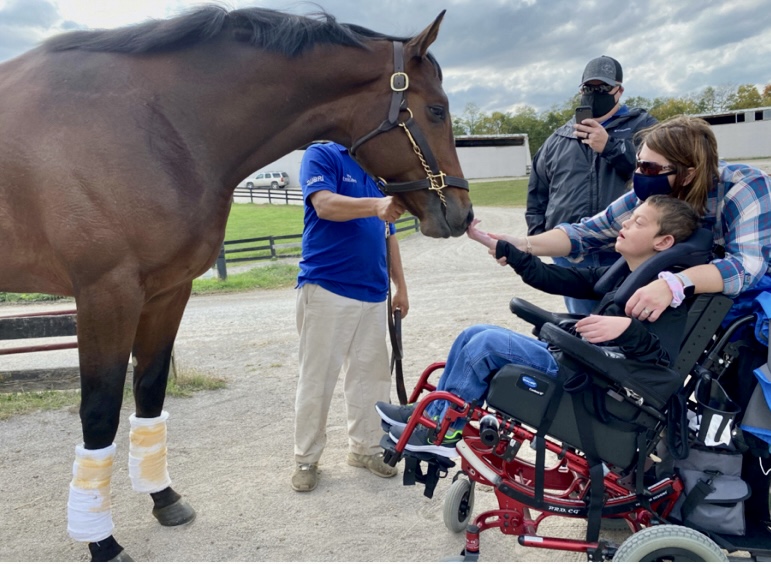 Editor’s Note: On Saturday, Cody’s Wish won the Breeders’ Cup Dirt Mile in a down-to-the-wire race. See Cody and his family react to the special victory in the video at the bottom.

Kelly Dorman remembers well the day his teenage son Cody met the horse that would change his life. The pair, who hail from Lexington, Kentucky, were visiting the state’s Gainsborough Farm in 2018 as part of Keeneland’s Make-A-Wish Day, and Cody was observing Godolphin mares and foals from a distance in the barn. Cody has Wolf-Hirschhorn Syndrome—a rare genetic disorder—and uses a wheelchair, and nobody was certain how the horses would react. “But they brought one horse out, about six months old, and he wouldn’t take no for an answer,” Dorman recalls. “He just kept creeping up, and he put his head in Cody’s lap.” The following year, the farm contacted Cody’s family with some news: They had been so touched by the interaction that they named the horse Cody’s Wish. Today, that foal is a four-year-old poised to run in the Breeders’ Cup at Keeneland this weekend—and Cody will be there to watch.

Since that first meeting, the Lexington teen’s bond with the horse has only intensified. When Cody went through a rough patch during the pandemic, his parents contacted the farm to see if they could arrange a visit to boost his spirits. “It was only the second time they’d met, so we didn’t know if that connection would still be there,” Dorman says. “But as soon as they brought the horse out of the barn, he didn’t pay any attention to anything around him other than Cody.” As for Cody: “He actually started laughing out loud—he’s only done that a handful of times—and he got over his low point pretty quick. He’s been back in the game ever since.”

To date, Cody has watched his namesake run at Churchill Downs three times, and they even shared birthday cake together at one of the barns behind the track. If the family can’t attend a race in person, they watch it on television. “My wife and Cody’s sister and I are all screaming our heads off, but Cody is always serious, with his game face on,” Dorman says. Before the Forego Stakes at Saratoga Race Course at the end of August, Cody, who writes with difficulty, penned his namesake a good-luck sign. The trainer showed Cody’s Wish a picture of Cody holding up the sign before the race, and the horse went on to pull an upset victory over Jackie’s Warrior, ensuring him a spot at the Breeders’ Cup.

A few weeks ago and much to Cody’s excitement, the Dorman family received a special invitation from Breeders’ Cup CEO Drew Fleming to attend the race in person. “Our entire team at Breeders’ Cup has been moved by Cody’s strength and resilience,” Fleming says. “Racing is at its best when we can witness not only incredible performances on the track, but also experience how our sport and our horses can inspire hope and bring people together well beyond the track.”

Dorman sees one key similarity between his son and the horse: “Cody has battled a lot of things—sickness, surgeries, seizures. But there’s no quit in him,” he says. “And there’s no quit in Cody’s Wish either. That’s one trait they share.”

As for the outcome of Saturday’s race, Cody is waiting to make his prediction; he usually tells his parents the night before or the morning of a race how he thinks Cody’s Wish will finish, and he hasn’t been wrong yet on predicting a win. If a victory is in the cards, Dorman will view it as icing on the cake. “This horse has done more for Cody and for our family than we could have ever asked by just stepping out on the track,” he says. “We’ve already had the ride of a lifetime.”