“Sailgating” on the Tennessee River

Tie up your boat with the University of Tennessee’s Vol Navy, where everyone’s welcome and the party lasts all season long The Vol Navy before the Tennessee-Alabama game on October 15, 2016.

Football in the South has all kinds of special traditions—from the clanging cowbells at Mississippi State to the Midnight Yell at Texas A&M. But no matter what team you pull for, everybody can agree that the University of Tennessee’s Vol Navy is pretty darn cool. Neyland Stadium, on the banks of the Tennessee River in Knoxville, is one of only three college stadiums in the U.S. fans can travel to by boat. The river is part of the Tennessee Valley Authority system and it stretches 652 miles across four states before it meets the Ohio River in Paducah, Kentucky. Which means Volunteers could conceivably set out for gameday from New Orleans—or points beyond. The Navy first set sail in 1962, when the late University of Tennessee broadcaster George Mooney became fed up with driving to and from Neyland Stadium in gameday traffic, and took to the water instead, tying his ski boat to a tree on the Tennessee River. It wasn’t long before other Vol fans realized Mooney was on to something, and more and more boats docked alongside him. Now, two to four hundred vessels can be found secured to city-owned docks along the Tennessee on any given fall Saturday.

Although joining the fleet is completely free and no reservation is required, the Vol Navy Boater’s Association, which formed in 2002, asks that large boats moor up to the dock first, and smaller boats tie up to them. “There might be thirty boats lined up in one row,” says Justin Wilson, a diehard Tennessee fan who launched the official Navy Facebook group and TheVolNavy.com.

It isn’t difficult protocol to follow, as most large boats start camping out on Monday or Tuesday. Some people will dock their boat for the entire season, like Greg Boles, whose massive orange-and-white houseboat-turned-floating-sports-bar sits moored by the stadium from August through November. Anything from a yacht to a paddleboard is welcome to tie on, and anyone, no matter the color of their pom-poms, is invited to join.

“When Alabama plays us at home, they bring their boats up,” Wilson says. It takes about three days for Tide fans to reach Knoxville by water. “One of their boats is a huge houseboat that sleeps about sixteen people,” he says. With a master brewer and members of a band on board, the kegs flow and the music plays the entire time, and the Vol Navy welcomes them with open arms. “I’ve never really seen any argument there,” Wilson says. “In fact, I’ve never really seen anyone be upset at all.” 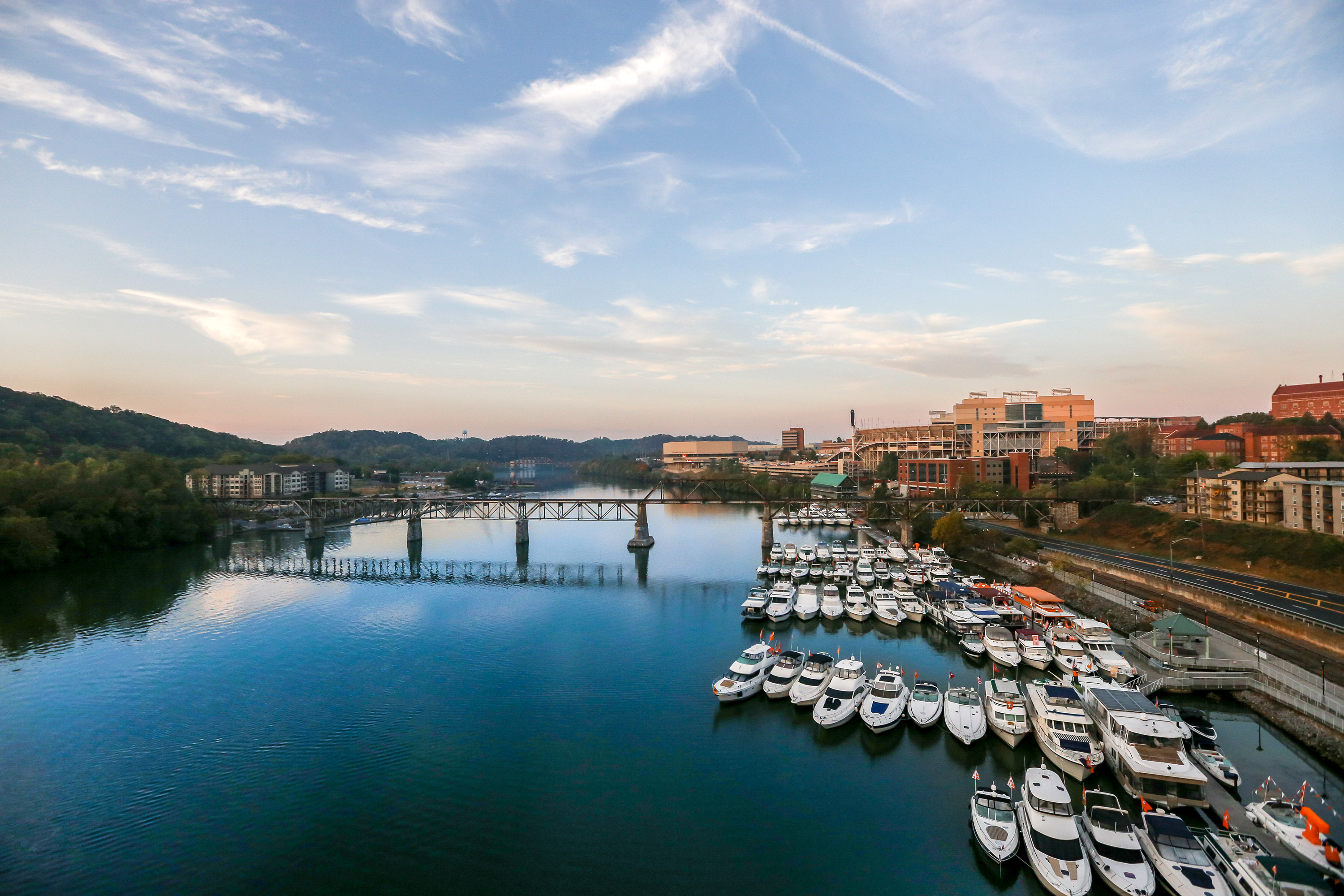 Calm before a gameday storm.

For Wilson and many of the other boaters, the community is as important as the football. “It’s family style,” Wilson says. “Everyone knows each other.” When boats are docked throughout the week, someone will post a picture to the Navy’s Facebook page, showing everyone how much room is left and that the boats are well taken care of. The Navy’s boater association’s website makes that philosophy clear: “If the boat [on the dock] is unattended, simply tie up to them,” it reads. “No one will mind, and you will make great friends.”

On Friday nights when the Vols are at home, a huge party breaks out on the boat decks. “I’d say about half the people don’t even make it to the game,” Wilson laughs. “But if we win, it’s a good Saturday night, too.”