Go Between the Hedges The famous hedges of Sanford Stadium get a trim.

Sports in the South are inextricably linked to vegetation: think Augusta and its azaleas; Louisville and its roses; and Athens, Georgia, and its Ligustrum sinense, Chinese privet.

The University of Georgia’s hedges, originally planted in 1929, have been dubbed “the most famous flora in football.” And while a 5,000-square-foot rectangle that can be seen via satellite might seem a fairly permanent symbol of strength and durability, the hedges have been completely removed from Sanford Stadium not once, but twice in their eighty-nine-year history.

Late last year, the plants were dug up to make way for a new locker room and scoreboard in the west end zone. “We took out [the hedges] and tagged them with the corresponding sideline and then numbered them down the line, so they’d go right back where they came from,” says Matt Hollan, UGA’s director of athletic turf and grounds. The plants were transferred off-site to three undisclosed locations, then replanted ten days before the G-Day scrimmage in April. “We had to trim a third of the foliage when we put them back,” Hollan says, “but we only lost two or three plants out of three hundred that had been removed.” In 1994, during the run-up to the 1996 Olympic Games in Atlanta, UGA had to get creative or else lose them entirely.

Billy Payne, president and CEO of the Atlanta Committee for the Olympics, approached UGA facilities managers about the possibility of using Sanford Stadium as the Games’ soccer venue. “Our first question was: Well, how big is a soccer field?” recalls Ray McEwan, former UGA Athletic Facility supervisor. “In those days, no one knew much at all about soccer.”

Because a soccer field is 25 percent larger than a football field, the hedges and a concrete path had to be removed. Around this time, groundskeepers also discovered that the hedges were slowly dying of a parasitic nematode. Two years before the Olympics, UGA’s facility management team removed 2,100 healthy clippings, divided them in half, and sent them to be propagated at two then-undisclosed locations, now known to be Dudley Nursery in Thomson, Georgia, and Hackney Nursery in Quincy, Florida, both run by alumni. When the hedges were replanted immediately following the Games in 1996, groundskeepers placed shrubs edge to edge every two feet on either side of a low chain-link fence. “Privet spreads just like a weed, so it grew around the fence quickly,” McEwan says. “Within a week, you couldn’t tell the hedges had ever been moved.” 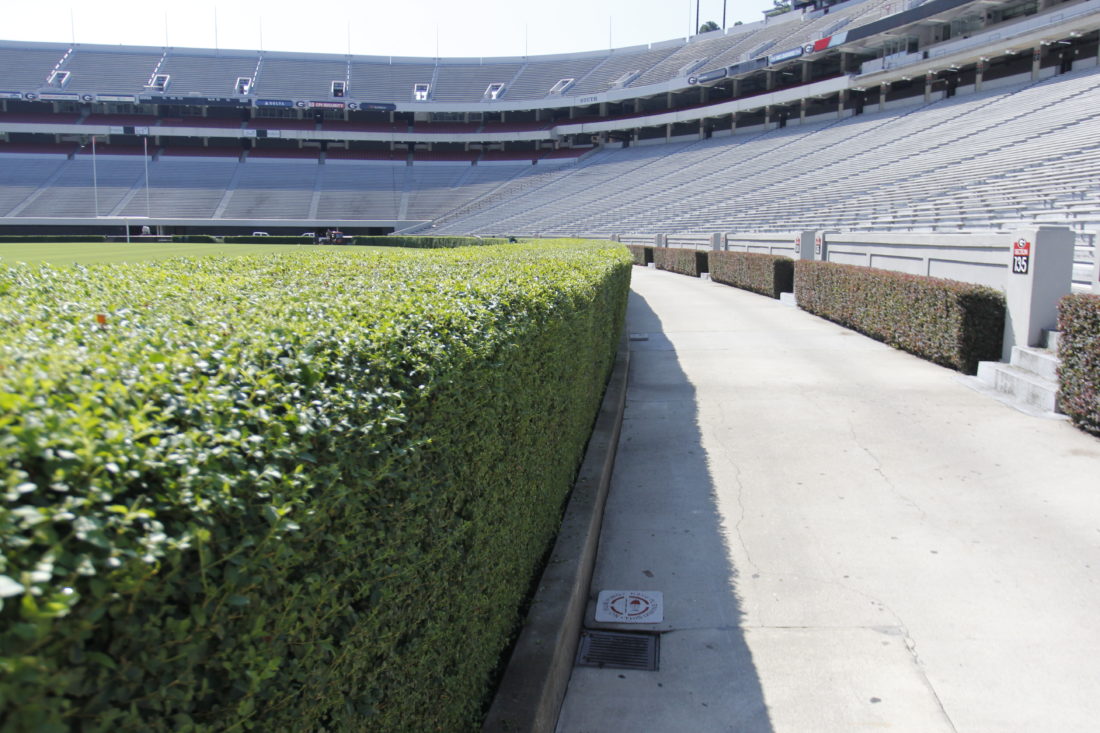 The hedges and the stands.

Unfortunately, symbolic flora can often fall victim to rivalries. Just ask Auburn University, which has had to replace its beloved live oaks twice after acts of vandalism. Georgia’s hedges have fared better, but have still seen their fair share of abuse, both accidental and intentional. “The last game of the season is always the [Georgia] Tech game,” McEwan says. “They sometimes take handfuls of the hedge if they beat us, but it doesn’t do much [damage] because the hedge grows so quickly.”

Hardiness: it’s a useful quality for a plant. And as the Dawgs bask in their return to national prominence, it’s a good quality for a football team, too.