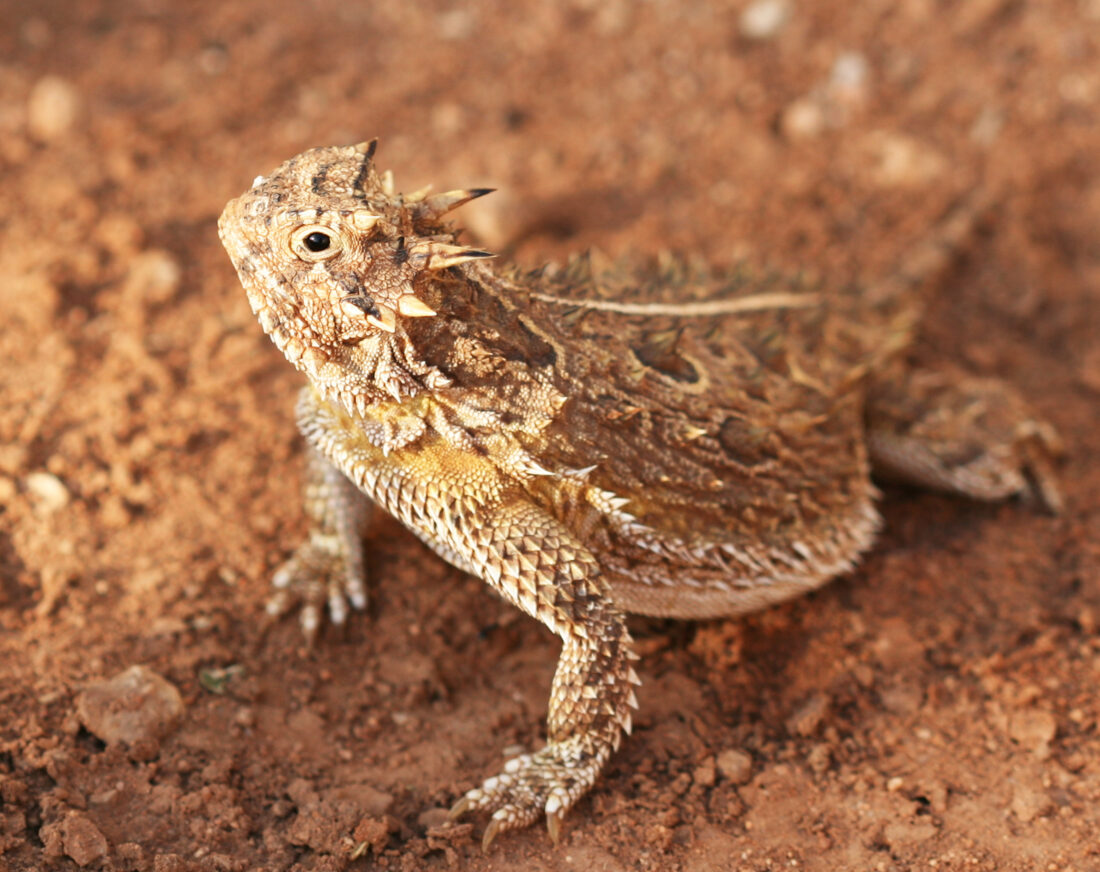 The first thing to know about the horned frog, the mascot of Texas Christian University, is that it’s not a frog, or even an amphibian. “They look like souped-up toads, but they are actually lizards,” says Diane Barber, the project coordinator of the Texas horned lizard program at the Fort Worth Zoo. TCU isn’t alone in perpetuating the misnomer; Texans often call the stocky, blunt-snouted reptiles horny toads or horntoads. And though real horned lizards at the zoo will happily sleep through the National Championship game between TCU and the Georgia Bulldogs on Monday (they’re in hibernation), SuperFrog will represent their fearsome traits in Inglewood.

Horned lizards have flattened bodies, stubby tails, and spiky little horns behind their heads. They are perfectly camouflaged for their arid habitat, and they have the charming ability to shoot blood out of their eye sockets as a defense mechanism against any predators who come sniffing around. Once, they roamed the state of Texas and other parts of the Southwest and Mexico in great abundance. Such abundance, in fact, that legend has it there was a swarm of them on the football field when the sport started at TCU in 1896. That inspired their adoption as the name of the yearbook and as the school mascot around that time; there are Horned Frog yearbooks dating back to 1905 in the library collection.

On campus, other homages to the reptile abound. A metal horned frog statue presides over passersby between Reed and Sadler halls; a rub on its nose bestows luck on test takers. An eight-foot rendition installed in 2013 guards the entrance to Amon G. Carter Stadium. The “Go Frogs” sign of the TCU faithful—made like a peace sign, but with curled fingers—symbolizes the lizard’s horns. And SuperFrog the mascot might not win any beauty contests, but he certainly stands out in a crowd.

In the wild, horned lizards face an uphill battle. The threatened reptiles have suffered population hits due to habitat loss, invasive fire ants, and pesticide use over the past decades, but TCU and a host of partners are working to bring them back. The Fort Worth Zoo runs a captive breeding program that produces hundreds of horned lizard eggs the size of Tic Tacs each fall. After hatching, the babies, which fit on a pinky finger, are introduced into Mason Mountain Wildlife Management Area a few hours southwest of Fort Worth. Once released, they live and grow in the preserve, and TCU students help study them and track their performance. “We’re figuring out the recipe of how to establish a population, and in the future, we’ll expand and introduce at other sites,” Barber says. “They’re little tanks and they are capable of adapting.”

Speaking of adaptations, that shooting blood out of the eye thing? That’s an adaptation biologists think is specifically aimed at warding off canines. Look out, Bulldogs.