A slab of charcoal ribs and sides at Rendezvous.

It’s hard to explain why I love Memphis so much. The traffic can be horrendous, the weather’s muggy, and racial mistrust often hangs heavily on the air. And I have to admit, parts of town are rough on the eye. Out East, there’s a thoughtless sprawl that goes on forever—a Redlobstered, Olivegardened, La Quintasized land where not very long ago there was nothing but cotton fields. When you survey the Bluff City’s history, you see much heartache. Yellow fever epidemics, race riots, riverboat disasters, and that seismic event that still shapes the city’s sense of itself, the flash point by which any understanding of Memphis must be gauged: the MLK assassination. One of the Memphis Queen fleet in port.

Still, I love the place. I love Memphis, I guess you could say, in the way that you love a brother even if he does sometimes puzzle and sadden and frustrate you. Say what you want about it, it’s an authentic place. I was born and raised in Memphis, and no matter where I go, Memphis belongs to me, and I to it.

I love the way that wherever you are in Memphis, you hear the dirge of trains. I love the way in winter, the dead magnolia leaves, having lost their sheen, tumble and clatter in the wind. I love the tang of pit-house smoke, but that’s kind of obvious, and the sound of blues that seems to ooze from the city’s every pore, but that’s obvious, too. I love the rambling old houses in Central Gardens when the azaleas are in garish bloom, and the offbeat energy lately emanating from new-old haunts like Cooper-Young, the recently revitalized Overton Square, and the cavernous 1920s-era Sears Crosstown Building, now being radically repurposed as a “mixed-use urban village.”

I love the downtown skyline at night, as seen from Arkansas, with the old deco-Gothic towers silhouetted against the sweltering night, and the thirty-two-story glass and steel pyramid anchoring the north end. (Originally built as a sports arena in a shape meant to evoke the original Memphis on the Nile, the massive pyramid is set to reopen this spring as the mother of all Bubba tabernacles—a Bass Pro superstore.) And I love the way the Mississippi River looks beside the city, with the big steel bridge whose upper structure forms a mighty M over that great torrent of gravy, all brown snarls and snags and whirlpools, that river that is our river, the river—strongest, widest, swiftest.

A few years ago, with a few friends, I swam across the Mississippi River just above Memphis. I’d been told all my life never to go into that foul water. It was our nation’s large intestine, an unsavory sewage ditch swirling with every category of peril. But in some weird way, crossing the Mississippi was exactly the thing I had to do, some phase or stage I had to go through, like exchanging gills for lungs. People from Memphis are known as Memphians, and that seems somehow right. Shades of amphibian, rubbery beings of the water and mud, life-forms that start out as one thing but morph into something else. We came from the river and to the river we shall return. The thing about Memphis is that it’s pleasingly off-kilter. It’s a great big wack job of a city. The anti-Atlanta. You go there and you can’t believe the things people will say, the way they think, the wobbling orbits of their lives. There’s an essential otherness. When you look at an image by William Eggleston, a Memphian and one of history’s greatest fine-art photographers, you get a sense of what I’m talking about: warped perspectives, angles that make you question your assumptions. Looming tricycles, screaming neon, beehive hairdos spun into high art. “I am at war with the obvious,” Eggleston has said. (Plans are now under way to build a museum to Eggleston’s life and works in the heart of Overton Park.) Or if you had hung out with the late Civil War historian Shelby Foote, another Memphian, and the first writer I ever met, you’d have caught a glimpse of the same thing. Here was a man of meticulously cultivated crotchets. He demanded Pet Evaporated Milk in his coffee. He was an avid watcher of As the World Turns. He spoke in a terrific accent, full of custardy lilts and Delta diphthongs, and wrote with antique writing implements in a cryptic hand all his own. His great salt-and-pepper masterpiece of a beard flexed when he smiled. For twenty years, he worked in a musty grotto-like study in the rear of his house on East Parkway, scratching away at his American Iliad, five hundred words every day for nearly twenty years, until he reached Appomattox. “Ah spec Ah’m bout thru now,” he said, and the trilogy was done. She's Got the Beat

A patron at Paula & Raiford's Disco keeps time on the always-packed dance floor.

Memphis produces these people. It’s like a factory for original souls. And those it does not produce, it pulls into its voracious tractor beam. Musicians, especially: Rufus Thomas, Johnny Cash, Jerry Lee Lewis, Isaac Hayes, Roy Orbison, Al Green. Skinny Elvis, and Fat Elvis, too. If you want to get a more vivid sense of this astounding progression of Memphis archetypes, its fantastical but lesser-known progeny, check out Robert Gordon’s strange and amazing It Came from Memphis. As you’ll see, this tendency—this askew-ness, this askance-itude—runs deep.

It’s always been that way. For two hundred years, all the pathos and pain of the Mississippi River, all the eccentricity and excess, seemed to splash upon the city’s musky cobblestones. Steeped in the mean dreams of cotton, it was a place that celebrated a touch of insanity: high rollers, riverboat captains, mountebanks, snake oil salesmen, redneck wizards, roisterers, wrestlers, cotton brokers, Pentecostal preachers, inventors hopped up on some invisible vapor, some indigenous psycho-vibe, that could be sensed but whose existence could be neither measured nor proved. John Hiatt captured it just right in “Memphis in the Meantime,” when he sang:

Maybe there’s nothin’ happenin’ there
Maybe there’s somethin’ in the air
Before our upper lips get stiff
Maybe we need us a big ol’ whiff. 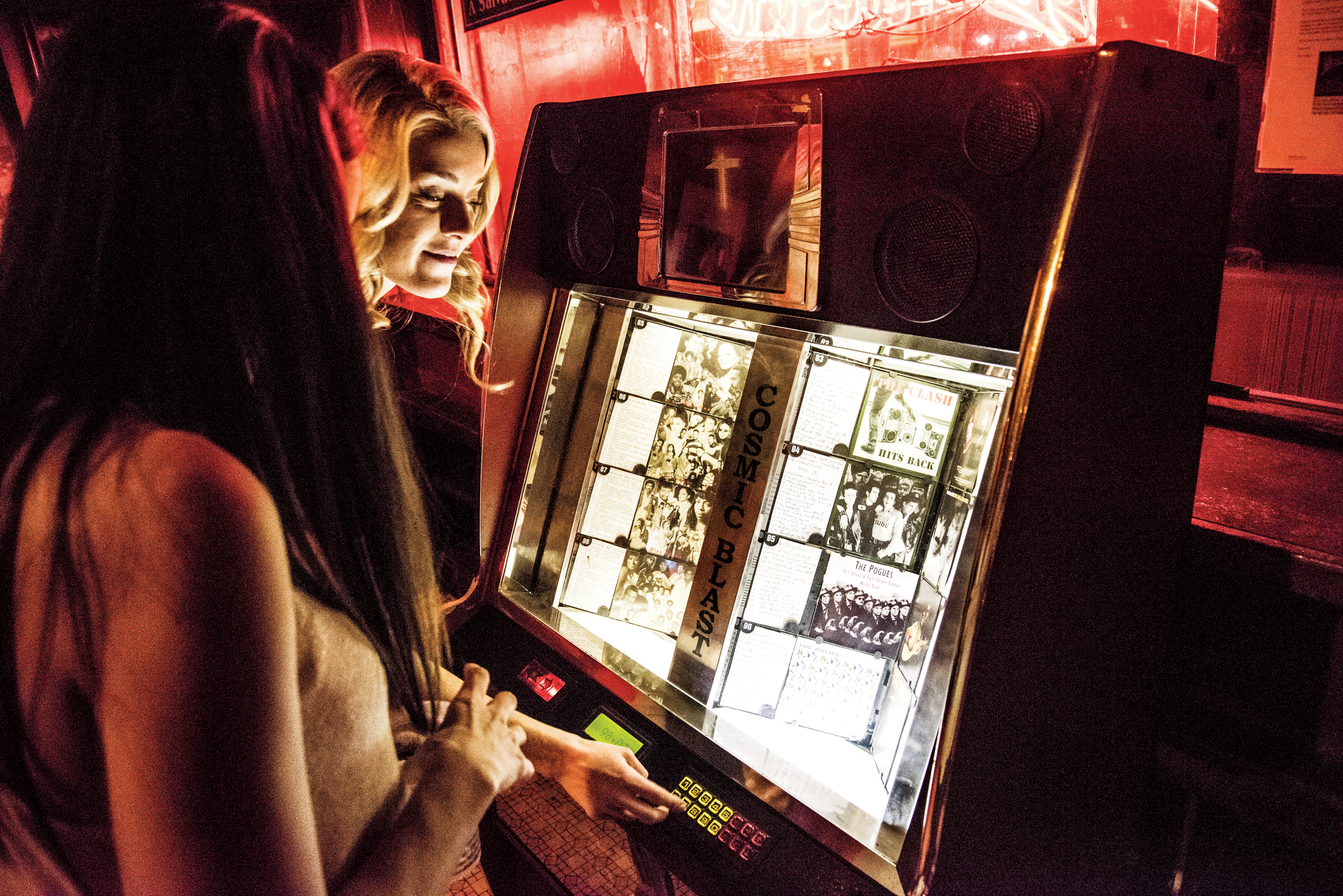 The fully loaded jukebox at Earnestine and Hazel's.

It’s a city of dreams and dreamers, many of them failed ones, but not always. A guy comes along and says, Let’s take black music and white music and put ’em together. You’re crazy, they say, and so Sam Phillips goes and does it. Genius. A guy comes along and says, Let’s buy a fleet of airplanes and create a service that delivers packages overnight to anywhere in the world. Insane, they say, so Fred Smith goes and does it. Absolutely positively. A quixotic young doctor moves to Memphis in the early sixties with the idea of curing a nearly always fatal disease—childhood leukemia—and soon a research hospital opens in the slums north of downtown, named for the patron saint of lost causes. The breakthroughs that Dr. Donald Pinkel and his staff chart soon put St. Jude’s on the world map as a place that attempts the impossible. Today the survival rate for most forms of childhood leukemia is more than 90 percent.

Dreamers from the outside arrive hoping to imbibe some of the magic vapor, to capture it and take it home. Dusty Springfield wanted some of it when she came all the way from England in 1968 to record her now classic album. Jim Jarmusch wanted it too, when he made his weirdly great film Mystery Train. The Elvis pilgrims head for the Jungle Room at Graceland, while other kinds of pilgrims head for the Lorraine Motel (now the National Civil Rights Museum, which has just undergone a multimillion-dollar renovation). People come to linger on the balcony where MLK spent his last moments, to study the angles of fate, to try to discern what broader plots might have been gathering in the shadows. I may not get there with you, but…we, as a people, will get to the Promised Land! This thing about Memphis: Is there really a there there, or just a belief in the thereness? If It came from Memphis, what is the It? I can’t precisely say, and I’m afraid if I delved any deeper, it would kill the very thing itself. That’s how fragile it is. Like a frog on dry land, it can’t stand too much direct light or desiccating heat. Like some of Eggleston’s photos, it’s unanalyzable. You can’t define it or bottle it. You can’t explain or parse it. You just have to go there and get a whiff for yourself.