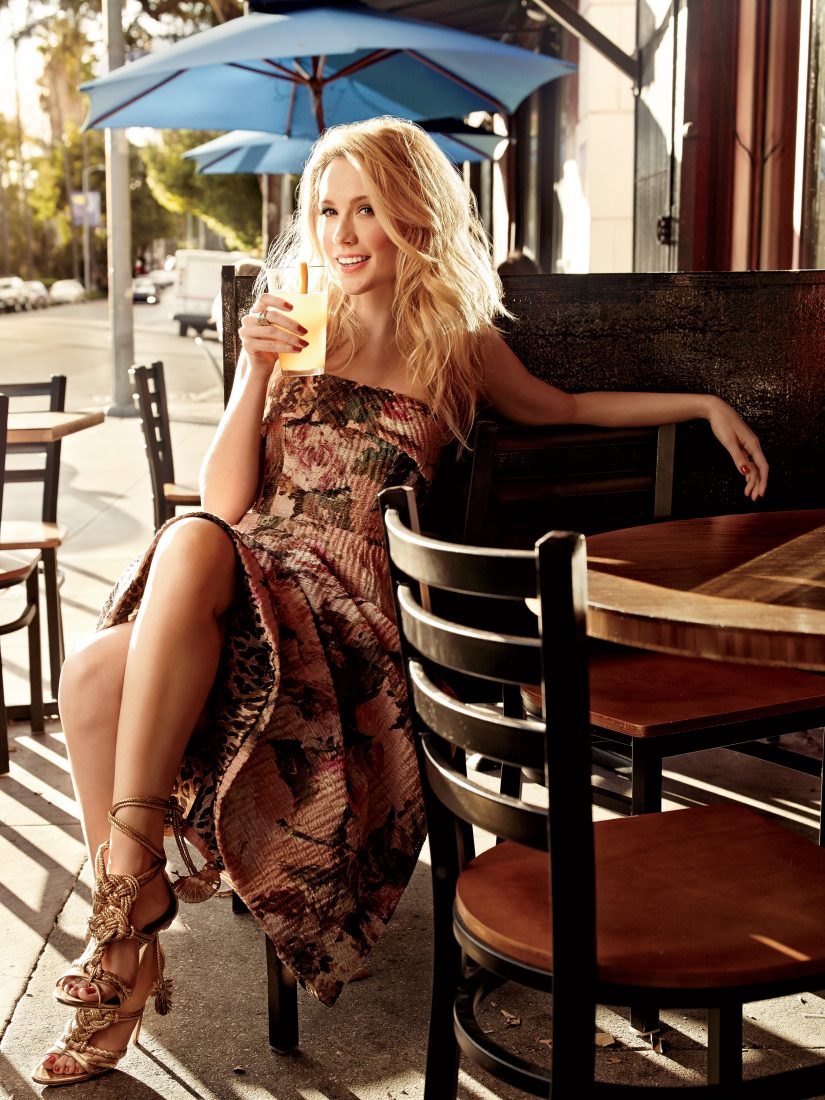 Camp outside of Birds Café, in Hollywood, one of her go-to-fried chicken joints, on February 3, 2014.

The talented Anna Camp has taken on all comers in her still-young career. After graduating from the University of North Carolina School of the Arts, the thirty-one-year-old Aiken, South Carolina, native moved to New York City, where she took Broadway by storm with her brave performance in Equus. Since then she’s had recurring parts in some of the biggest shows on television, from Mad Men to The Good Wife to The Mindy Project, and traded in her Manhattan apartment for an address in L.A., where her big-screen career has taken off. Propelled by supporting roles in The Help, Pitch Perfect, and (it’s rumored) next year’s Pitch Perfect 2, this Southern ingenue proves that her career is right on key.

Walk us through your first acting job.
It was in second grade, at Meadowfield Elementary School in Columbia, South Carolina, in one of those “dare to keep kids off drugs” plays. I was in a group of kids who were supposed to be pressuring other kids to buy drugs. So, yes, I played a drug dealer in the second grade.

Your alma mater has produced some  pretty big stars over the years—from Debbie Allen to Danny McBride. Is there a strong alumni network in Hollywood?
Yeah, there is. It’s awesome. I just shot a movie that we are hoping to get into the Tribeca Film Festival, Goodbye to All That, directed by Angus MacLachlan [Junebug], who went to the school. Paul Schneider is an alum, too, and he’s in it. And we shot it right there in Winston-Salem.

Many of the characters you play are  overachievers. Are you a perfectionist  in real life?
I think at my core I’m a perfectionist. But I’ve learned over the years to not hold on too tightly and to ease up on myself if I’m not perfect. When I was younger, in college and in New York City, I definitely studied really hard and overprepared for auditions. Now I realize that you do better work when you can let go more.

In one of your bios, you’re listed as a “rapper.”
I used to have a little rap thing going on. I did an open-mic night once in New York. But I don’t really do it anymore. I sort of did it during a past relationship. I’ve dropped the rapping.

You moved to Los Angeles five years ago. Have you found any good Southern food joints?
I’m a big fan of Roscoe’s House of Chicken and Waffles. And Sassafras in Hollywood has really great Southern cocktails. There’s a crew of Southerners out here. It’s always nice when I hear that accent. When I have a glass of wine, mine starts to slip out, too.

Is there one acting role that you’ve always wanted to play but haven’t yet?
I want to play Blanche DuBois when I get to be the right age. I love Tennessee Williams. I hope I can do it on Broadway. It’s so Southern. It’s such a dream role.

If you weren’t an actor, what would you be?
I’d probably be working with dogs, like breeding them. I love dogs so much. I have a puggle named Rocky. He’s an actor. There’s a mini-film about him on YouTube where he plays two parts.

What’s up next for you?
I have a part in the final season of True Blood. And I’m working on a pitch right now, a dark comedy, to take to HBO. I’m attached to a couple of movies that are waiting on financing. One of them is When We First Met, a tragic coming-of-age love story set in Berlin. And Pitch Perfect 2 is being made and it’s rumored that the whole cast is returning.

Since you’ve been in Hollywood, do you think the perception of the South has changed?
There are definitely a lot of Southern-themed shows now, with True Blood and True Detective and movies like Dallas Buyers Club. I think there’s something appealing and romantic about the South, and you don’t have to be from the South to be interested in that. I like to think the South is pretty cool.