Florida Southern College regularly appears on lists of America’s most beautiful campuses, which is no surprise to anyone familiar with the school’s history. Although established in 1883, a portion of the campus was built in the mid-twentieth century, when the Lakeland, Florida institution benefited from one of America’s greatest visionaries: Frank Lloyd Wright. In 1938, the college’s president, Ludd Spivey, needed to reinvigorate the school, and reached out to the architect to see if he would be interested in designing an expansion for the campus. It was Wright’s first opportunity to build a community totally comprised of his own architecture, and he jumped at the chance.

“It was during the Depression, so Dr. Spivey and the school had very limited funds,” says Jeff Baker, partner at Mesick, Cohen, Wilson, Baker, the architecture firm now tasked with preserving and maintaining Florida Southern’s Wright buildings. “And at the same time, a lot of students didn’t have the funds to go to college.” Wright and Spivey found a simple solution: students would work their way through school building Wright’s designs. When WWII broke out and many men enlisted, female students took over the construction. Students and contractors erected twelve buildings between 1938 and Wright’s death and Spivey’s resignation in the late 1950s, which effectively halted the project. Baker’s firm added the Usonian House in 2013, a faculty residence Wright had designed in the thirties, but the university had never built. “Since most of Wright’s buildings were houses, building this taught us so much about the way he designed,” Baker says. Annie Pfeiffer Chapel, 1941. The first Wright building to be constructed on campus, the chapel exhibits many of his trademark architectural elements. Notably, the cantilevered wings give the impression the building is floating above the ground. The tower of the Annie Pfeiffer Chapel, 1941. A figurative rendering of the “bow tie” design in the chapel’s tower is used as the college’s trademark symbol. Esplanades, 1941-58. These covered walkways, more than a mile in total length, connect the buildings in a geometric pattern. The supports are said to suggest orange trees. The esplanades are trimmed in copper, which Wright used for its natural green patina. Three Seminar Buildings, 1941. During the war years, students built these first Wright designs: the Carter, Walbridge, and Hawkins Seminar Buildings. Originally, they were separate buildings with a courtyard in between and housed classrooms and the president’s office. T. Roux Library, 1945. Now known as the Thad Buckner Building, this was originally the library. Extensively modified after its conversion to an office building, it still has such signature Wright features as clerestory windows and “light wells” that let in sunshine. Watson/Fine Administration Buildings, 1948. These two buildings were the first built by an outside construction firm rather than students, and Wright supervised the construction. The copper trim of the esplanades that connect them is extended into interior ceilings in the Fine Building. The Water Dome, 1948, 2007. The Water Dome was a central point in Wright’s concept of the campus and the largest water feature he ever designed. Symbolizing the fountain of knowledge, it is 160 feet in diameter. The technology to create a dome of water did not exist in 1948, and for years it sat as an open pool. Fully restored in 2007, the Water Dome uses high-pressure nozzles to propel water as high as 45 feet, creating the dome Wright envisioned. It runs at set intervals throughout the day, though, to conserve water, it only operates at full power for special occasions. Ordway Arts Building, 1952. Originally intended as a classroom building and refectory, the Ordway Building was used instead as an industrial arts center and later as a student lounge. The building has two parallel arms with classrooms and offices connected by a courtyard. William H. Danforth Chapel, 1955. This small chapel is the site of Wright’s only work in leaded glass on campus. It is framed in native Florida tidewater red-cypress and still contains the original pews and cushions, designed by Wright and built by industrial arts and home economics classes. Polk County Science Building, 1958. This was the last of Florida Southern’s campus buildings to be constructed during Wright’s lifetime. It contains his first use of aluminum for decorative purposes, and its long, low profile reflects Wright’s organic style. The laboratory ventilators on the roof were not part of the design and were added to comply with safety standards. The Planetarium at the Polk County Science Building, 1958. This is Wright’s only extant planetarium. The Usonian House, 2013. Designed by Wright in 1940 to serve as faculty housing, the Usonian House wasn’t constructed until 2013. This simple yet stunning building, now used as a welcome center, illustrates many of Wright’s ideals for modern American living: distinctly American styling, economy of space, and the use of locally sourced materials. Spring Preening for Every Room

After a long stretch of being at home, it’s time to refeather your nest 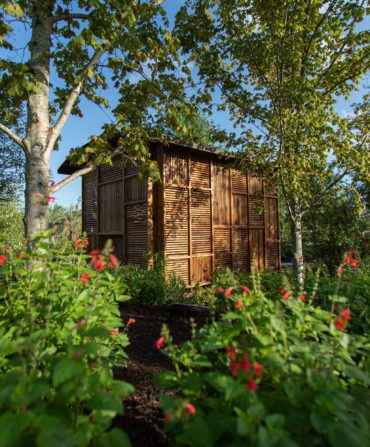 Walk Through the Houston Botanic Garden