Love and Loathing in Fruitcake Land

Why the much-maligned dessert deserves a place on your holiday sweets spread—yes, really. No, really, I’m serious! 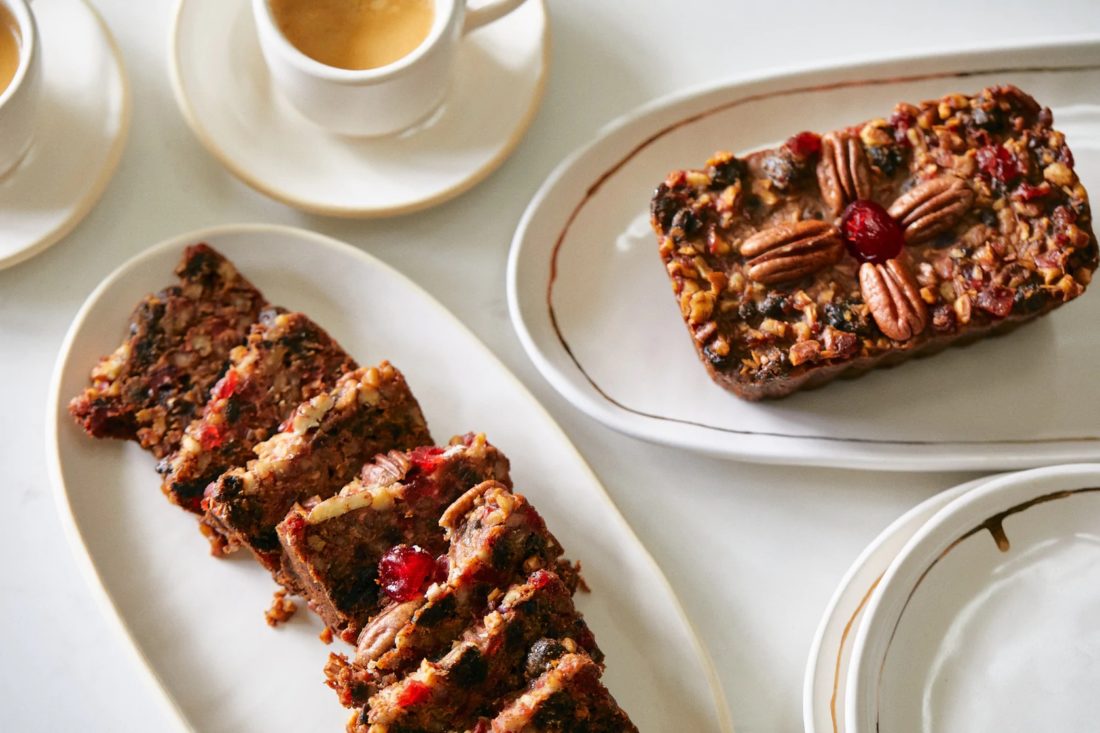 Fruitcake from the Lovely Crumb in Knoxville, Tennessee.

I was standing at my kitchen island when the fruitcake began to take hold. I remember thinking something like, THIS IS SO FRICKIN’ GOOD. And the shock of the thought halted my hand, which was already shoveling another square toward my mouth.

Yes, Virginia, there ARE good fruitcakes!

I won’t go so far as to say the epiphany was near that of the Magi’s, but getting across the profundity of my surprise is worth a flirt with heresy. After all, my previous experiences with fruitcake probably resemble most people’s: blech.

My Grandma Brown kept her fruitcake sealed on her kitchen bar during the holidays in a shiny blue Royal Dansk Danish butter cookie tin, the same kind she also scattered in other rooms of the house to hold loose change and extra buttons. Supernaturally red and green cherry orbs floated in dense, dry, bitter, brown…well, allegedly cake, but who was to say with all the nuts and raisins obscuring the truth? Grandma was a Baptist, too, so you can bet the traditional soak in rum or brandy that would have given it a fighting chance didn’t happen.

From then on, when a fruitcake (or heaven forbid, fruitcake cookies) appeared on a holiday spread, I studiously avoided it. Why waste precious stomach space when there were bourbon balls and five-flavor pound cake and sugar cookies to be had?

My conversion happened slowly. Almost as slowly as my best friend’s father consumes the fruitcake he makes every December, storing it in the refrigerator and slicing off a sliver whenever the hankering hits him, making it last even into the summertime. It began with a Great British Baking Show episode from the second Netflix season in which the judges asked the contestants to bake a classic suet pudding. As the bakers mixed and steamed their moist, luscious puddings filled with generous bits of (naturally colored) figs and apples and plums, I thought, Wait. That looks like fruitcake. Like a fruitcake I would actually eat.

Then, in 2018, I interviewed the late author Dorothea Benton Frank for G&G’s Southern Women book. I had asked Frank to select an object that meant something to her as a Southern woman, and to tell me the story behind it. She picked…her mother’s fruitcake pan.

“My mother was the worst cook—the worst,” she explained to me back then. “If the Department of Health in Charleston, South Carolina, could have, they would have repossessed her stove. But her fruitcake was out of this world.” Frank shared her mother’s recipe in the back of her 2009 novel, The Christmas Pearl; she told me she re-created it annually (but soaked her version in applejack brandy). We talked about the dessert’s bad reputation, my own skepticism. But she assured me, “Heaven smells like my mother’s fruitcake.” I vowed to try the recipe myself, but when Frank died the month before Southern Women came out in 2019, I just didn’t have the heart.

Late this summer, though, signals and signs from the fruitcake gods began to arrive.

In his October/November 2022 travelogue for G&G through Tennessee’s Cumberland Plateau, the author Kevin Wilson mentions the oldest family-owned bakery in the state, Tracy City’s Dutch Maid. Double-checking the name as I read over a proof of the story, I noticed the spot’s Facebook page overflows with sentiments along the lines of, “This is the only fruitcake I’ll eat”; one November post said their goal was to sell a thousand pounds of the stuff this year. Around the same time, we held our Made in the South Awards food judging with Al Roker, and I sampled perhaps the best alcohol-free loaf I’ve ever had, by the Lovely Crumb in Knoxville, Tennessee.

As the fall rolled on, fruitcakes popped up seemingly everywhere I looked. I read the legendary Atlanta dining critic Christiane Lauterbach’s lament about the lack of fruitcakes in the city’s shops. Bill Murray showed up at the famed Claxton Fruit Cake, in Southeast Georgia, to stock up on his stash. G&G contributor Kathleen Purvis wrote a lovely story for Southern Living on the family behind North Carolina’s beloved Southern Supreme fruitcakes. Even Mountain Dew got in on the action with its (also lamentable) Fruit Quake, with the (even more regrettable) tagline, “Celebrate the season with a blast of artificial fruitcake flavor!”

I decided to rope in our G&G faithful. The digital team posed a question for me in our weekly Talk of the South newsletter: “Fruitcake fans (we know you’re out there!): What’s the key to a great fruitcake?” Some readers gave helpful tips. A good soak in booze seemed key: Cognac, rum, amaretto, brandy, Tennessee whiskey, sweet German wine, and, of course, bourbon, all got love. Other responses made me laugh out loud:

“The key to a great fruitcake? DISTANCE THEREFROM.” —Jane A.

“Not receiving one!” —Vince C.

So, you might be thinking, get to it! Which fruitcake changed your mind?

In November, at G&G’s Spirit of Asheville weekend, I finally had the pleasure of meeting Brian Noyes, the owner of Red Truck Bakery in Marshall, Virginia. Over the years, Noyes has shared recipes with the magazine and its readers for all manner of baked goods and sweets, including caramel cake, peanut brittle, and cheese straws. When my boss, editor in chief Dave DiBenedetto, told Noyes I was interested in opening my heart to fruitcake, Noyes had plenty to say. But first, he wanted me to try Red Truck’s Havana Fruitcake.

For years, Noyes says, he had tinkered with his fruitcake recipe, inspired by versions made by the erstwhile La Cuisine cooking store in Alexandria, Virginia. “I followed that recipe for a while,” he says, “adding booze to the ingredients and to a brushing I gave the final cakes several times over a few weeks. I wrapped a half dozen of the cakes for friends and got some helpful comments. One pal gave me a copy of Truman Capote’s ‘A Christmas Memory,’ about Capote’s fruitcake project with his cousin and nanny, whom he called Sook.”

Then, back when Noyes worked as the art director and occasional writer for the Washington Post and Smithsonian, he “wrangled a few trips to Havana on a journalist’s visa,” he says. On one such trip, he booked a dinner at a private paladar, a homegrown restaurant in an apartment licensed by the government. After a memorable six-course dinner, he returned for more meals, and the chef offered to train Noyes on desserts. First up: her tropical fruitcake, with coconut, pineapple, pecans, almonds, and plenty of Havana Club Rum.

He took his in-progress fruitcake recipe and added in some of the aforementioned elements of hers. Now, Red Truck makes hundreds of Havana Fruitcakes each September and then brushes the loaves with dark rum for nearly three months before releasing them the first week of December. “Incredibly, we start getting fruitcake queries in the late spring,” Noyes says, “and we hear time and again that even the fruitcake-averse members of their family love this version.”

That’s my cue. The Havana arrived with seemingly odd instructions: “For best results, slice with a serrated knife while chilled. We keep ours in the freezer and slice it frozen.” Frozen? But I did what I was told. I cut away a cold slice, then diced it into smaller squares. I ate one…then another…and then, what the heck, another and another. The spices tasted of the holidays, with a hint of the tropics; the hunks of fruit and slivers of nuts seemingly melted in the mouth. The rum keeps the cake from hardening too much in the freezer, Noyes says, and the chill helps the slices hang together and the loaf stay even more moist.

This December, when in need of an afternoon treat, I’ve sneaked to the freezer, laid the fruitcake on a wooden cutting board, and gone to town. “Hey,” my husband inevitably pipes up as I am slicing just one more hunk, I swear this is the last one! “Can I have a piece of that?” And that’s how you spread the good news. By sharing.