With “big old eyes and a button for a rattle,” these baby snakes offer hope for a struggling species 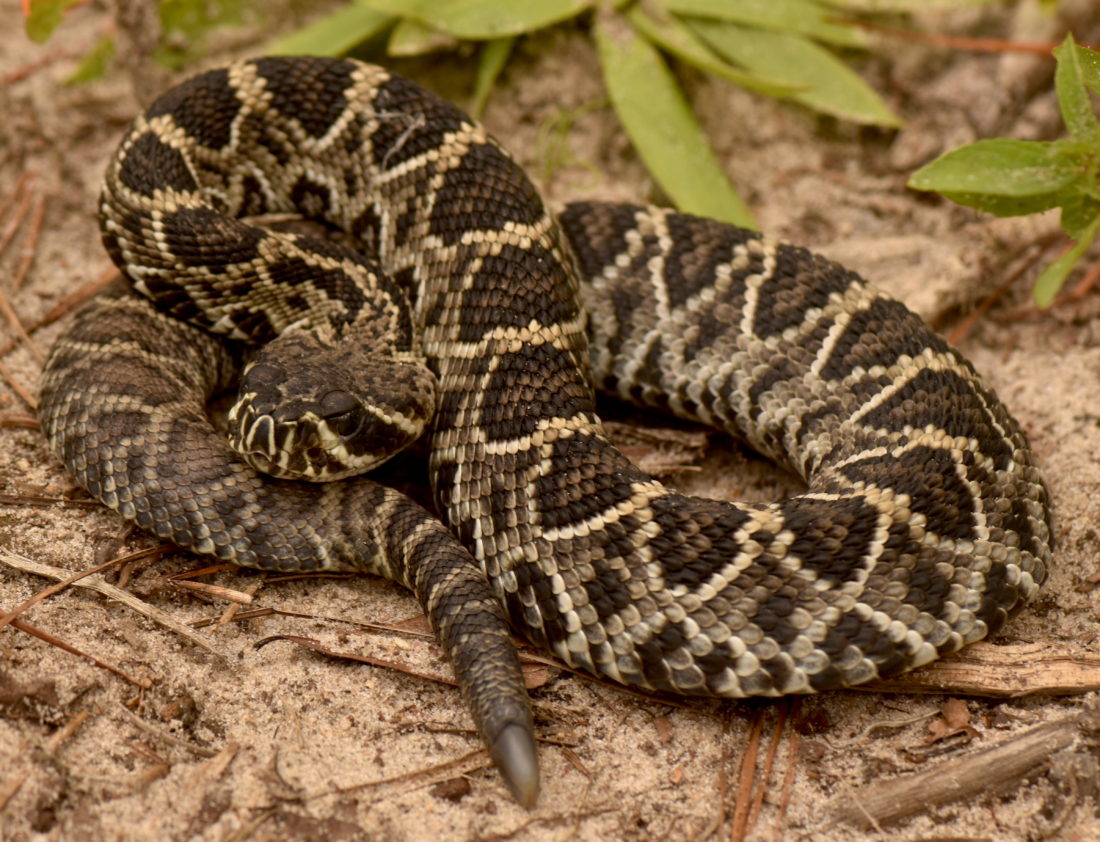 Earlier this fall, my phone buzzed with an exciting photo: a bin full of baby eastern diamondback rattlesnakes. The accompanying text read: “Ruby Jean had a clutch. First one ever from a snake we’ve been tracking.” Last May, I joined the Amphibian and Reptile Conservancy (ARC) team as they tracked eastern diamondbacks—the largest and now rarest rattlesnake in the world, once common across the Southeast—through the pine savannas of South Carolina’s Francis Marion National Forest. Now, Ruby Jean, one of the snakes we visited, has become the mother of more than a dozen slithering babies.

“It was like a military operation; we all had our routes to approach her pine stump,” says ARC’s field manager Ben Morrison, who has been tracking Ruby Jean religiously since mid-August, when he noticed she looked “fat around the hips.” The team has studied these snakes since 2013, trying to piece together how the population is faring and how to conserve them in the face of lost and degraded habitat, and persecution from humans.

After monitoring Ruby Jean for several months, Morrison and three other biologists spotted three neonates (the herpetological term for a newborn snake) outside the hole she had selected. Rattlesnakes are ovoviviparous, meaning the females carry the eggs within them during gestation, and then the babies are born live. In terms of venom, the snakes “come out ready to go,” as Morrison says, though it’s a myth that juveniles are more dangerous than adults. The four biologists present took the usual precautions—snake boots, hooks, and a respectful attitude—to capture the neonates for tagging. “We actually had to steal the transmitters from some nearby spotted turtles we were tracking,” Morrison says with a laugh.

The baby snakes are an exciting find for two main reasons. First, one of the biologists’ primary concerns is that the population has not been regularly reproducing due to a lack of prey, so this offers a measure of hope. Second, there is very little scientific data available on diamondback neonates. “We know next to nothing about the ecology and day-to-day life of young eastern diamondbacks,” says JJ Apodaca, ARC’S executive director. “This litter gives us insight into a secret world, information that will hopefully direct our conservation efforts with these snakes.”

The early weeks and months are dangerous for young diamondbacks—at about a foot long, they’ll need to dodge hawks, king snakes, racers, and other predators. Morrison brought seven neonates into the lab to outfit them with transmitters before releasing them back into the wild. He’s hoping for the best, and he couldn’t help but get a little attached. “They’re perfect miniature versions of the adults, with these big old eyes and a little button for a rattle,” he says. Yes, you might even call them cute. And the babies offer welcome encouragement in a conservation project that often feels like an uphill battle. “Maybe to most people it’s a face only a biologist could love,” Apodaca adds. “But to us, they’re a dose of hope for a struggling species that’s close to our hearts.”

Below, see footage of Morrison releasing the neonates: