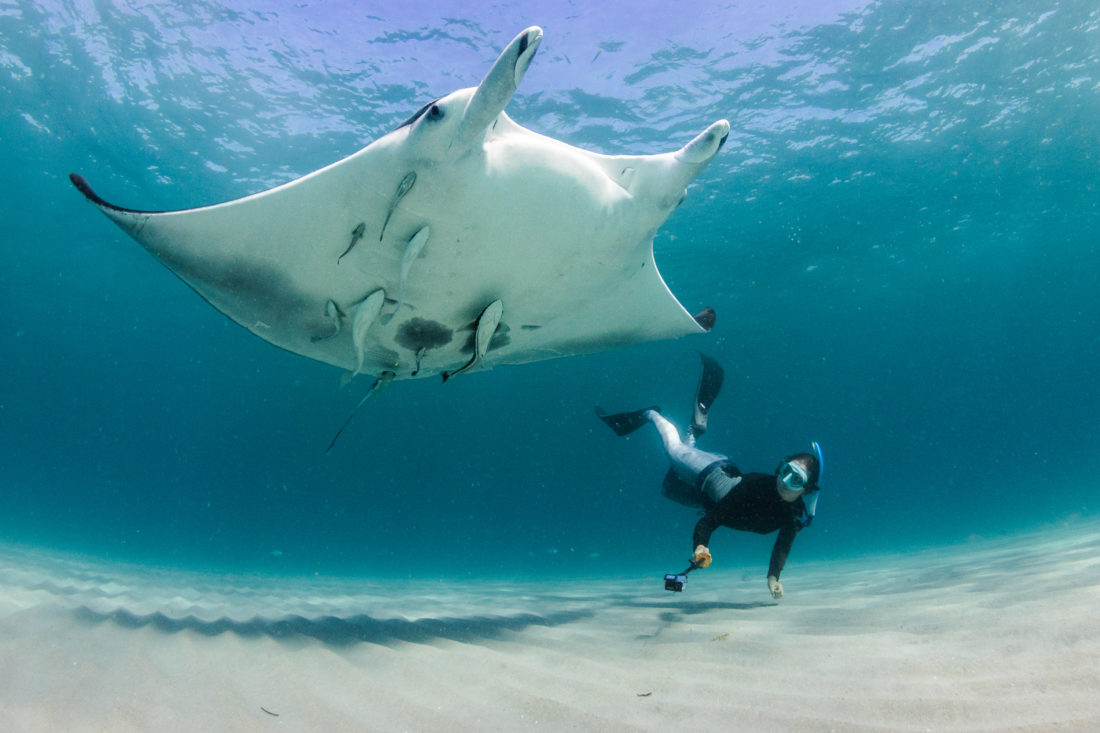 The first time marine biologist Jessica Pate swam with a giant manta ray in 2016, it flipped upside down and swam along underneath her, studying her as much as she was studying it. “From that moment, I was hooked,” she says. “They’re curious. They have personalities.” The huge marine fish—its wingspan can reach more than twenty feet across—is endangered worldwide. And after six years of gathering data, Pate has discovered that South Florida is home to a rare nursery of 125 juveniles. Since female giant manta rays only produce a single, large pup every few years, and the juveniles may spend two or three years growing in these waters, it’s a vital area to protect.

Based near West Palm Beach, Pate works for Marine Megafauna Foundation, a global organization that studies large marine animals, with a focus on whale sharks and manta rays. She leads the Florida project on giant manta rays, which are a mysterious, little studied, and often misunderstood species. They lack the venomous barb on the tail that makes stingrays dangerous. They’re filter feeders, drawing in plankton, and have to continuously swim to keep water moving over their gills so they can breathe. They’re also highly intelligent. Manta rays have the largest brain of any fish, and they’re social and can form long-term bonds with one another. They’re the biggest rays in existence and are found across the world’s oceans, from Indonesia to the Yucatan peninsula to the east coast of the United States (though Pate and other scientists suspect that the giant manta rays in Florida might be a distinct species).

“They’re these big, charismatic creatures that remain overlooked by science,” Pate says. She studies giant manta rays in Florida to figure out how many there are, where they spend their time, what they eat, and how fast they mature, among many other questions. But the most exciting thing she’s turned up is the developmental ground for baby giant mantas in an area off Fort Lauderdale and Miami. “Right off the coast from the condos, among millions of people, we have this rare nursery,” Pate says. She suspects its existence stems from three reasons: The area has enough food that the mantas can grow, it doesn’t have too many predators, and it maintains a warm temperature that’s optimal for development.

Currently, Pate is working to gather more data. She uses drones to locate the young mantas, then boats up alongside them and jumps in, toting a Go-Pro to capture pictures of the unique spot patterns on their bellies and sometimes attaching tags to gather tracking data. “When you get in the water with them, they’ll unroll and roll their fins, and if you maintain eye contact with them, they’ll study you back,” she says. Some are more friendly than others; one, named Nova, seems to enjoy human contact, while others swim away quickly. (“If they don’t want to be near me, there’s nothing I can do about it,” Pate says.)

A major threat to the rays are boat strikes, and Pate sometimes finds them tangled in commercial fishing lines (like whales, they’ll let her untangle them and cut them free). Worldwide, microplastics in the ocean are also a growing problem as they can be the same size as plankton, the rays’ food source.

“I just want people to know that we have these incredibly intelligent animals right off our coasts,” Pate says. “There are not a lot of places in the world where you see exclusively juvenile manta rays. So that makes this place pretty unique.”

Since so little is known about Florida giant manta rays, reports of manta sightings provide critical data to scientists. If you see a manta ray, take a photo and report your sighting to Florida@marinemegafauna.org.