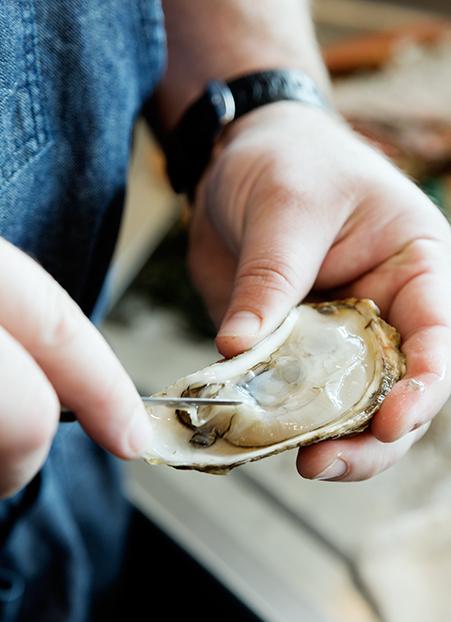 In our Talk of the South newsletter, we recently asked, What’s the correct number of times to chew an oyster? Your answers were delightful. We also reached out to some G&G contributors for their opinions, a few of which we rounded up here with your responses:

Zero! You down it in one sloppy gulp! —Wanda W.

I don’t remember ever chewing an oyster. Some form of oyster-specific mastication occurs, but I would not call it chewing. I’m not sure what to call it. I’m not sure I want to call it anything or think about it any more deeply than I already have. —Daniel Wallace, author

None! You just sort of knock it around with your tongue and let it slide down your throat. (Unless it’s too big and you have to bite it in two.) —Bill Smith, chef and author

A raw oyster is not to be chewed. It is to be slurped and rolled around your mouth gently, cooling and refreshing, and then swallowed whole, leaving a briny taste of the sea. —Nathalie Dupree, chef and author

At least enough to release the brine and essence of such an exquisite beast. Twice or thrice at least, but a honking big Stump Sound single is a chunk of meat I’m in no rush to rush. I might chew my cud for a bit, and I won’t apologize for it. —T. Edward Nickens, author

I don’t like the way thinking about that makes me feel, so I’m gonna say no chewing, just shooting. —Vivian Howard, chef and author

I think most purists will say that you don’t chew oysters. I take a different approach. I am all about biting into an oyster once to get a rush from the flavor. Then I slurp it down. I also don’t want to mask the flavor of an oyster by putting hot sauce, mignonette, etc. over it. I love a squeeze of lemon and that is it. —Kevin Mitchell, chef and author

I personally like to chew my oyster two to three times before swallowing. I feel like you’re able to get a real taste of the oyster and all of its complexities. I also tend to stick with the small varieties of oysters. —Ann Kim, Garden & Gun Club executive chef

I was in the seafood business for years and test-tasted oysters almost every day. I never really thought about how many times I chewed one. I probably chewed it enough to judge how salty it was and its taste. If I’m eating oysters, it would depend on the size of the oyster and the taste. I like to taste the oyster and not the sauce, so I usually eat them without sauce and maybe a little lemon juice. An oyster does not require a lot of chewing.
—Jimbo Meador, G&G contributor

Okay, let’s make clear from the start this question is only intelligible in the South. The West Coast Native Olympia Oyster averages a little over an inch across. The Wellfleet of Massachusetts is two inches. Both are gulpers. No chews needed. The Southern soft lipped oysters grow bigger. Indeed, the famous Brookhaven Oysters at the mouth of the Chesapeake Bay until the end of the nineteenth century were likened to a grown man’s shoe in size. It had to be partitioned with a knife to be consumed. But now when oysters are harvested at two or three years, they can be three inches or more. Two chews’ work. Same for the “Pacific Oyster” imported to the waters of the West Coast in 1912 after the Oly was overharvested. —David S. Shields, culinary historian

Whatever number of times that brings YOU the most pleasure! But it is imperative that you chew it. Just tossing it into your mouth and swallowing it is a complete waste. Chew it, savor it, and be part of a very special culinary experience. —Chester J.

As many times as you want until you hit a pearl. —Joe D.

You don’t chew an oyster. You mash it against the roof of your mouth with your tongue, multiple times, exploding the juices, savoring the flavors of the region where the oyster was raised. —Dougal K.

Depends on the size of the cracker. —Deborah L.

The correct number of times to chew an oyster is a half of a chew. Just enough to crack the flesh of the oyster to get the full flavor of its origin. That’s all. —Dennis M.

Well, really large oysters are called “two-biters,” so the answer for them would be two. By deduction, regular sized oysters could be done with one bite, but my preference is to slurp them down unbitten. After all, just as lobster serves only as a vehicle to consume melted butter, oysters are really vehicles to consume red seafood sauce. —James H.

My wife says she doesn’t eat anything in the booger family. I, on the other hand, love them any way they are fixed. And I really don’t think you need to chew it more than once, just to release the juices! —Lyndon and Honey F.

If it’s raw, the answer is zero. Just let it slide down! —Jim L.

First I slurp it, with all its salty, sweet juices. Then, depending on size, maybe a quick one-two chew to release the inner nirvana. Then swish and swallow. —Cookie S.

Chew it?  Nah nah nah. That’s all wrong. One does not “chew” the ocean. You hold it with your back molars while “squwooshing” it up against the roof of your mouth with your tongue, ensuring all your taste buds get a chance to experience the flavors—salty, sweet, umami, even a little sour from lemon if that’s how you play it—before sending it gently down your gullet. —Jessica D.

The correct number of times to chew an oyster is until it no longer feels like it will choke you when you swallow. —Tracy S.

One light chew if slurping from the shell. Two medium chews if resting atop a cracker. —Jere B.

As many times as you want. Life is short. Live it up. —Monte Burke, author

Get the Talk of the South newsletter in your inbox. Sign up here.