How to Make Perfectly Fried Catfish Duane Nutter thinks frying seafood is a skill every Southern cook should master. “They’ll let you slide if you can’t make a biscuit, but if you mess up the fish, they’re like, ‘Dude, are you from New York?’” says the chef, who plans to open seafood-centric Southern National with restaurateur Reggie Washington in downtown Mobile, Alabama, this April.

Nutter spent nearly a decade as executive chef of the well-regarded One Flew South in Hartsfield-Jackson Atlanta International Airport, and prior to that, cooked in such prestigious kitchens as those at the Four Seasons in Atlanta and the Ritz-Carlton in Palm Beach. But he learned his way with fried fish at home, in Morgan City, Louisiana. Almost every Friday, his mother, Rosalind, or his uncle Bob would fry fish or shrimp someone had caught nearby and brought to the house. “I didn’t even know you had to pay for seafood when I was a kid,” he says.

The list of fish Nutter grew up eating is long: snapper, flounder, speckled trout, perch, and gar. Later, when his family moved to Seattle, he came to love cod, halibut, and salmon. But catfish holds a special place. “If there were ever a fish that can have a terroir, it would be the humble catfish,” he says. Bad catfish can be mushy and taste metallic. Good catfish is sweet, with firm, flaky flesh. “It may be the only fish that makes me sound like I’m talking about wine,” he says. 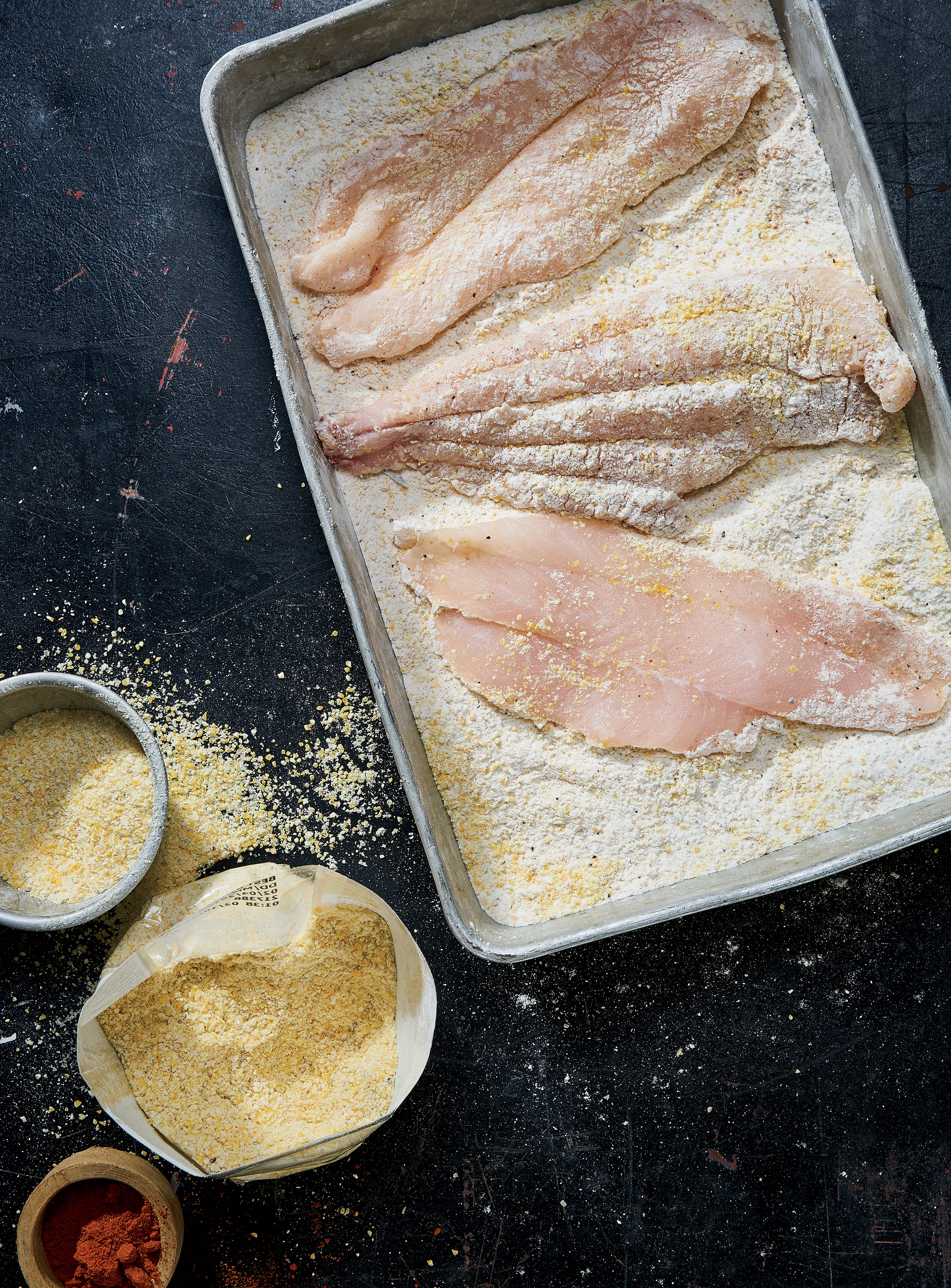 To make the most of it, he sidesteps the messiness of a heavy wet batter in favor of his uncle Bob’s highly seasoned dry cornmeal mix, which clings lightly to the fish. His pro frying tips? Make sure the oil is hot by dropping a little cornmeal into the pan; it should immediately bubble up with some attitude. Never crowd the pan, and adjust the heat to keep the oil temperature even. (Because cast iron holds heat so well, odds are the oil will get too hot.) Don’t mess with the fish once it starts frying. And give it a minute to drain after cooking, either on a wire rack over a sheet pan, or, as Nutter used to do as a child, on a brown paper bag.

Although his recipe for fish is based on a lifetime of experience, Nutter likes to dress it up with something he invented one night when he was frying pieces of trout belly and tail for his staff’s meal—whiskey tartar sauce. He had just mixed up his regular version, with plenty of pickle and fresh herbs, when he noticed a nearly empty bottle of bourbon. He stirred some into the sauce and discovered a new twist on a culinary trope. “I loved the little funk that bourbon gave it,” he says, especially the way the liquor played off the sweetness of the pickles. “It was one of those accidents that you’re glad happened.” Hometown: Morgan City, Louisiana
Favorite piece of kitchen equipment: “I’m a spoon guy. I need large spoons. I can work them like tongs.”
Why he keeps the music low in his kitchen: “I need everybody to hear my silly jokes and remarks. That keeps me going.”