A Visitor’s Guide to Copán 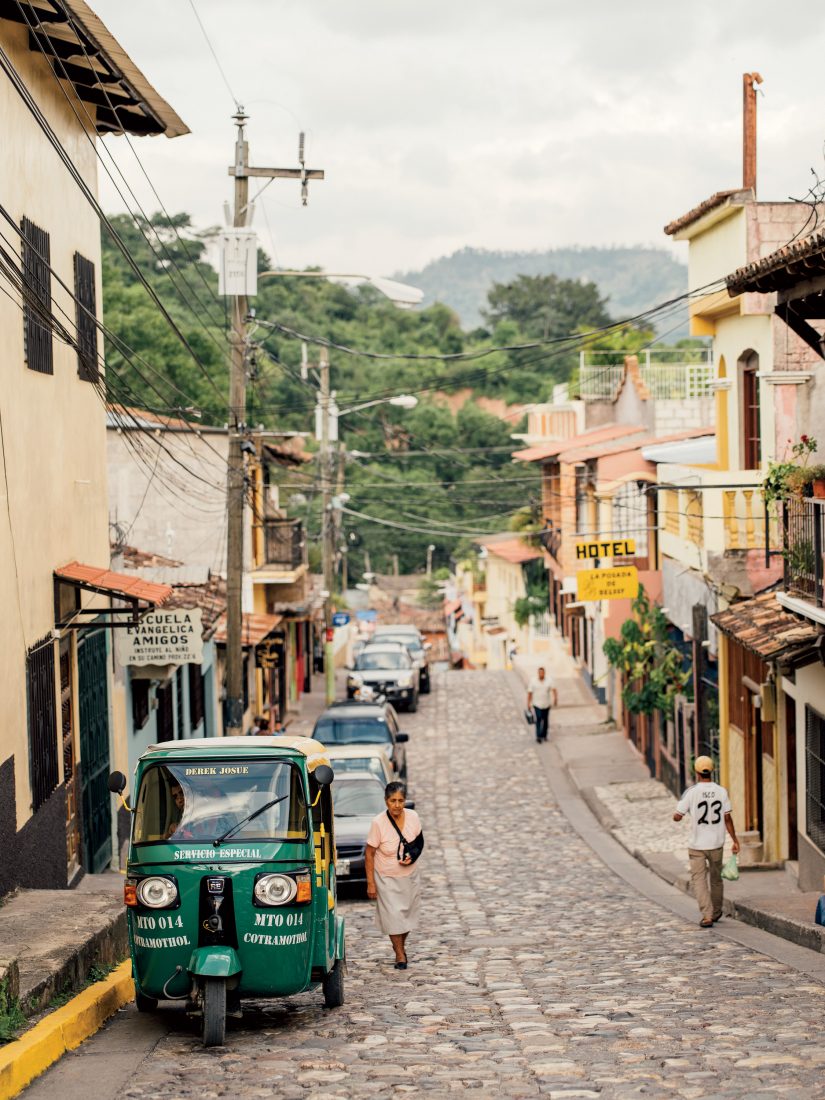 A cobblestone street in Copán.

Visiting Copán was my third trip to Honduras in the last six years, and my first to the country’s mountainous northern border. I brought my 18-year-old daughter, Markie, and we explored one of the most endearing towns I’ve seen in Central America. Cobblestone streets thread among low adobe buildings—homes, hostels, restaurants, pulperias, and souvenir shops, most roofed with terra cotta tiles. Three-wheeled mini-taxis called tuk-tuks scatter chickens, ferrying tourists back and forth from town to the Mayan ruins just outside. It’s a walkable, friendly hamlet, a fetching mix of locals, tourists, and expats.

At local bars and restaurants we watched soccer matches and chatted with archaeologists, European travelers on holiday, and local cattle ranchers in for a beer. In the market square, a low-slung building packed with stalls, we bought raw sugar molded like muffins in wooden planks. We rode horses. We bunked for a couple nights in an old hacienda-turned-inn just across the Copán River, then moved downtown to sample a few local hotels that would be all the rage if they were in the South Beach. We spent several hours each day milling through the village shops. Visitor traffic to the ruins supports plenty of knick-knacky souvenir shops, including tons of fun pop-up stands. But we dug deeper and discovered authentic, out-of-the way dealers in local sculpture and masks, cigars, and chocolates. The big win: A pair of made-to-order cowboy boots from a tiny one-man shop—Botas Wins. A modern recreation of a Mayan macaw sculpture.

Because of the ruins, in fact, Copán has always existed as a tourism base, so the town exudes an inviting, familial atmosphere that even Hondurans appreciate. On my flight from Miami to San Pedro Sula, I sat beside a 22-year-old Honduran-born U.S. citizen returning to visit friends. When he heard we were headed for Copán, he nodded appreciatively. “What a wonderful place,” he said. “What a beautiful, healthy place.”

The centerpiece of a visit, of course, is Las Copán Ruinas, the remains of the ancient Mayan city and temple grounds. I had no idea that the extant structures you see today are built on top of earlier, older temples and ceremonial centers, and while we scored a visit to the early research tunnels, there are scheduled tours for the general public. The Copán ruins aren’t as massive or extensive as other sites, but none touches Copán for the amount of sculpture and carved stone. And there’s a great museum with a reconstructed temple and some of the thousands upon thousands of artifacts recovered from the ruins. And there are the macaws, of course. Early and late in the day, the birds swarm over the main temple plaza, squawking as they head out—or return from—the wild forests of the mountainous Honduras/Guatemala border.

The centerpiece of macaw restoration is Macaw Mountain Bird Park & Nature Center, where visitors wander through acres of natural forest and manicured gardens, along walkways that connect to soaring aviaries filled with parrots, parakeets, tropical owls, and more. There’s a great little lunch grill, and the opportunity for some hands-on interaction with gigantic macaws.

The hub of our visit was ViaVia, which should be the first stop for any traveler. Run by a gregarious Belgian couple, it’s a mashup of hostel, restaurant, tour agency, and general hang-out, with an intriguing but not off-putting mix of locals, ex-pats, and tourists. The food is superb, and on-site you can book tours to hot springs, ziplines, Copán’s downtown region, and hikes and other excursions in the surrounding countryside. The 2-hour Copán “alternative hike” through the village, led by ViaVia’s irrepressible Geert Van Vaeck, is part historic tour and part street theater, but it offers a behind-the-scenes look at life in a Central American village that would be difficult to duplicate.

Finca El Cisne is a private coffee and cattle estate that sprawls across thousands of acres of valley and mountain country. My daughter and I spent the better part of a day exploring the farm with the Castejón family, which runs one of the finest agricultural tours I’ve ever experienced. While on horseback we came across a gate left open, and a small herd of cattle had wandered into the mountains. Off we went with the cowboys, for an unforgettable ride across the rooftop of Honduras. Fruit in the local market.

You really shouldn’t leave Copán without at least a dinner reservation—or better yet, an overnight—at Hacienda San Lucas, a quick taxi ride from town. The restored farmhouse is over 100 years old, and the hillside location overlooks Copán Valley with daytime views of the river coiling along the valley floor and a sunset scene of twinkling lights as the city ramps up for the night. This is known as one of the most romantic spots in the region, and the food is proudly local. Mayan staples such as maize, rice, and beans are paired with more contemporary dishes that are still cooked mostly in a traditional Mayan wood oven. I wish we would have had time to squeeze in a 2-hour hands-on culinary experience at the hacienda wood stove. Next time.

Lodging in town ranges from rough to superbly refined, but even the upper-end experiences were a bargain. The side-street setting at Hotel Don Udo’s kept things a bit quieter than the town’s central plaza, but it’s still super close to all the town’s hub-bub. You don’t feel like you’re just shelling out for a nice room. There’s an awesome open interior plaza with trees and a bar and fabulous restaurant, and upper balconies with hammocks that overlook cobblestone streets. But it was still hard for us to tear ourselves away from the very spacious rooms with fine dark Honduran wood furnishings and wide windows that look out into the treetops. Another just-off-the-plaza location is Terramaya, a smaller, more intimate setting with a library stocked with Mayan and Honduran literature, soaring cathedral ceilings, a massage pavilion, and drop-dead views of the forested mountains that rise above a plain of terra cotta rooflines.