A summer night, in a wannabe baseball stadium, in a city thirty miles outside Baltimore. Washington, D.C., to be exact. The Baltimore Orioles are playing the Nationals and losing. I’m used to this. The Orioles have been losing most of my life.

They were the only baseball team I knew growing up in Maryland, though, so I rooted for them anyway. Then, in 2005, the Nationals moved to D.C. I wasn’t sure what to do. Would I, at twenty-five years old by then, start pulling for them, too? I bought a Nationals cap and tried. But on this night in this unfamiliar stadium, I have my Baltimore Moment. It happens like this: An Orioles pitcher gives up a home run, then fires a pitch into the next batter’s shoulder. As the fans around me boo my guy in black and orange, I think: To hell with these people and this place. Take me back to Baltimore, to Camden Yards, the greatest of all ballparks, with the warehouse beyond the outfield wall, those hard seats under my rear, Boog’s barbecue in my belly, and John Denver in the seventh-inning stretch. Take me back to where it’s real. To say you love Baltimore once is to sign a contract forever. I, Michael, will remain loyal to this city, regardless of , and in some ways because of , and vow to love it until it fixes , in this life or the next.

Fill each blank with one of the stories you’ve read. Maybe it’s the one with the mayor being indicted for taking illegal gifts. Or the police officers being convicted of racketeering and robbery. Or the decades of racial and economic chasms. Or modern Baltimore’s zero hour, April 2015, when a young man died after suffering a severe spinal injury in the windowless compartment of a police van, setting off roughly two weeks in which buildings went up in flames as people cried for justice for Freddie Gray.

Those are all true stories. But if you look closer, you might come to understand that Baltimore is in many ways America’s most interesting and honest city. It simply isn’t trying to hide its troubles. And if it is, my goodness it’s bad at it. What I love about Baltimore is that it has lots to gloat about but it doesn’t gloat at all. One of its nicknames is Charm City, and it doesn’t serve that charm on a platter of superficiality. It’s not a city of second homes and vacation rentals. People live here, and the charm is in their neighborhoods.

In September 2015, five months after the protests, Maryland native David K. Thomas sold his restaurant, Herb & Soul, and stepped back to consider his next move. Then one day, the nonprofit organization the Real News Network offered to partner with him on a restaurant in an old candy factory downtown, with one caveat: The restaurant had to do more than just serve food. David and his wife, Tonya, drew up a vision for a modern soul-food restaurant with a menu of greens, cornbread, Old Bay fried chicken, and other dishes that tell the story of the area. They named it after Ida B. Wells, the black journalist whose antilynching activism was a precursor to the civil rights movement. They pay each staff member at least fifteen dollars an hour plus health benefits. They have music every weekend and host collaboration dinners with chefs from different cultures—the first was a Filipino mash-up. They also plan to soon launch their “Discomfort Series,” regular community conversations in which panelists discuss issues facing the city over a three-course meal.

“Are we going to solve all the world’s problems?” David says. “No. But as Americans, we have to stick together. And I don’t know a better way to bring people together than food.” Ida B’s Table is a new member of Baltimore’s under-rated food scene. My father was a charter-boat captain on the Chesapeake, and though Baltimore sits off the Patapsco River on the bay’s northern edge, we always joked that city folks didn’t know how to make a real crab cake. We were wrong. As an adult, I’ve had softball-sized cakes at places like Faidley’s and Jimmy’s that rival those at rural crab houses, and today, thanks in part to efforts to help restore the country’s largest estuary, you can find local seafood in any direction, from Dylan’s Oyster Cellar in Hampden to chef Cindy Wolf’s acclaimed Charleston in Harbor East.

READ MORE: What to do (and eat) in Baltimore, Maryland

Though people often try, you can’t make generalizations about Baltimore. You could hop from neighborhood to neighborhood for a month and not be able to describe it in a sentence or two. The brightly lit Inner Harbor will chew up your traveling money, with tall ships and the National Aquarium and all the Hard Rock Café/Cheesecake Factory you can handle. But you could pass days there and not meet an actual Baltimore resident other than waitstaff. My brother lived for ten years in a brick row house in Canton. Michael Phelps, the most decorated Olympian of all time, lived down the street. When Kenny’s job moved him south, his neighbors threw him half a dozen send-off parties. They gave him a brick painted with an image of his favorite bar, and the staff and his friends all signed it.

Baltimore’s charm hides in gestures like that one. It’s in the cobblestoned streets of Fells Point and the old docks of Port Covington, where Under Armour CEO and Maryland native Kevin Plank is investing in new developments and jobs. It’s in a jog along the waterfront promenade in Federal Hill as the sun rises over the harbor. It’s in Sip & Bite diner, where a few years ago Kenny and I celebrated opening day with breakfast crab cake sandwiches topped with bacon and eggs, and washed them down with Natty Boh’s before 9:00 a.m.

One night, I walked north from the aquarium in the Inner Harbor to Mount Vernon, a historic neighborhood lined with big brownstones and period architecture from Renaissance to Classical Revival. The main road, the one-way North Calvert Street, passes through intersections at Read and Eager Streets. I chuckled as I went “Eager to Read.” It’s corny, but to me it was another secret, whispered to me by this town.

When I was growing up, you see, the city benches had a slogan inscribed on them. This started in 1987, after Mayor Kurt Schmoke said that he wanted Baltimore to be “The City That Reads.” It became a joke.

It’s not entirely off-base, though. Baltimore gave birth to modern-era writers such as Ta-Nehisi Coates and Tom Clancy, and it also claims the curious Edgar Allan Poe, who died here under mysterious circumstances; his gravesite is off Fayette Street. Baltimore discontinued THE CITY THAT READS, and in recent years, it adopted BIRTHPLACE OF THE STAR-SPANGLED BANNER, honoring the fact that Francis Scott Key wrote the poem that became the national anthem at nearby Fort McHenry. But I spotted my favorite slogan recently at a coffee shop bookstore with works from local authors that tell the real stories behind this restless, beautiful, complicated city.

Among a row of T-shirts for sale was one with a sketch of a park bench on the front, scribbled with a statement that some might read as ironic but to me is indisputable: BALTIMORE: THE GREATEST CITY IN AMERICA. 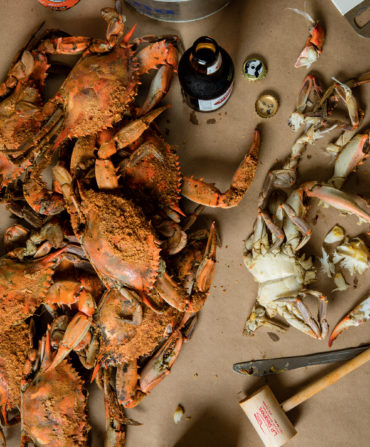