Plus: Hear “Long Way Back Home,” a new song from the Memphis band’s forthcoming album Among the Ghosts 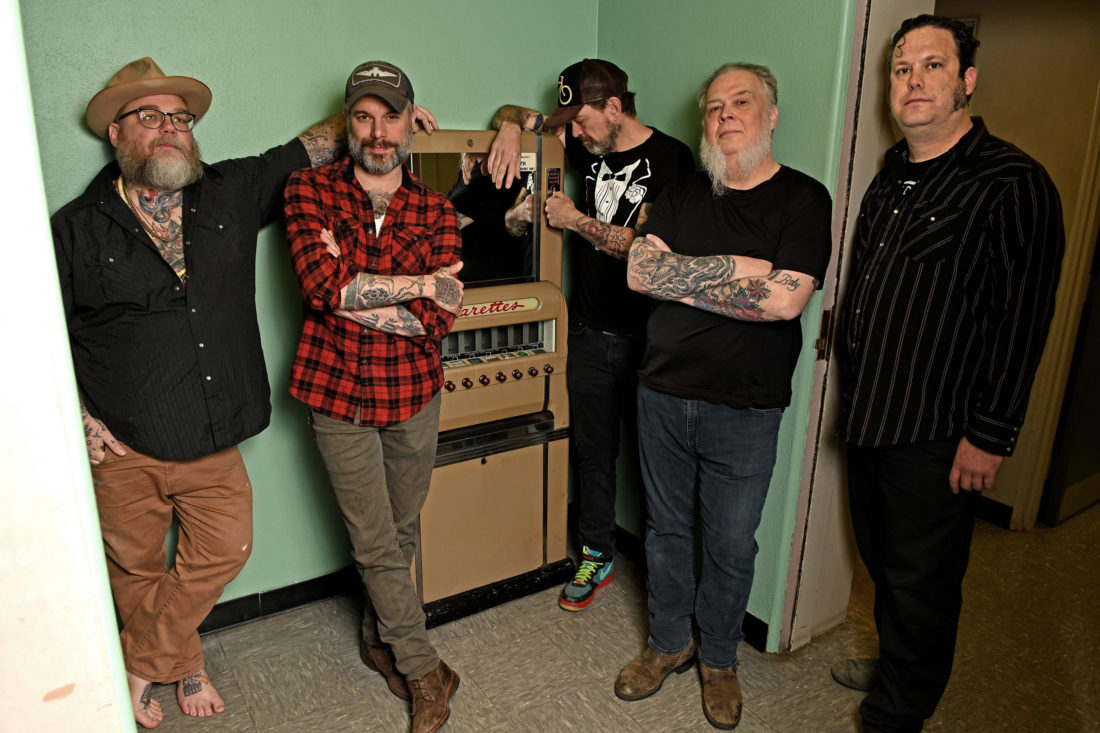 When Lucero took the stage in Memphis for their first show in April 1998, they didn’t exactly expect to spend the next two decades packing out hundreds of live shows a year.

“To be honest, the goal was to play one show,” says Ben Nichols, the songwriter and frontman whose raspy vocals and vivid lyrics have become the band’s trademarks. “Then, after a couple of shows, the goal became to record a couple of songs and release a seven-inch. Then the goal was to get a van; then to book tours outside of Memphis. Accidentally, and step-by-step, we achieved those goals and just continued on.” Twenty years later, Lucero is still redefining the Memphis sound. The band will release their ninth album Among the Ghosts on August 3—G&G readers may recognize the hauntingly beautiful cover as the work of Mississippi tintype photographer Michael Foster—and it’s a return to form for the band. “Now, we’re actually having more fun and taking it more seriously at the same time,” Nichols says. “After twenty years, we’ve finally figured out how to do it the right way.”

Garden & Gun caught up with Nichols recently about the new music, the surprises of fatherhood, and the enduring grit of Memphis. Scroll down to read the interview, and press play below for an exclusive first listen of album track “Long Way Back Home.”

You just celebrated twenty years as a band in April. How would you compare this album to Lucero’s early days playing together?

This is a nice record to be releasing at our twenty-year anniversary mark because it takes everything back to the old days. We did the last two records with producer Ted Hutt, and he really helped us bring out this Memphis sound—Stax-style horn sections, almost a Jerry Lee Lewis–type of piano part. I loved exploring Memphis’s history, but Among the Ghosts peels that away. This record strips everything back to its essentials, and the songwriting is at a more mature place, too. This is the first record I’ve written since my daughter was born, and since I got married. It’s not a happy record, necessarily. It’s actually pretty dark, considering how happy I am in my personal life. But I think that being a parent—actually having something to lose—adds to the seriousness of everything, and that influenced the record quite a bit.

That’s an interesting way for your personal life to intersect with your work. What surprised you most about fatherhood?

How fun it is. [Laughs] My wife has two teenagers, and I knew she was going to be a great mom because she’d raised two great girls already. But I had no confidence at all in my own parenting abilities. I was fairly stressed out about all that. Then the kid showed up, and she’s just a whole lot of fun. When I’m not on tour, the older kids go to school and my wife goes to work, and it’s just me and her. We hang out at the house, we eat food, we walk around in the yard, we watch some ’toons. She’s hilarious. I didn’t know how fun it was going to be. I was so busy being worried, but in reality having a kid is the most fun thing you could ever do.

Some of the darker moments on Among the Ghosts are fictional narratives. “Long Way Back Home,” for example, is a first-person retelling of a violent crime. What inspired that song?

In the past I’ve mainly written in the first person about very specific things from my life. My writing was extremely autobiographical—almost to a fault. I tried to get away from that on Among the Ghosts. “Long Way Back Home” in particular was inspired by the films of my little brother, Jeff Nichols. His first film was a movie called Shotgun Stories that takes place in rural Arkansas, where our family’s from. I wanted to capture something with a similar feeling—a Southern gothic story that’s a little frightening, but that comes from a familiar place. I had been reading other Southern authors, too: short story writers like Ron Rash and Larry Brown and William Gay, who told stories that captured a time and place, but always seemed to have a little bit of darkness to them.

We’re going to explore the story [in “Long Way Back Home”] a little bit more soon. I’ve got Jeff [Nichols] coming down to Memphis to shoot a video for the song. Michael Shannon and Paul Sparks and a few other actors are volunteering their time. I’m curious to see where Jeff takes it, but I think it’s going to be one of the coolest things we’ve ever done.

You’ve worked with your brother Jeff on film projects before. What are some of the similarities between writing music and making a film?

One of the things I love about putting a song together is all the pictures that are running through your head as you’re listening to something. The words—and even more often, the chord progressions and instrumentals—can trigger all sorts of memories. The difference is that you can listen to a song anywhere: in your car, walking down the street, at any time and any place. When you’re listening to a song, you’re living your own movie, as opposed to watching someone else’s. Films tend to tell a complete story, with characters and a plot and a story arc, but with a song, the listener gets to make all that up on the fly for themselves.

How has Memphis changed in the twenty years since Lucero began, and how has the city impacted your music?

Memphis always had an excellent local music scene. When I was twenty-four and the band was just starting out, there were shows at seven different venues every night. Everyone you knew was in a band, and it was a very inspiring place to be. At the same time, because of Memphis’s very rich musical history, there were all these slightly older studio musicians—guys like [Lucero keyboard player] Rick Steff—who were excellent. The punk-rock, do-it-yourself musicians blended and mixed with this community of well-trained professionals. We were lucky to have that environment, and there’s still a lot of that there.

Like a lot of cities, neighborhoods are changing. New buildings are going up, new restaurants are coming in. The city is definitely growing, but not at the same rate as a lot of other places. Memphis isn’t exactly a Seattle or an Austin, or even a Nashville, and I don’t know that it ever will be. But the spirit and the character of the place, I think, will always be intact. Nashville’s kind of the more successful big brother, but Memphis has an underdog quality. And I think that suits Lucero just fine. A Soul Food Beacon in Memphis

Fifty years after the pivotal “I Am a Man” strike, Ms. Girlee’s carries on a nourishing legacy