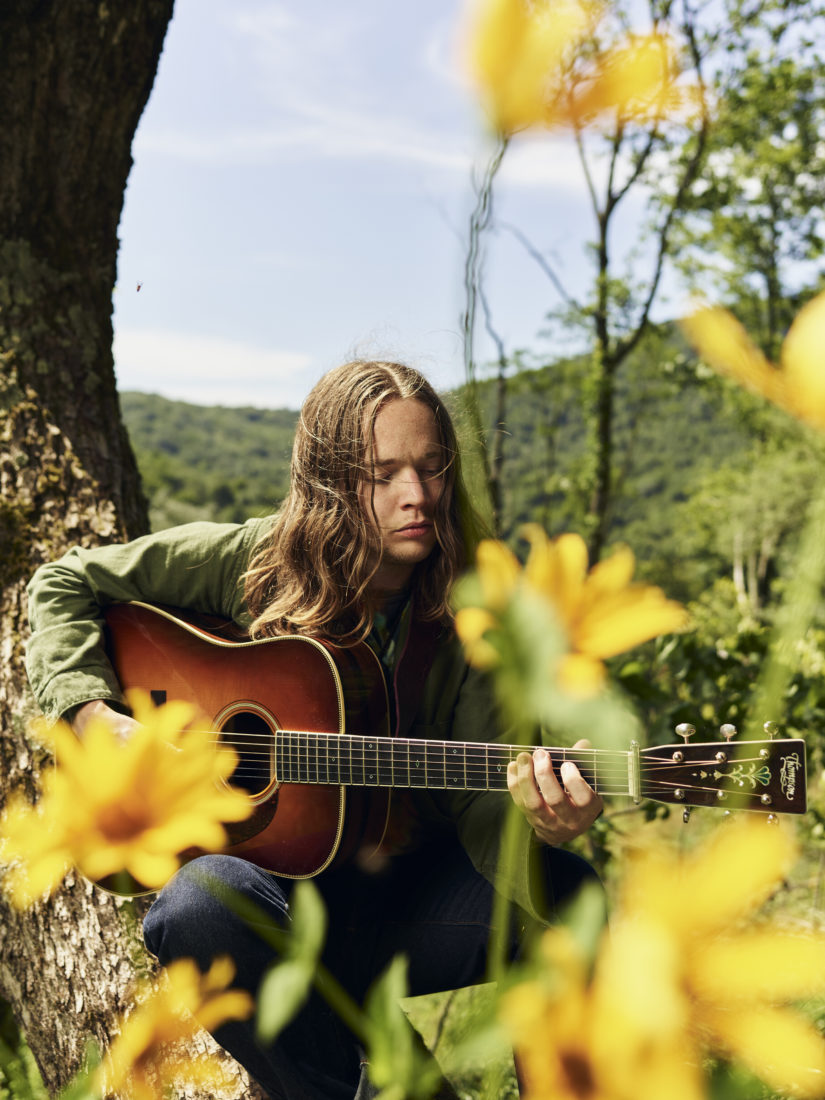 It’s a sweltering afternoon in New Martinsville, West Virginia, the sun and humidity punishing workers who are readying the stage for the opening night of the Back Home Festival, a celebration of Appalachian sounds and community set in a grassy field just off Main Street. A black and silver tour bus idles behind the stage, the inside cool, hushed, and dark. It’s a little past 2:00 p.m., and Billy Strings has just woken up, with a shaggy bed head. Wearing blue jeans and a white T-shirt emblazoned with the logo of bluegrass legends Hot Rize, he squints out the window. “Wait, are you high enough to do the interview?” asks Ally Dale, his tour manager and girlfriend. “No, I am not,” he says with a grin.

The twenty-six-year-old Strings might be a bit of a stoner, but he’s no slacker. He estimates he’s played around two hundred shows each of the last seven years, including a sold-out night at Nashville’s Ryman Auditorium this summer that left the audience gobsmacked and howling for more. The delirium has reached a crescendo in such a way that Dale has started to have preshow meetings with security staff at each venue to warn them of potential stage crashers. “The last dude was really spun out,” Strings says, smiling.

It’s easy to see why Strings’s music sparks exuberance: His ferocious flat-picking guitar wizardry melds traditional sounds with the rhythmic crunch of punk and heavy metal, along with exploratory  jams that have already become the stuff of legend. It’s not a stretch to think that Strings will eventually take his place on progressive bluegrass’s Mount Rushmore alongside Sam Bush and Tony Rice. “He’s the future of bluegrass,” says Dobro great Jerry Douglas, who guests on Strings’s mesmerizing new sophomore album, Home. “He’s found a way to bring all those sounds together. No one has been able to do that yet.” Beyond his dazzling guitar, a major part of Strings’s appeal is that his lyrics are instantly relatable to a modern audience, infusing the world-weariness of bluegrass with a contemporary edge on subjects ranging from substance abuse to the paralysis of living in a dead-end town. The scourge of opiate addiction ravaging much of rural America is something Strings has witnessed firsthand, and on Home, “Enough to Leave” is an open letter to two friends who overdosed within a week of each other. “I know people with sores all over their faces who have been up for nine days and haven’t eaten in a week,” he says. “One day they’re sitting in my living room, the next day they’re getting shipped off to prison for twenty years. So with my songs I put myself out there in a vulnerable way, and it’s almost therapeutic to me. My dad wasn’t a coal miner, so why would I write about that?” Home’s gotta-get-outta-this-place title track is Strings at his most epic, with a mournful melody that gives way to a ferocious instrumental breakdown, complete with an electric guitar, while the psychedelic swirl of “Highway Hypnosis” provides a respite with a breezier ode to life on the road. Cooling off along a mountain stream.

Born William Apostol, Strings grew up in Muir, Michigan. His father, an accomplished player, gave him his first guitar when he was four, and by age seven, the budding musician had become his sidekick at picking parties, where he was schooled in the sounds of bluegrass, including his favorite player, the North Carolina flat-picking icon Doc Watson. An aunt who marveled at his guitar playing dubbed him Billy Strings.

As he got older, Strings began obsessing over Jimi Hendrix and metal bands. A self-described “class clown,” he was expelled from public high school before eventually finding an alternative school where he blossomed as a student. But even with a diploma in hand, he remained at a crossroads. “I had teachers tell me I wouldn’t amount to shit,” he recalls. “I didn’t have a lot of sense of self-worth. I grew up in a small town, and it just seemed impossible to get out of there.”

On a whim, Strings moved to Traverse City, a resort town on a bay of Lake Michigan, where he worked as a janitor at a local motel while playing bar gigs at night. He found a welcoming circuit of progressive bluegrass players, and as soon as he began making more money from shows than from his day job, he and Dale decamped for Nashville in 2016. Word quickly spread through Music City that this guitar player from Michigan was something special. Along with a bevy of guests on Home, he’s joined by Billy Failing on banjo, Jarrod Walker on mandolin,  and Royal Masat on bass, all extraordinary players in their own right. They have to be to keep up.

“I’m just trying to get inside of the music as much as I can,” Strings says. “I love bluegrass, but it’s not 1948. What I’m doing has always been my calling.”