Take a photographic journey through the region’s at-risk places

Since the U.S. Postal Service introduced zip codes in 1963, the numbers and their corresponding post offices have helped to define cities: Without one, a small town merges into a larger one, diluting both name and history. “Zip codes are intertwined with sense of place,” says the Nashville photographer Rachel Boillot. In 2011, the USPS announced a plan to close nearly four thousand post offices, discontinuing some zips—disproportionately in the rural South—and although not all shuttered immediately, the downward trajectory has continued. In 2012, Boillot, then a master’s student at Duke University, began her Post Script series shooting endangered and defunct post offices in hamlets throughout the region, traveling to hundreds of  them over the next two years. On Harkers Island, North Carolina, she met a woman who had salvaged the old mail slots from her mother’s post office to use as storage in her home. “When I got to the post office in Sherard, Mississippi, people were gathered around the front stoop because there was a snake—hence the hoe in Ida’s hand,” Boillot says. “Post offices are still gathering places in rural communities.” —Caroline Sanders The Georgia photographer Brian Brown recalls how a blanket of Lowcountry fog rolled in the morning he shot the Henry Walcott House, swaddling the structure in Long County, near the coast, with an otherworldly feeling, as though one were looking back in time. No surprise, considering looking back in time is sort of Brown’s MO. For Vanishing South Georgia, his twelve-year-long project, he has made a habit of getting lost in the lower half of the state, capturing more than 125,000 images of structures similar to this antebellum home. To Brown, the architecture of the house, built with whatever materials were available and sans architect, conveys the reality of rural landowners in the mid-1800s. Though it’s much better preserved than many of its contemporaries, to the photographer the home also suggests a ticking clock. “A photograph may be the only way to save the place for future generations to see how people lived,” Brown says. —Emma Witmer At sunrise one day in March 2018, two Florida panthers unknowingly crossed the infrared trigger of a custom camera trap the photographer Mac Stone had set deep in Corkscrew Swamp Sanctuary. Activated by their movement, the camera snapped this intimate and rare portrait of a male and a female that became part of Stone’s Old Growth: Ancient Swamps of the South series. The pair went on to have a litter of cubs together, Stone says, and he likes to think this was their first date. “A camera trap is like creating a studio in the field and waiting for the animal to take a selfie in the landscape you’ve set up,” he explains. The endangered species has endured habitat loss, hunting, disease, and inbreeding, all factors that diminished the population to what some scientists have estimated to be as few as six individuals before they fought their way back to around two hundred. This image captures the wild heart of a South few people know exists, Stone says, and symbolizes hope for an iconic species that represents “the real Florida.” —Lindsey Liles

Last May, the Alexandria, Virginia, photographer Cameron Davidson took to the sky to capture a swath of central Appalachia reaching into Tennessee, Virginia, and Kentucky that has seen extensive mining and mountaintop removal. Davidson’s focus: the 253,000 acres the Nature Conservancy purchased to protect the land—a critical corridor for warblers, elk, freshwater mussels, bats, and native fish—from further development and depletion, and to spur economic development and ecotourism. The first day of the shoot, Davidson boarded a Robinson R66 helicopter near Dollywood, in Pigeon Forge, Tennessee. “All the aerials were taken in one long four-and-a-half-hour flight—with a stop to refuel,” he says. A few days later, he captured a more human side of the region when he spotted this footbridge overgrown with kudzu above the Cumberland River, pulling his truck into a church parking lot near Watts Creek, Kentucky, to launch his drone for the perfect angle. This has long been a challenged area, both economically and environmentally—“but it has options now,” Davidson says. “I like being able to show the big picture.” —Caroline Sanders 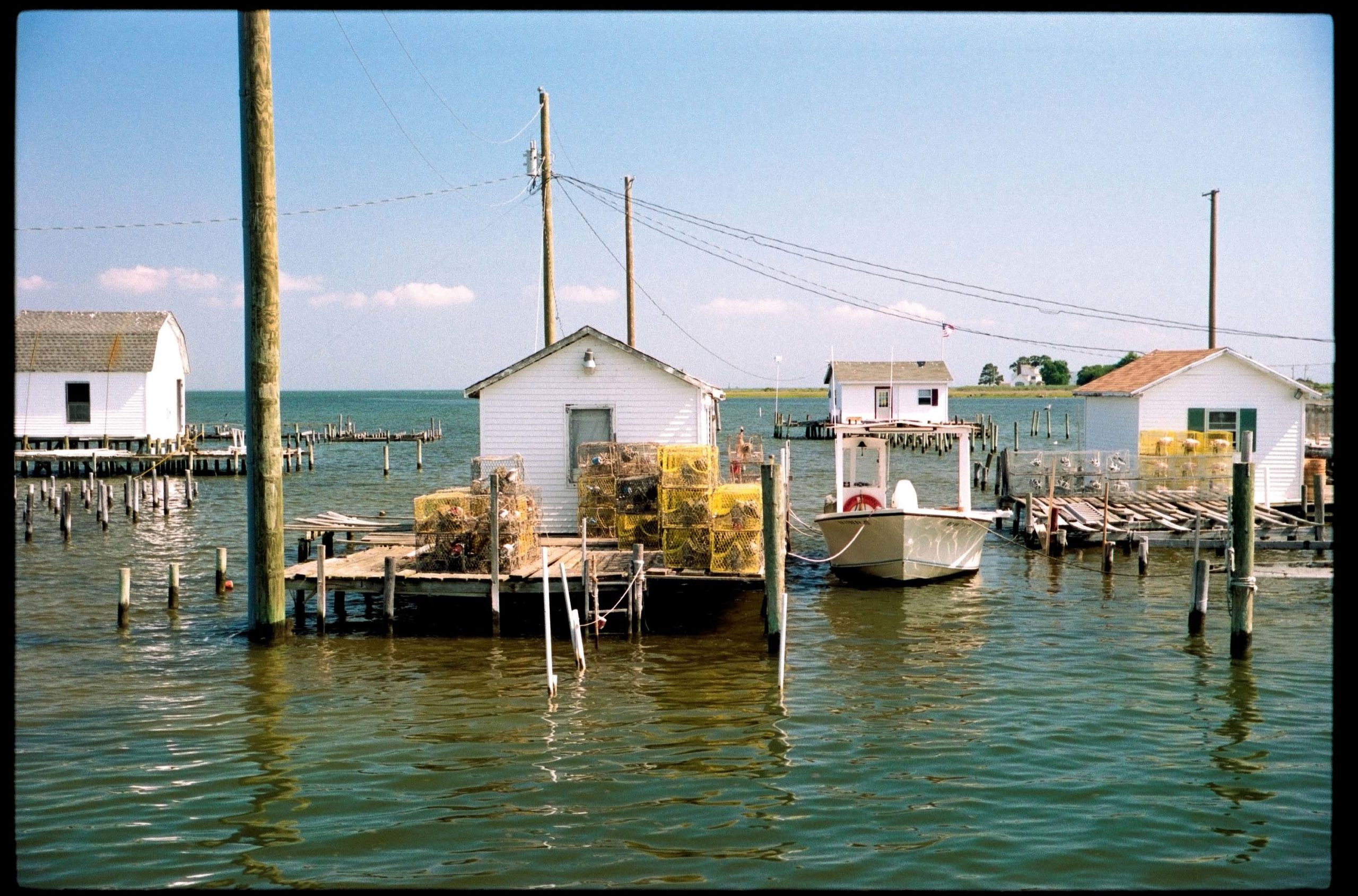 These crab shanties stand on spindly legs in Tangier Island’s Mailboat Harbor, off the coast of Virginia. They are four of many such shacks; Tangier is considered the soft-shell crab capital of the world, and watermen use the shanties for holding and sorting. But Tangier and its crab business are living on borrowed time; two-thirds of the island is already underwater due to storm-driven erosion and sea-level rise, and experts estimate the Chesapeake Bay outpost might have just thirty years before water claims the rest. The photographer Gunner Hughes, a Maryland native, took this shot (part of his  Dear Tangier series) on the hottest day of the summer in 2018, off the back of the ferry that transported him to the mainland after a weekend spent trying to capture the essence of the island. Hughes says that the series “is a portrait of a way of life, a group of people, and an island, before it’s gone.” —Lindsey Liles