How to Leave a Party Q. We have lots of parties. What is it with the folks who “take French leave,” which in our usage means sneaking out without saying goodbye?

Before we assign the phrase to a group of people who may have many different motivations to leave your parties, let’s explore the fact that it isn’t—just—“French” leave. The Oxford English Dictionary informs us that the derogation was first used in print in England in 1771, as the French and English were slogging through their centuries-long series of wars—soon to include our Revolution. I don’t think we’ll be accusing the Marquis de Lafayette of taking “French” leave during that. Predictably, the French describe it as taking “English” leave, a turn of phrase with which Russians, Hungarians, and Belgians all absolutely agree. Mobile, Alabama, and New Orleans have comical difficulties wrestling with the idiom—one-half of town blames the English and the other half blames the French, depending on ancestry. The phrase has also come down as taking “Irish” leave, a jolly twist of the knife that seems mainly to be used by Irish Americans accusing other Irish Americans of getting drunk and forgetting their manners. At any rate, leave-taking without leave-taking can be defined as ill-mannered. But from the perspective of the slinker-outer, there are four good reasons for leaving a party unannounced. First, what’s out front? All parties have paparazzi equivalents, be they business rivals, hangers-on, or the more lethal party killers ready to waylay anybody with their late-night career-advancing agendas. Second, you, the host, are also presumably manning the door, which is to say, the host functions as a sort of benevolent tribunal. Your guests, or someone with them, might not be in the best condition to present themselves to you again en route home. Third: Ask yourself, who else went missing at or about the same moment? Your fete might have kindled a romantic tangle, and the new lovebirds may just need some privacy as they skip off to their after party. Fourth: You may not like hearing this, but maybe it wasn’t the best darn party you’ve ever thrown, and the “French” leave-takers just can’t face telling you how brilliant everything was.

Q. This year we’re thinking of doing Mardi Gras outside the country. Any suggestions?

Inviting yourself to an overseas Mardi Gras approximates inviting yourself to Sandringham for Christmas with the Royal Family: Even if you slip in, you won’t understand anything anybody says or does. So, do you speak Portuguese, Italian,  or French? If yes, please attend the Mardi Gras where you have the linguistic leg up. Fluency aside, at the top rung of expat Carnival difficulty is Rio de Janeiro, home of samba, kaleidoscopic, beautiful, and more than occasionally dangerous. Venice runs second in beauty and in difficulty. The Adriatic capital is tiny and old, with families going back six and eight centuries, so that Carnival celebrations, though fine, are socially impregnable. For an easier time, consider Saint Barthélemy. Once your single-prop four-seater clears the rocky ridge in front of the runway without crashing, Fat Tuesday is almost beside the point: You’re alive and you will be on the beach, in a very weird part of France. Side benefit: Nobody will be shouting for anybody to take their bikini tops off, because, on Saint Bart’s, nobody wears bikini tops.

Q. We have fox hunts that run through our property. We thought it fun to offer the hunters the traditional stirrup cup. Recipes?

The term refers to any libation offered before any leave-taking, but one classic foxhunting stirrup cup is a meaty dividend of port. Since you’re offering drinks to all body shapes and sizes, all of whom will shortly be on a daylong hack requiring exquisite acrobatic control aboard extremely large, fleet animals, go low on alcohol and high on sustenance. It’s not Bloodies after church. Eschew hard liquors in favor of mulled red wine, which is to say, cinnamon, allspice, cloves, a bit of nutmeg, lemon peel. Hearty and warm. Better still: As they saddle up, pass around trays of fortifying country-ham biscuits. 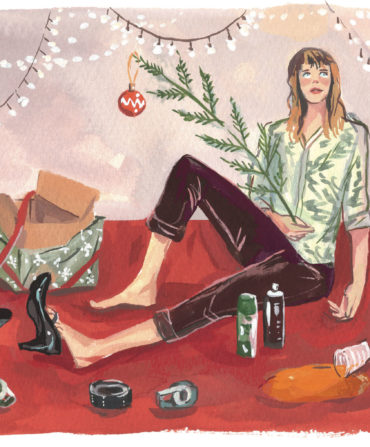