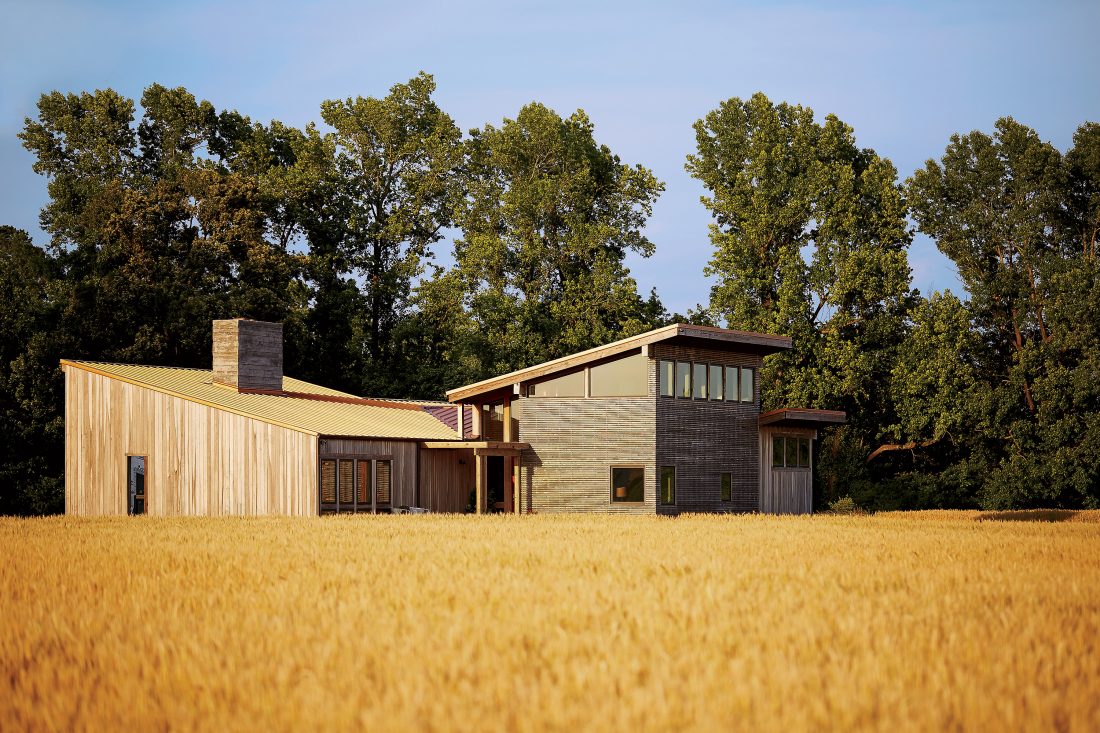 Howard's modern farmhouse sits nestled in a wheat field across from her childhood home.

According to Vivian Howard, one of the South’s preeminent young chefs, the middle of nowhere is a place called Deep Run. It’s in Eastern North Carolina, near Kinston. This is where she lives now with her husband, Ben Knight, and their two children, in a home the likes of which no one around here, or anywhere, has ever seen before. The house—which from one angle looks like two farmhouses stuck together—sits on the edge of a wheat field, bordered by cypresses and shaded on one side by two giant sweet gum trees. There are chickens and there are dogs, and soon there will be a studio out back, where Knight will paint. Howard’s story is fascinating, but the story is not about how she first got here. Chalk that up to the accident of birth: Deep Run is where she was born and raised and spent much of her life trying to escape. How she got back here: That’s a tale worth telling. As it turns out, the middle of nowhere is a beautiful place.

Home—like mom, a first love, your best dog—is indelible. Impossible to ignore but easy to disdain. And yet one thing is supposed to be the same for us all: that no matter where you go, it’s the only place you can’t go back again. At least, that’s the boilerplate, Southern Zen, our old uncle Heraclitus’s version of You cain’t step into the same river twice. Growing up, there was no place Vivian Howard wanted to leave more than Deep Run. And she did leave it, for years, trading the middle of nowhere for the center of everything, New York City. It’s where she met the man who would become her husband, and where together they explored the idea of becoming restaurateurs.

By day they worked as waiters, and then Howard, eventually, as a cook at wd~50, one of Manhattan’s hottest eateries. This was in the early 2000s. At night, they made soup in their bathtub and drove around the city, delivering it to their clients. Soup in the bathtub. I wish I’d made that up, but it’s true. And just when they were this close to settling down up there in a forever kind of way, her father made an offer she couldn’t refuse: Come back to Deep Run and I’ll help you start a restaurant of your own, right down the road in Kinston. He’d even throw in a parcel of land for a place to build a house. Thus the restaurant Chef & the Farmer was born, and later, a TV show—PBS’s Peabody Award–winning series A Chef’s Life, which begins its second season in September. But they still needed a place within this place to live, something all their own, and that’s what their new house became: a fusion of who they are, where they’ve been, and where they’ve chosen to make their lives.

Take a barn and a New York City loft, throw in a chicken coop and a spacious porch, and, even if you can’t imagine it, you can understand the philosophy behind their home. Knight is from Chicago, and his mother has a friend there who’s a well-known architect—Ann Clark. The three of them worked together to come up with the design. “We wanted a happy place that melded the architecture of Eastern North Carolina and our own aesthetic,” Howard says. The floors are made of low-maintenance concrete, the walls of native cypress. The heart of the house is what might be called the great room but feels more like an echo of a loft: In one long alley is the kitchen, the dining room, and the living room. “I can be in the kitchen doing what I love to do and be part of what the family is doing at the same time,” Howard says.

Though they’ve been back in Deep Run for almost a decade, they’ve been in this house for only a little over a year. And though it still has that new-car smell, it’s furnished with the past.

Howard takes me on the tour: Against one wall is a pew from the Southern Baptist church she attended as a child. There’s a writing desk that belonged to Knight’s grandmother. The planters are crocks her father made pickled pork in a long, long time ago. On the massive porch out back—part screened, part open, with a fireplace that wouldn’t be out of place at Hearst Castle—is what Howard calls a tobacco truck: a small flatbed on wheels once pulled by a donkey. Instead of tobacco, it’s now loaded down with basil and mint. On the wall as you take the stairs to the playroom on the second floor—from which you can see the house she grew up in, right across the road—are nearly a dozen butter-bean shelling pans. It’s one of the things you do as a girl growing up in Deep Run: shell butter beans in front of the television. This Butter Bean World is the one she was trying to escape; back here now she celebrates it, the same way her restaurant celebrates the local farmers who grow them. More than 70 percent of the foodstuffs at Chef & the Farmer come from within a sixty-mile radius.

Location, location, location: That’s the retail mantra. So building a home and a restaurant in the middle of nowhere doesn’t seem like the smartest choice. But who says you can’t make nowhere somewhere? Bring the customers and the cameras here? Because that’s exactly what Howard and Knight have done.

The moral, dear reader, is this: If the river’s still there, feel free to step into it. The water’s fine.

And PS: Their bathtub is especially lovely.

A historic estate provides the stage for an award-worthy revival

A Room of Our Own

Let Bunny Williams Show You How to Thrive at Home

The Virginia-raised designer on her homebody leanings, a new documentary, and a porch party secret that will definitely surprise you