Plenty of Southerners have found a sweet home in the Windy City. And today, a new generation is proving the Midwest’s metropolis is still their kind of town 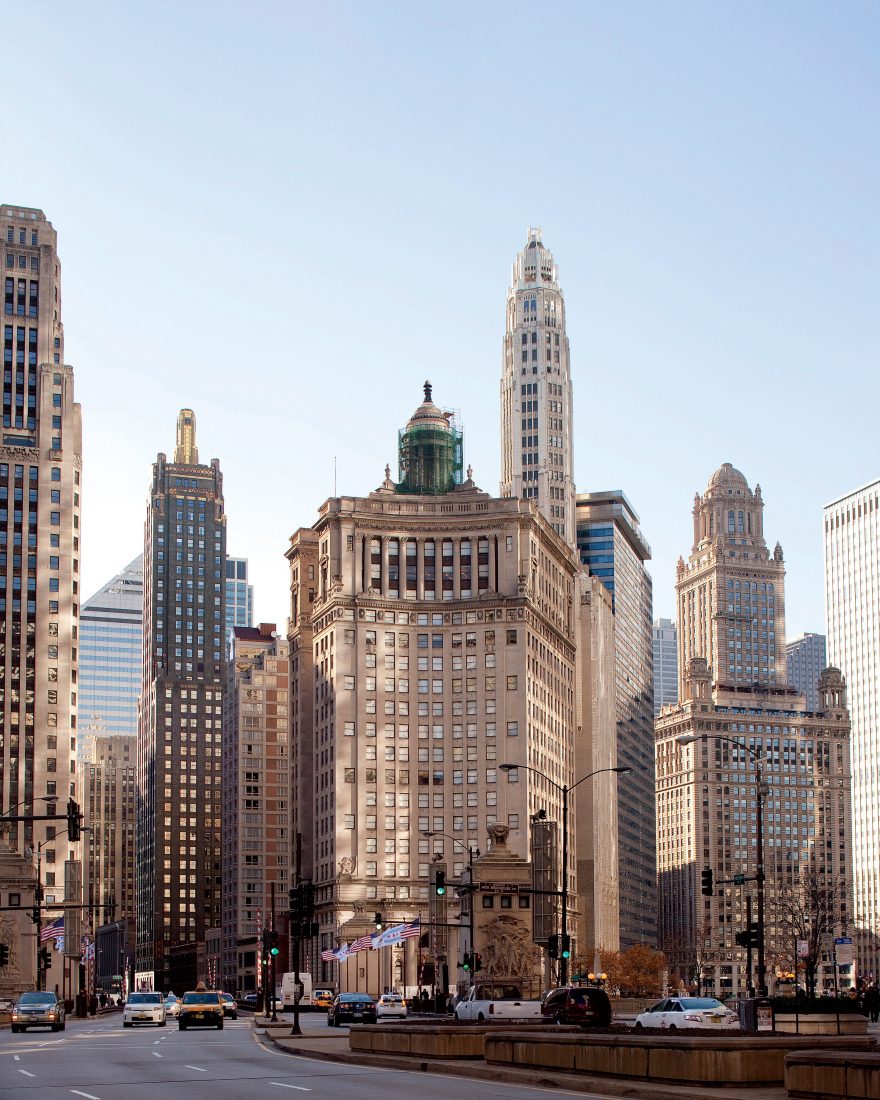 A sampling of Chicago's iconic architecture along North Michigan Avenue.

The first time I visited Chicago, it was with a group of friends to attend the deb party of my Georgetown roommate Nora Cooney. Nora’s mother had died before I met her, but she’d been one of the city’s leading decorators; her father, “Ace,” was a larger-than-life trial lawyer who presided over the improbably tasteful bar (complete with stools) in their enormous apartment on North State Parkway (otherwise known as “State Street, that great street”). Ace poured us icy martinis, ordered up filets with béarnaise at the Ambassador East’s legendary Pump Room, and ensconced us for the weekend at the Ambassador West, both of which were in the same block as the apartment (as was Hugh Hefner’s original Playboy Mansion). The party itself was at the Saddle and Cycle Club, a country club complete with a three-hole golf course smack in the middle of the city, and by the time I left, though (or perhaps because) I’d only seen a fairly rarefied view of the place, I’d decided that Chicago was definitely my kind of town.

Thirty years and countless visits later, I returned to the same Gold Coast neighborhood to deliver the eulogy at the memorial service of my first cousin Frances. Though Frances had grown up in Nashville, she’d gone to college at Lake Forest, her father (from whom she was mostly estranged) had been a reporter at the Chicago Sun-Times, and her half brother Peter is a photographer who once shot commercials at his studio across the street from Oprah’s. Like me, Frances lived for a time during her twenties in Manhattan, where she worked in banking, but drawn by her ersatz Midwestern roots, she returned to Chicago and built a successful career in real estate. The last in a series of her own ever dazzling apartments was in the building that had once been the Ambassador West; the night before the service I checked in across the street at the old Ambassador East, now Ian Schrager’s Public, where the revamped restaurant is still called the Pump Room (though the tenderloin is currently sauced in mole). Frances’s death—in Venice, of all places—had been sudden and shocking and awful, but even though her brother and most of our extended family still live in Nashville, there was never any question of where we would celebrate her life. Looking out at the crowd of almost five hundred at St. Chrysostom’s Church, I realized why. There was Frances’s friend and client Billy Corgan of the Smashing Pumpkins. There were her godchildren and colleagues from some of the city’s many civic organizations (in her case the Women’s Boards of the Alliance Française, the Rehabilitation Institute, and the Joffrey Ballet). There was the dapper bartender from Fred’s, the restaurant atop Barneys. The reception afterward, at the nearby Racquet Club, featured Bloody Marys for the drinkers and Arnold Palmers for the nons, and went on well past the appointed hour. The size of the group and the warmth of the gathering were an enormous testament to Frances herself, of course, but also to the decency and goodwill and old-fashioned sense of community that mark Chicago itself.

“You can adopt the city and it doesn’t mind,” says my friend Jack Davis, a part-time resident who was once the metropolitan editor of the Chicago Tribune. I know what he means—for all the tony clubs and the highfalutin landmarks (the Art Institute, the University of Chicago, the tallest building in the Western world), there’s an openness and accessibility about the place that mirrors the plan laid out by Daniel Burnham in 1909. Burnham gave the city glorious parks and wide boulevards; he imagined Michigan Avenue as the Champs-Elysées of the Midwest and he succeeded. He also made it possible to see everything without craning upward. The skyscraper was invented in Chicago, but it’s not a remotely vertical place.

Not only is Chicago arguably the most architecturally significant city in America, it’s also the most architecturally literate. The average citizen knows who Frank Lloyd Wright and Louis Kahn and Ludwig Mies Van der Rohe were; he or she might run into Helmut Jahn at Blackbird. Two of the most important architectural prizes in the world originate in Chicago, the Pritzker prize (for modernism) and the Richard H. Driehaus Prize (for classicism). The citizens are proud of their buildings, they love their theater troupes and companies (Second City, Steppenwolf, Lookingglass), they hang out at Millennium Park and the twenty-four public beaches along the shores of Lake Michigan. They dine in some of the finest restaurants in the world (including nineteen with Michelin stars), but they’ve also canonized the Chicago Dog with its sui generis (and seriously delicious) toppings including sport peppers and an electric-green relish. Chicagoans’ devotion to their city is mercifully devoid of the smugness so palpable in places like New York and San Francisco and pockets of Uptown New Orleans before the storm. There’s a sense of engagement and civic activism; people are smart without being self-consciously intellectual. By contrast Manhattan seems claustrophobic and cliquish, a place where being embraced in the way Chicago embraced Frances requires a certain amount of gamesmanship and ambition for something more than simply to do good and live a rich life.

Carl Sandburg was right when he called Chicago the “city of the big shoulders,” and by any name it is the über–American city. It’s young (it was incorporated as a village in 1833 with a population of 200), phoenix-like (in 1871 the Great Chicago Fire leveled the entire central business district and left a third of the population homeless), and thoroughly unpretentious (it was built with the fortunes of upstart, self-made men that included Civil War profiteers, meat packers, and dry goods merchants). Its enormously diverse population includes more than a million Irish residents (on St. Patrick’s Day, the Chicago River is dyed green) and more than 800,000 Polish (until last year, Pulaski Day was a public school holiday) but also Greeks, Mexicans, Indians, Puerto Ricans, and Koreans. One of my favorite restaurants is an Asian-Latin barbecue joint called Belly Shack.

The largest ethnic group is made up of African Americans, most of whom came originally from the Mississippi Delta and other points South in the movement known as the Great Migration. Facilitated by the Illinois Central Railroad and fueled by a desire for jobs and a better life, it began during World War I and continued well into the fifties and sixties after the widespread introduction of the mechanical cotton picker. Its anthem could be Robert Johnson’s “Sweet Home Chicago,” and though he never recorded there, plenty of other folks did. The Delta may have been the birthplace of the blues and New Orleans the cradle of jazz, but it took Chicago, with its concentration of nightclubs, record companies, national radio shows, and publishing houses, to provide the resources the music needed to become bona fide international art forms. Louis Armstrong stepped off the train from New Orleans in 1922, made world-changing recordings with King Oliver before forming his own Hot Five and Hot Seven bands, and put jazz on the map. Likewise, Muddy Waters and Howlin’ Wolf came up from the Delta, plugged in their guitars and added drums, piano, and the occasional horn, and gave the world—and a generation of appreciative British rockers—the Chicago blues.

If Nora introduced me to Chicago, I got to know it with Frances. She took me to lunch at the Women’s Athletic Club, a Beaux Arts landmark that’s the oldest club of its kind in the country, and arranged a book signing at another of her clubs, the Casino, housed in a one-story art-deco building just behind the John Hancock building, the air rights to which must be worth a fortune. We ate at her neighborhood Gibsons steakhouse, went to Gene & Georgetti’s on festive occasions, and lunched—a lot—at her favorite, RL. Over the years, I grew to love the city’s overlapping neighborhoods and its uniquely American glamour (one of the sexiest nights of my life involved not much more than speeding down Lake Shore Drive in a fast car) almost as much as she did. There is a hole now in the landscape where Frances used to be, but Chicago will forever remain my kind of town. Finding the Southern Charm in Chicago