Country Music Hair Through the Decades Although their music speaks to the lives of millions of people, country singers don’t always get a fair shake when it comes to their wider influence on American popular culture. And, in particular, their influence on fashion. A Nashville writer aims to fix that by showing just how iconic country singers’ hairstyles have been over the decades.

“More than any other genre, country music can be relatable, like when a song is about working on a farm or going out on a Friday night,” the Nashville-based music writer Erin Duvall says. “Or, it can be escapist, a fantasy of who we want to be. And that’s where hair—especially hair like Dolly Parton’s—comes into play.” Though trends have evolved from the clean-cut 1950s to the sky-high hair of the 1980s, what country artists wear on their heads is an enduring topic of fascination for fans.

The 1960s straddled the line between the prim-and-proper 1950s and the wild-and-free 1970s. Musically, country saw two styles emerge: the more natural Bakersfield Sound, and the sleek production of the Nashville Sound. Hairstyles reflected the dichotomy. Bakersfield artist Buck Owens opted for a clean-cut crop. “Even Willie Nelson had his hair cut short at that time,” Duvall says. “The men weren’t really stepping out of their social norms.” Women—especially those of the Nashville Sound—were more adventurous. Songstress Patsy Cline set her hair in rollers for hours before having a hairstylist brush it out into a finger-wave look. Soon, other female singers like Kitty Wells added a step after the rollers—back-combing their hair into a towering bouffant.

The 1970s: Outlaws and Rhinestone Cowboys The 1970s built on the 1960s. The Bakersfield Sound inspired the Outlaw Movement, and the Nashville Sound paved the way for the Rhinestone Cowboys. In hairstyles, Willie Nelson lived up to the name of his 1975 album, Red Headed Stranger and let his hair grow long and his beard get burly. Women wore everything from naturally long locks (Emmylou Harris and Crystal Gayle) to larger-than-life teased styles (Tammy Wynette) or wigs. 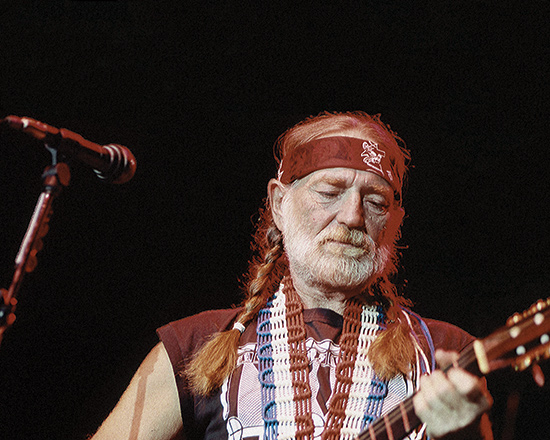 “The eighties were the most fabulous decade,” Duvall says. “Across the board, the trend in country music was hairspray, teasing, and just trying to get hair as high as possible.” Reba McEntire, Dottie West, and Dolly Parton wore voluminous styles and wigs. “The hole in the ozone might have come from the hairspray in the eighties,” Duvall jokes. There was one anti-height response, however: a cowboy hat. Garth Brooks, Alan Jackson, and George Strait were traditionalists who hid their hair. “One of the best heads of hair that you never get to see is George Strait’s,” Duvall says. “The Texan was blessed with lush, flowing brown hair, but as a genuine cowboy he hides his locks under a Stetson.”

The nineties saw more big hair and the rise of business-in-the-front, party-in-the-back. “I still do not understand the appeal of a mullet,” Duvall says. “But for some reason, pretty much every male country singer who was working in the nineties had their hair short in the front and long in the back.”

Duvall points to that era as the time when Marty Stuart cemented his claim to the “best male hair in country music” with long, fluffy locks. “While some people believe in Santa Claus,” she says, “I believe that Marty Stuart wakes up in the morning and his hair looks like that.” Nineties women experimented with multiple styles. Faith Hill wore her hair past her shoulders and then cut it into a surprisingly short bob. “As a child growing up in Texas, one of the most shocking things I can remember was when Faith Hill cut her hair,” Duvall says. “And when I interviewed artists for this book, everyone remembered that moment.”

“We are in a ‘no rules’ moment,” Duvall says. “While George Strait is always going to look like George Strait, on the fantasy side, you’ll see more guys rocking the man bun and women shaving off some of their hair. Country music is becoming very inclusive and there is room for everybody and their hair.”