Pack your bags for these emerging culinary hotspots These five cities, emerging as strong eating destinations in the South, are part of The South’s Best Food Towns, selected by the editors of  Garden & Gun. See five more established dining cities here, and have your say about our picks on Facebook or Twitter. #SouthernFoodTowns

Everyone knows Birmingham’s culinary evolution began in 1982, when Frank Stitt debuted Highlands Bar and Grill and began applying French techniques to Southern classics. But some might not realize Stitt’s celebrated kitchens also turned out the city’s next generation of talent. Chris Hastings, of Hot and Hot Fish Club and OvenBird. Chris Dupont, of Café Dupont. Ashley Tarver, who will serve Mediterranean-infused regional standards (harissa deviled eggs, for instance)
at the upcoming Za’atar Bar & Kitchen. Chefs like these helped lead downtown’s renaissance, which has lately added the Pizitz Food Hall, featuring Ono Poké, with its vibrant soy-and-ginger-marinated fish; the Alabama Biscuit Company, where fillings include local honey and fried bologna; and Fero, offering Italian-inspired dishes like burrata panna cotta. Other openings include Big Spoon Creamery, which scoops seasonal flavors such as sweet potato pie, and the midcentury-mod Atomic Bar & Lounge, where you can don cheeky costumes (a giraffe, Elvis) while you sip equally playful cocktails. 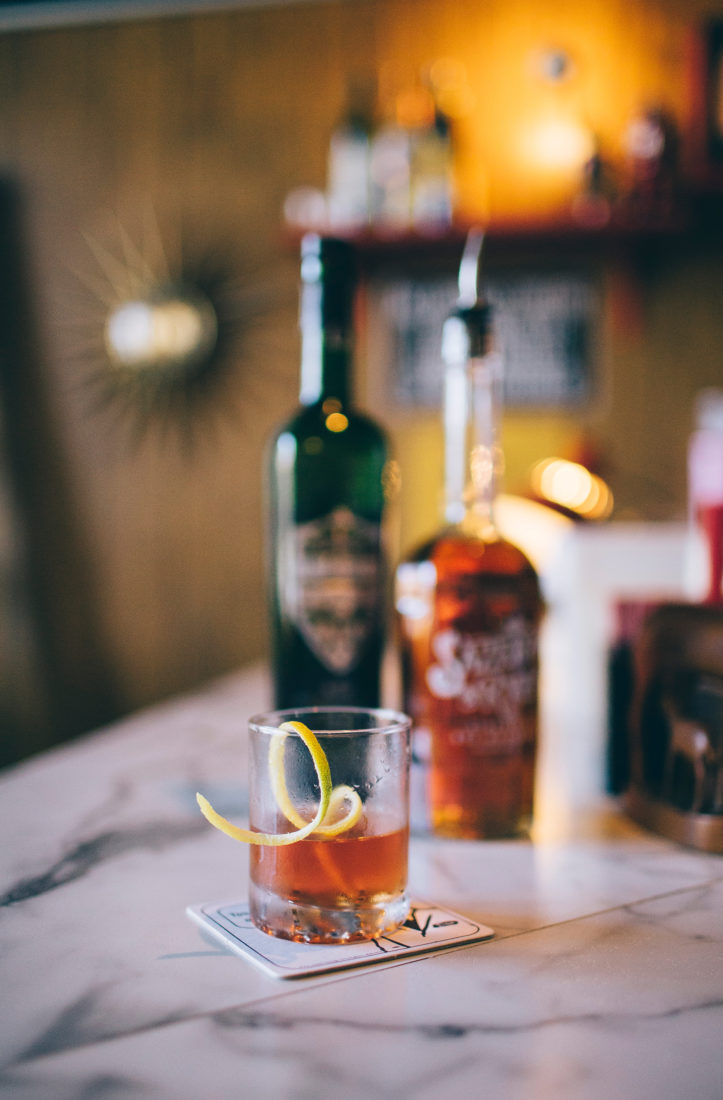 Vault & Vator’s concealed location may be the surest sign of Greenville’s transformation into a true eat-and-drink destination—the owners, Joe and Darlene Clarke, were confident patrons wouldn’t balk at a bar squirreled away speakeasy-style in the West End. The cocktail cellar is just one of the assured additions to a downtown dining scene spurred by Soby’s, which introduced its refined Southern classics twenty years ago. Asheville’s White Duck Taco Shop and Biscuit Head have set up shop, while Charleston’s Husk and Fork & Plough—a butcher and luncheonette from High Cotton’s chef—are coming. Along Main Street, Ji-Roz makes Sunday mornings synonymous with saganaki and eggs, and Jianna whips up squid ink radiatori and other polished pasta. Best of all is the Anchorage, a West Greenville charmer showcasing the gentlest aspects of Blue Ridge cooking—mountain trout and butter beans are in good hands here. A food hall at the Commons aims to open next spring. Like many mountain men, Joseph Lenn loves to fish. His deep appreciation for the art extends to J.C. Holdway, which the chef—who won a James Beard Award cooking at Blackberry Farm—launched in downtown Knoxville a year ago. There, majestic Appalachian dishes include a smoked North Carolina–trout-and-kale salad with crumbled cornbread in creamy vinaigrette. The restoration of the Bijou and Tennessee theaters may have jump-started the downtown revival some years back, but these foods of the region are taking Knoxville into the future. You can see the effect at Knox Mason, where Matt Gallaher (former personal chef to Kings of Leon) turns out the likes of sourdough bread pudding with mushroom ragout, Sea Island red peas, and Jerusalem artichokes. You can also find terrific ’cue, crepes, sushi, tacos, and local brews (hopped and beaned) in the vicinity, and rich Cruze Farm ice cream at markets such as the Three Rivers co-op. Weekends are best enjoyed with a bodacious brunch of cornflake-crusted chicken and biscuits at Oliver Royale. The Research Triangle’s sense of discovery has spread to local stomachs. Supported by a thriving creative class, however, Raleigh has especially flourished. Ashley Christensen and her lauded Poole’s Diner set the course a decade ago with seasonal comfort food, and the chef has not only expanded her empire to include more eateries (Beasley’s Chicken + Honey, Chuck’s, Death & Taxes) and Fox Liquor Bar, but her success also enabled an onslaught of other openings. Scott Crawford left hotel fine dining to unleash Crawford and Son, which attracts regulars with blue-plate specials like short-rib ravioli. St. Roch Fine Oysters + Bar nods to the chef Sunny Gerhart’s New Orleans roots—don’t miss the saltine-crusted boudin patty. Brother and sister Vansana and Vanvisa Nolintha dreamed up Brewery Bhavana, a lovely combination of brewery, dim sum restaurant, florist, and bookshop. French American bistro Royale plates well-executed classics such as duck à l’orange, while a butcher shop and market enhance the farm-to-table fare at Standard Foods. Two food halls—Morgan Street and Transfer Co.—will arrive this fall and next summer. Fried chicken and sides at Beasley’s.

Green benches once dotted St. Petersburg, a symbol of hospitality that became a punch line—a seat in God’s waiting room, anyone? The city finally got rid of them, but now they’re back in spirit at Green Bench Brewing, one of St. Petersburg’s dozen or so microbreweries. The craft beer craze jumped the bay from Tampa with a vengeance a couple of years back, which in turn begat microdistilleries and other food businesses. The new Ichicoro Ane izakaya, for example, will feature ramen, and the city also now boasts the Mandarin Hide’s craft cocktails and the artisanal pickles of the Urban Canning Company. St. Pete has even attracted interest from afar: New York’s Empire Oyster launched a pop-up oyster bar in the Edge District’s Intermezzo Coffee & Cocktails. Chefs who worked together in Asheville opened the Reading Room, building a menu around produce from their own garden. And serial restaurateur Michael Mina, with Don Pintabona—former executive chef at Robert De Niro’s Tribeca Grill—parachuted in with Locale Market.