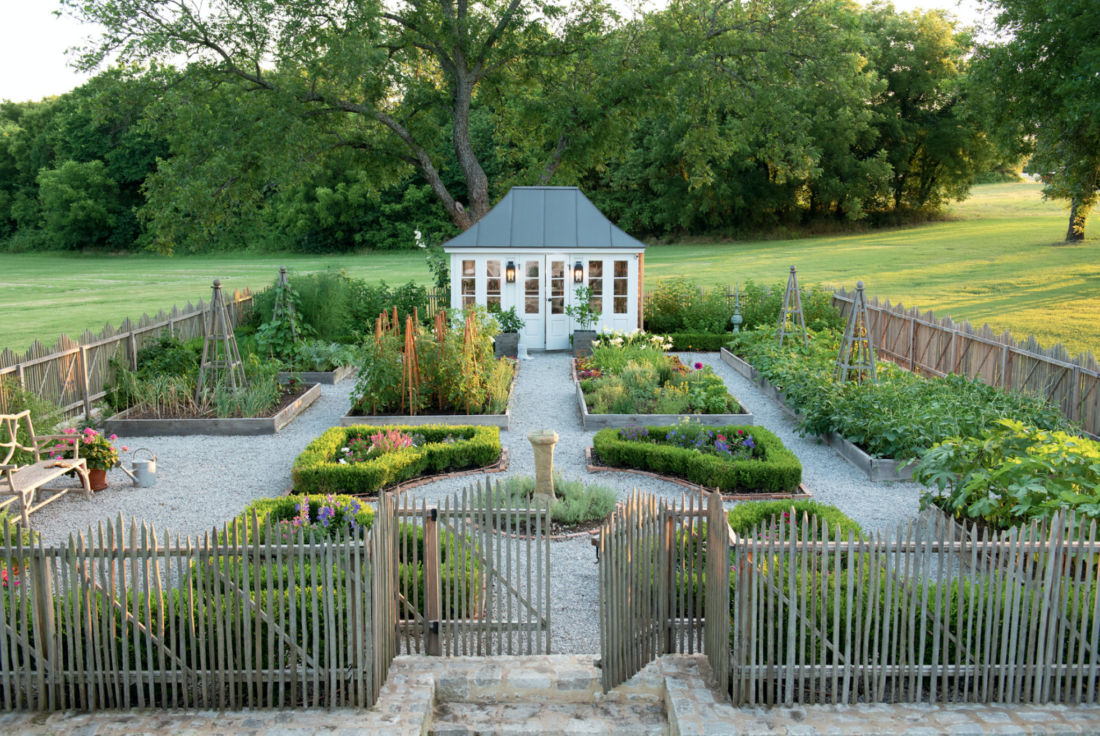 In the United Kingdom, land of castle ruins, watchtowers, and country gardens, there’s such a reverence for eighteenth-century follies—whimsical and sometimes charmingly pointless edifices—that an organization called the Folly Fellowship was formed “to protect, preserve, and promote follies, grottoes, and garden buildings.” In the American South, land of homegrown vegetables, pleasure gardens, and cocktail hours, follies have also enchanted landscapers for generations. “The earliest American follies were follies of fashion, copies of English country garden structures,” says Gwyn Headley, an architectural historian and the Fellowship’s cofounder. “You see, in Britain, we usually divide them into follies of fashion and follies of passion.” The South has no shortage of either type, whether it’s a graceful gathering nook in Georgia, a stately potting shed in a Texas kitchen garden, or the plucky, funky folk-art manor two South Carolina antique dealers built for their devious chickens. “I believe there has to be a degree of eccentricity for a building to be considered a folly,” Headley says. Eccentrics, creatives, gardeners—all are welcome to take a gander inside these three Southern follies.

When the onetime hurricane Irma came through Atlanta as a tropical storm in September 2017, forty-plus-mile-per-hour winds took down a large old red oak in Michelle and Leon Jones’s backyard, leveling a little-used garage in the process. “I was sad about the tree, but the garage was old and too small,” Michelle says, “so I thought, Now we have a clean slate.” The family’s yard in historic Brookwood Hills going from shady to sunny allowed the couple’s landscape architect, John Howard, to reconfigure it with a lawn surrounded by hydrangeas and a view of Midtown Atlanta.

Working with architect Hoyte Johnson, the Joneses came up with a design for a multipurpose folly as a centerpiece. The new structure has three sides of windows and doors and a pyramid-shaped copper roof; small clerestory windows let in even more light. Its classic-meets-modern design includes copper lanterns and wood-planked storage walls, plus a back area to stash garden tools. Rosemary, creeping thyme, and Immortality iris in the adjoining garden add texture but don’t overwhelm.

With Atlanta’s mild weather, the doors stay open most of the time—although the folly has heat and AC. “We use it almost every day,” Michelle says: as a work space for their twentysomething daughters (“The setting is great for a Zoom meeting”), a lunch spot for a tennis group, a cocktail setting for friends, and as the scene of special-occasion dinners, including the Joneses’ annual Christmas brunch. Michelle loves simply puttering around the garden—now that she has a place to relax in afterward. “I’ll go outside to pull one weed,” she says, “and next thing you know, it’s been eight hours.”—Lisa Mowry

In a small town north of Dallas, Paige Bingham and her two brothers commissioned the plans for a kitchen garden anchored by a custom potting shed and presented them to their mother as a remarkable Christmas gift. “She was thrilled,” Bingham says, “and even more so because she could be involved in the collaborative process of where we put the trellises and what vegetables to plant where.”

The family enlisted the help of the Dallas interior designer Lisa Luby Ryan, who envisioned installing symmetrical raised beds to lead the eye. “The shed is the focal point,” Ryan explains. “It’s what makes the garden so cozy and quaint, and yet it works. The family store their tools and bulbs and twine there—anything they need in the garden.”

Ryan hired Hillbrook Collections, a garden cottage builder in Pennsylvania, to create a curved-roof structure and deliver it on a flatbed partially unfinished. Then she added the final Texas touches of a Granbury limestone back wall, timber beams from Waco, and a textural rooftop made from paint grip, a bonderized steel that appears pleasingly weathered. “I wanted the cottage to look like it had belonged there forever,” Ryan says. She turned antique tobacco-drying sticks into a rustic fence, and the family seeded zinnias and lavender and planted onions, tomatoes, tomatillos, and cilantro—everything they might need to make a batch of pico de gallo to share.

“Omelette is bossy; Chequers isn’t too bright, but she’s fancy; and Camilla, she’s the queen and the mastermind,” says Michael Greene, profiling his three chickens and describing the schemes they hatch to sneak into his antique store, Artifacts Greenville. Greene can’t understand why they want to get inside so badly (perhaps to scour the shop for feather-edged platters or gold-rimmed deviled egg plates?), especially after he and his partner, Scott Johnson, built the birds a mansion of a chicken coop. “Well, it started as a chicken coop,” Greene explains, “and then the devil and bourbon got involved.”

The birds’ Greek Revival–inspired villa features columns, a ramp, a front porch, and a pergola perch. “Once we had the structure built, we talked about trimming it in traditional molding,” Johnson says. “But then we decided to do it in a folk-art style, layering found objects to create patterns and shadows.” They glued rows of alphabet blocks around vintage bird figurines and stuck on rows of bottle caps and seashells and toy soldiers and golf clubs from South Carolina thrift stores. “And then,” Greene says, “we painted it all a bright lavender, because the color played so nicely with the greenery,” which includes banana trees, boxwood, collards, and other pass-along plants that customers share. “We’ve had visitors from Charleston to China stop through just to see the chicken coop,” Johnson says. Artifacts opens its doors every day but Sunday and Monday and hosts regular outdoor art gatherings in the garden. Just keep an eye on Camilla—she’s forever on the lookout for accomplices who leave the back door open.